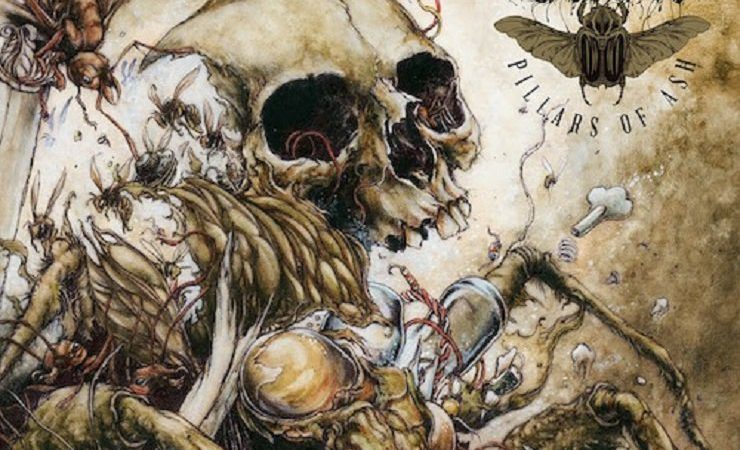 Savannah’s sludge power trio BLACK TUSK just released their first album in five years since the great Set The Dial. Not only Pillars Of Ash marks their first record without their late bass player Jonathan Athon, but this pillar surely didn’t leave us cold. First of all, let’s face it: gentleness has never been BLACK TUSK’s strong point – but that’s old news, isn’t it? More hardcore than ever, forceful, never losing the greasy and dirty aspects of a good stoner record… Yep, that’s some real sludge right here, and there will be no survivors.

From the very first song “God on Vacation”, the tone is set with fast riffage, powerful and energetic drumming: we’re gonna get our money’s worth. Then come gems like “Black Tide”, “Beyond the Divide” or “Born of Strife”… The further we get into this album, the more complexity we discover, as “Still not Well” and “Walk Among the Sky” bring changes of pace and more elaborated guitar soli, “Punkout” is adorned with a very present bass. Icing on the cake: the album ends on a startling song, “Leveling”. Although it kicked off with the violent energy of punk, it ends softly as if the band wanted to frustrate us and compel us (no need to compel me, I volunteer!) to listen to the album all over again.

But enough flattering, let’s talk about the flaws of this record. Firstly, as always with Black Tusk, the monochord vocals can weary the listener. Then the length of the album: 11 songs, which majority barely clocks in at three minutes, that’s a little bit too short.

On the whole, Pillars of Ash is a success, when plenty of bands (including their friends Baroness) soften their sound throughout the years, BLACK TUSK have kept it raw and aggressive, and they can be proud of it. This new album is a pleasant offering: classic and straightforward BLACK TUSK, and paradoxically also surprising and innovative, like two heads of a same coin. I went with the flow and for good: crank the volume up and push the play button as much as needed, you won’t regret it.