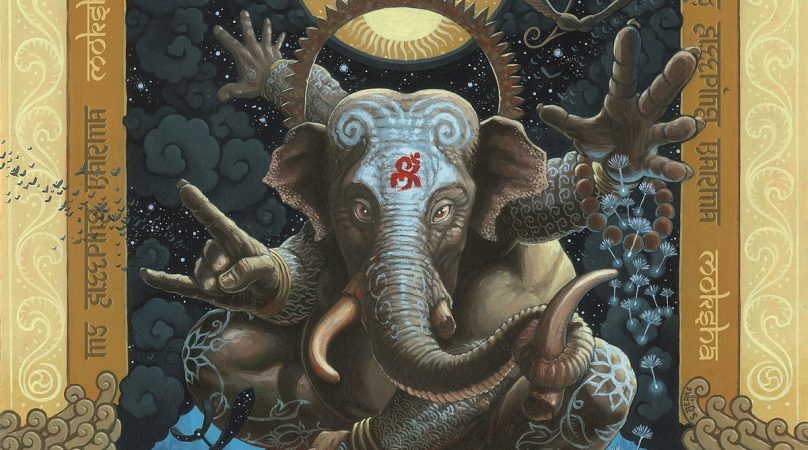 Hailing from Aschaffenbourg, MY SLEEPING KARMA is a German foursome playing instrumental music at the crossroads of psych rock, experimental rock and stoner. I’ve missed out on this band until lately, and I must say that the discover was a thrill. Last year, MY SLEEPING KARMA released their fifth ful-length Moksha. With a huge Ganesh on the cover, the mood was once again set: the trip would be a mind-expanding one. The listening is flowing, even though we get to travel across rather peaceful or lively and sinuous soundscapes. I’m not usually a fan of instrumental music, yet this album needs no lyrics.

With seven tracks interspersed with interludes (their previous record Soma was built on the same pattern), we discover MSK’s rich and colored world and influences, between chilled and aerial riffs and heavier headbang-inducing parts. We’re constantly awaiting for the next move, wondering what the band is up to next.

If I had to keep only one song, it would be final track “Moksha”, which means “liberation” in Sanskrit. This song unveils all that MSK is about: sonic power and a great songwriting. Guitar and piano intertwine smoothly on intense and bewitching parts, a wonderful work that is completed by Canada’s Michael Olsen on cello. Within almost ten minutes, the band showcase theur talent for delivering mind-travelling songs and rolling out a sonic path of great quality to the listener.

To sum Moshka up in two words: incredibly rich and trippy. Headphones are the best way to get into it and seize all colors and details, or in a car for a long-haul trip, or even late at night to escape… Highly recommended!