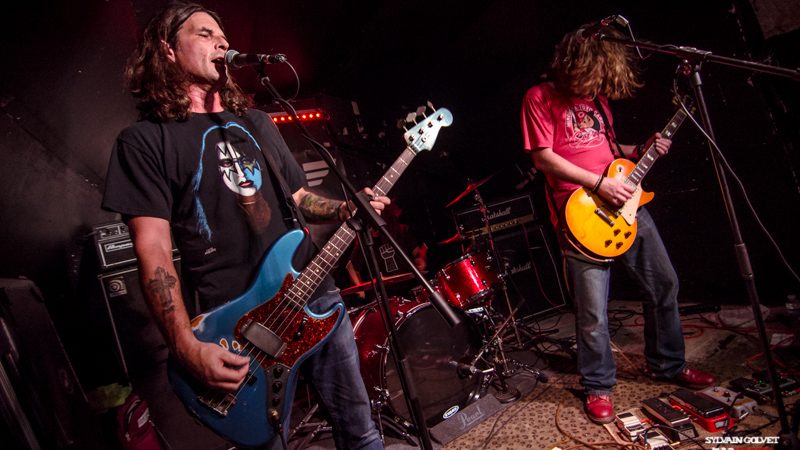 A few lineup-related imponderables have made this Stoned Gatherings show a single-band one, also exceptionally taking place at La Mécanique Ondulatoire instead of that good old Glazart. SG’s DJ-in-chief Mathieu is in charge of warming the place up by spinning some well-picked hard rock and stoner vinyls. We can’t complain of the situation, as the atmosphere is rather intimate, couches are cosy, and more importantly: the beer here is better than Glazart’s. We’re thus all in the right mood when New Jersey’s legendary trio THE ATOMIC BITCHWAX takes the stage in the seedy basement of the Parisian venue.

Even though we’re already well aware of the incredible dexterity of these three rock wizards (more like titane of hardened steel specialists, though), the fact remains that we can’t help but goggle and get our lugholes wide open in front of the crazy riff charge that’s coming out of the amps right now. Well, we won’t open our ears too widely though, because THE ATOMIC BITCHWAX play LOUD AND HARD, DAMMIT! No rest for the wicked nor our little brains, which are being filled with an explosive and hair-raising mix of the last and first record (plus a few excerpts off their extensive catalog). Even their pop-ish “So Come On” gets treated the high-voltage way. What we like about TAB is this ability of theirs to blend catchy and highly identifiable riffs & vocals with a technical maestria specific to hard boogie, without the cheesy aspect. Something even more peculiar to this band: the way they sail through the scale with so many high and low notes, bass and guitar being in unisson all the way through. No interlude during this 15-track and 50-minute long set, except for a short break right before an encore song that does the splits between the cover of THE original psych anthem “Astronomy Domine” and pop/punk banger “Shit Kicker”. A heated pogo ensues in the first rows. Was this show too short in time? On paper, it was. But de facto, the price-groove ratio was unbeatable.