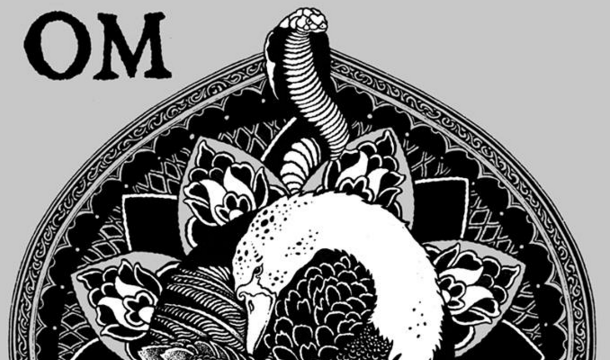 “There’s nothing like a burst of ecumenical rock to screw these bastards!” This comment, left on the Facebook event page for OM’s concert – taking place just a few days after the November 13th events in Paris – set the tone. Seeing the California trio live in Paris is always a special event. That night, it was also a personal challenge, a group therapy and a liturgy. But also, and mostly, a superb musical evening.

It’s extremely rare to feel the grip of fear on one’s way to a rock concert. Some may experience whiffs of anxiety before seeing Rage Against the Machine (“which bone am I most likely to break tonight?”) or Bob Dylan (“will he butcher his own repertoire, and all of my youth with it?”). But fear? For a generation or more, we had forgotten that our passion for saturated guitars could turn us into targets. I admit to thinking, looking at Om’s universe under a “new” (= paranoid) light, that there was more than enough here to excite a few devoted maniacs. Hence, upon my arrival at the Divan du Monde, I don’t feel very secure. I take more than one look at the emergency exits, and I’m probably not the only one.

Belgian rockers BLACK HEART REBELLION have the difficult mission of bringing back music, rather than terror and grief, at the front of everyone’s minds. Supported by a powerful rhythm section, and a discrete guitar, frontman Pieter Uyttenhove howls at us like a mad preacher. Unfortunately, his vocals are not diverse or clean enough to keep our attention. The music features all kinds of percussions, but very few memorable riffs – and the ones that do emerge, drone on and on for a solid ten minutes…

Lesson #1: sometimes, when trying to create musical space, you actually create a vacuum. Lesson #2: save up on the “tambourine, cowbell and maracas” budget; invest in a proper microphone. Musically speaking, the Belgians’ performance was not completely satisfying (though some of their songs work very well in vinyl format). However, they did manage to release some tension in the room: responding to the singer’s ferocious beating on an alpine goat bell, someone in the audience lets out a glorious bleating sound, echoed by a great wave of laughter.

It’s time for OM’s ecumenical rock to take the stage. Under enthusiastic applause, the trio delivers an intense performance, featuring many gems from “Advaitic Songs” – the band’s latest masterpiece, until the new opus (supposedly) set for release in 2016. Om’s rhythm section, its historical core, is of course sumptuous. Al Cisneros mesmerizes the audience with tortuous bass lines, delivered from the tip of his fingers, and sober yet bewitching vocals. Emil Amos is a human library of inspired breaks and fills, each of them different, delivered with amazing precision.

However, the newcomer Robert Lowe is really the one who stole the show for me. Guitar, percussions, keyboard, lyrical singing… a true musical Swiss knife, capable of inspiring comments such as: “man, he’s playing the shit out of that tambourine!” Thanks to this resourceful recruit, Om recreates on stage the incredible sophistication it has reached on record. Exorcizing the fear, sadness and cluelessness of its Parisian audience required no less. Tonight, no grand speech was made for the victims of November 13th. But Uncle Al went so far as to say “thank you for coming, it’s an honor to play for you“… which, given the man’s rather introvert nature, is the greatest possible “Om-age”.