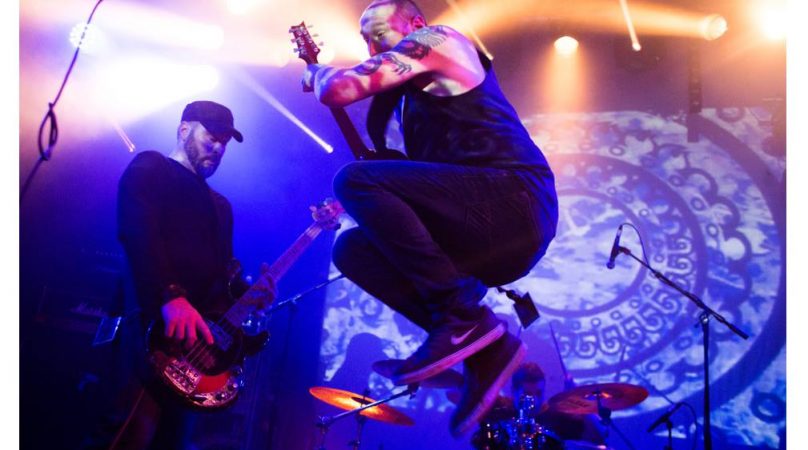 Today, a web search for “Up In Smoke” will mostly direct you to a little-known stoner buddy movie from the 70s, and a mythical 2000 tour with Snoop Dogg, Dr Dre, Eminem and co. This might not be the case for much longer, if Sound of Liberation keeps on assaulting Europe with evermore varied and exciting line-ups. On this February batch, Up In Smoke featured Napalm Records’ finest bands, warming up the stages for an equally tempting Belzebong/Stoned Jesus/Mars Red Sky combo in March. (PHOTOS: ImmortalizR)

After spending half an hour in the cold waiting for a frisk search (that’s a rock concert in Paris 2016 for you), the duty falls on Melbourne’s own MAMMOTH MAMMOTH to warm up our ears. “Bigger than Jesus, louder than hell”: that’s the spirit, printed on 4 x 3 meters behind the band – even the Beatles had not taken it that far. From then on, it’s pretty much what you‘d expect: fat riffs, huge sound, and an extra layer of fat riffs on top. It may not be very subtle but it works, and it’s done with a lot of heart. Mikey Tucker mingles with the pit, passes around his bottle of Jack Daniel’s and voices his relief of playing for human beings rather than wombats! The last one for the road is “Kick Out The Jams” from MC5, who now seem to be the official providers of end-of-set covers for desert bands. Now moving on to GREENLEAF! Staffed by the very best among the Swedish stoner scene (Demoncleaner, Lowrider, Dozer and even Truckfighters at some point), the variable-geometry band has featured no less than five singers. It’s hit the jackpot with Arvid Jonsson, an intense vocalist and a true beast on stage. Jonsson nails every single note he’s sings, and feels the ones he doesn’t – convulsing frantically through guitar solos, twisting at every drum break. He does catch a lot of light, but also leaves his fellow musicians the space to express themselves. Greenleaf is rich with what we’d missed during the previous set: an acute sense of nuance and groove. And there you have it: a side-project that’s cooler than 90 % of ‘real’ bands – and no less productive. Time for MY SLEEPING KARMA, the evening’s undeniable headliners, judging from the clap-o-meter. It’s the kind of gig that makes you feel like writing zero word… or a thousand. I must admit that I completely stopped taking notes after five minutes, under the influence of this trippy, shamanistic instrumental rock. There’s nothing like the sight of these two bearded giants, bass and guitar looking like toys in their hands, trading delicate melodic lines when you’d expect them to trade punches. These guys have mastered their sound completely – and yes, over time, one could get bored traveling through such a coherent, and somewhat predictable, universe. I have felt that way before, after repeated listening of their recorded stuff. But there’s nothing of that sort tonight. The German mesmerizers deliver just the right amount, so that the audience risks neither a shortage, nor an overdose of their music. Their minds at peace, their chakras wide open, the Parisian audience can now serenely reflect on the Great Existential Question that’s keeping all of us awake at night: on March 4th, should I pick Up In Smoke #7 or Stoned Gatherings @ La Villette?