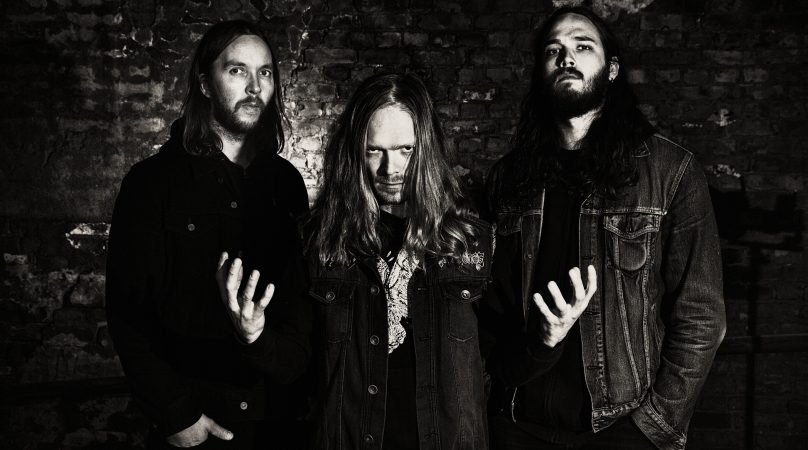 It’s gargantuan, so bleak that your eyes won’t stand daylight anymore… They bring beauty in doom, majesty in terror: ladies and gents, The Heavy Chronicles is proud to be hosting the audio premiere for “Vargariis”, the crushing new album from Oslo’s blackened doom metallers TOMBSTONES, due out this December 4th on Soulseller Records. Full album streaming below.

Taking their doom to another level (or depth, should I say) of bleakness and sonic slaughter, that’s what Norwegian trio TOMBSTONES have just achieved with their gigantically heavy fourth record “Vargariis”. The successor of “Red Skies and Dead Eyes” was recorded live over ONLY three days and a half at Studio Underjord in Sweden, so you can easily picture the kind of audio rampage that took place in there.

Worshippers of mega-heavy doom acts will worship this even more, but don’t get me wrong: there’s a huge sense of melody and groove in “Vargariis” that outfits like Conan or Ramesses could never achieve. So here’s a full-on treat for your ears, with this fantastic distortion-laden album streaming in full below:

TOMBSTONES has taken up on their Norse heritage, evolving from their previous stoner-influenced sound, now descending into the dark side of the gloom. “Vargariis” finds the band leaning towards the bleak and desperate, assaulting the listener with their blackened, thunderous wall of fuzz and despair.

Two years of intensive touring alongside bands such as Eyehategod, Church of Misery, Egypt and Witch Mountain have kept the band active, and the result unveils in the energy and live presence felt on “Vargariis”.

The last couple of years TOMBSTONES has appeared on the legendary Roadburn Festival, Desertfest, Freak Valley Festival, Muskelrock, Doom Over Leipzig, and tours in support of “Vargariis” in 2016 are in the works