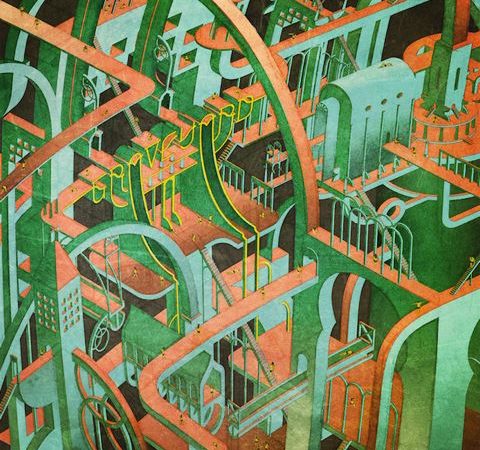 Rock may be dead, but its corpse is still moving. From its tremors emerge bands like GRAVEYARD, capable of toying around with the genre’s habits and customs while adding their own touch. « Classic rock with a modern roll », as Nuclear Blast Records aptly puts it. More inspired and skillful than ever, the Swedish quartet has taken things up a notch with Innocence and Decadence, which should easily find its place among the best heavy records of 2015 – and that, given all the outstanding new releases we’ve heard this year, is saying a lot.

The last time we heard from Graveyard was a oh-so-slight disappointment. Released barely a year and a half later after the awesome « Hisingen Blues », which had propelled them in to orbit, « Lights Out » had the flaws (and occasionnal brilliance) you’d expect from such hurried creations. After a delicate change in personnel – former singer/guitarist, Truls Mörck, taking over the bass from founding member Rikard Edlund – Graveyard decided to take its time on this one. A mythical studio, Atlantis Grammafon (once host to all of Sweden’s top musical ambassadors, from the Hives to Opeth, and even ABBA), a producer coming from the jazz world, in order to spice things up: the will to do things right is perceivable everywhere on the album.

One can also feel the band’s intention to stand out among the crowd of « retro » Scandinavian bands – one of Sweden’s main exports, alongside flat-pack furniture and fermented herring. It keeps coming back in Graveyard’s interviews: their frustration of being labelled as nostalgics; their wish to write their own page in a rock history that they have come to know by heart. « The Apple And The Tree », the record’s first single, sums up this attitude in a nutshell: while paying a completely intentional tribute to Dire Straits, Joakim Nilsson sings about his sickness of « people telling us who we are » : « I’m nothing, and something you’ve never ever seen / Life’s a repetition, how it’s always been ».

Around this rather surprising track are more typical Graveyard songs : short and angry ones like « Magnetic Shunk » and « Never Theirs To Sell », but also languid ballads such as « Exit 97 » – all of them very nicely done. The album really takes off with « Can’t Walk Out », never to touch the ground again. The band finds a perfect balance between energy and melancholia, nervous riffs and psych arrangements. Punctuated by bursts of distorsion, striking like thunder every couple of measures, this track is pure ear-candy.

« Too Much Is Not Enough » is a risky but successful incursion into the realms of soul music… with the unexpected help of female choirs, which tends to show that Graveyard has many tricks up its sleeve – bringing Truls Mörck back behind the mike on « From A Hole In The Wall » is another one of them. Boosted by supersonic drumming and roaring guitars, Mörck’s laid-back singing has an innate badassness to it that will make you want to rob a bank or cruise down the highway at full speed (or both). Guitarist Jonatan LaRocca-Ramm also provides ‘guest’ vocals on « Far Too Close », and it sounds like Josh Homme with a slight cold and a Swedish accent – I mean that in the best way possible. Most rock bands don’t have one good singer to begin with; Graveyard has three. It may not be the most efficient sharing of resources but well, who am I to judge?

I could go on about « Cause & Defect » and its incredibly catchy vocal gimmick, « Hard Headed » and its jazz-rock fury, « Stay For A Song » and its glockenspiel outro that gives me goosebumps every f—– time. But I’m short of space to do that, and I wouldn’t want to reveal too much of the album’s surprises. I’ll leave you with this confession, rather than an endless litany of compliments: even though I listened to « Innocence And Decadence » approximately 450 times to prepare for my interview with Joakim Nilsson, and probably a thousand more for this review, I know all too well that once the last word is written I’ll press play again… just for the heck of it.