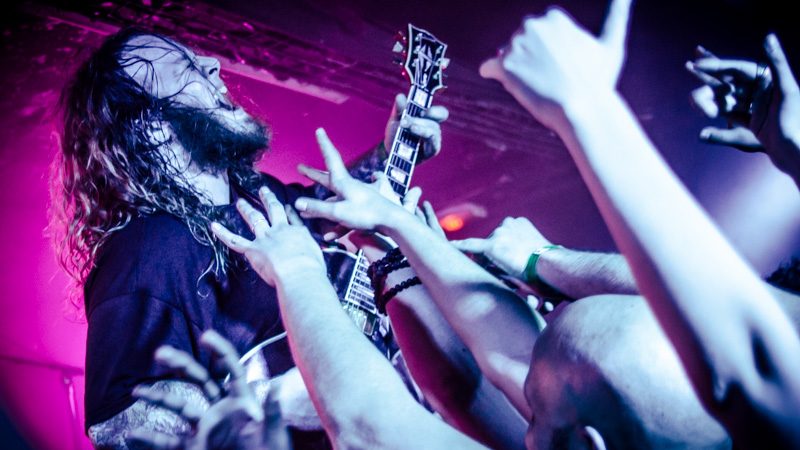 Flayed, Texas Chainsaw Dust Lovers, The Midnight Ghost Train, Black Rainbows: the line-up felt like a mini-festival for the 100th edition of Stoned Gatherings in Paris last Sunday. An opportunity to get our fill of testosterone-heavy desert rock, but also pay tribute to an already venerable institution, which has managed in a few years to (finally!) put Paris on the European – and even global – map of stoner rock. (PHOTOS: Sylvain Golvet)

Hailing from the south-east of France, FLAYED is a six-piece band : bass, drums, two guitars, keyboards and a singer, that’s a lot of people on stage – and in the pit, too. The parisian audience showed up in numbers on this Sunday afternoon, at a time when « normal » people are busy finishing up Granma’s apple pie. The band is obviously thrilled by this unexpected turnout, and they manage to pass on these good vibes to the audience. Maybe FLAYED need more subtle and refined songs to move from the « cool opening act » to the one that gives you the urge to listen to their music again once you’re back home. On stage though, the energy and generosity of their performance seems to be convincing everyone… Everyone who stuck around, that is. During the break, I realize that twenty-or-so people have taken shelter at the bar outside. « I only stayed for half a song, it sounded like a sausage fest! », I hear someone saying. The Stoned Gatherings audience can be merciless at times… 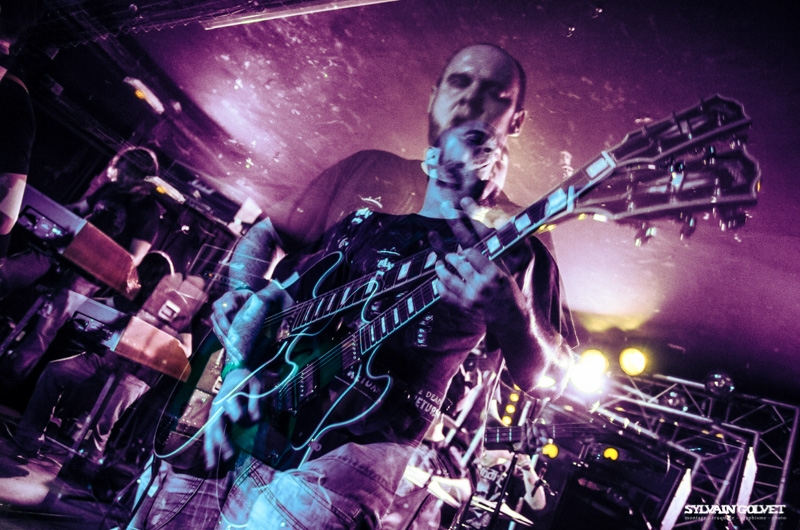 Another « made in France » stoner band, THE TEXAS CHAINSAW DUST LOVERS, now steps onto the stage. They are from Paris, but it’s plain to see – starting from the band’s name – that these guys draw their inspiration from the United States, the half that’s below the Mason-Dixon line to be precise. It’s true that the deep South is the home to the finest bluesy/groovy stoner rock (e.g. Wo Fat) and sludge (e.g. Eyehategod) – but it’s hard to pretend that you’re from there, when you’re more used to the subway than Highway 61, and live in a one-bedroom flat rather than a ranch. Still, TEXAS CHAINSAW DUST LOVERS’s music is more than honest, save from a lead guitar that tends to forget itself. Their cover of southern folk standard « Man of Constant Sorrow » is not only bold: it’s very well done. Overall, it’s a pleasant surprise, but the band has yet to recreate on stage the feeling they have on record – with a banjo, a Jew’s harp, more confident singing and some backing vocals helping to reach that good ol’ redneck sound. 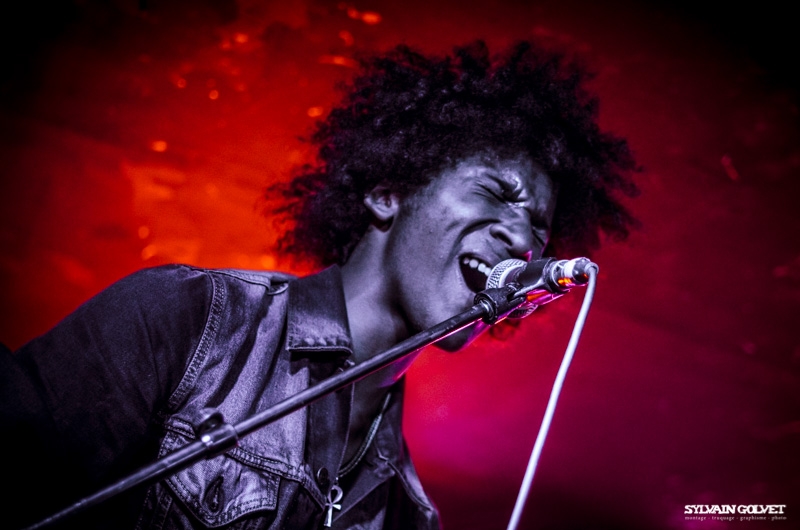 For the insane lads of THE MIDNIGHT GHOST TRAIN (from Kansas, yeehah!), however, the South is not a stage costume: it’s a way of life, and you can hear it from their very first note. Even between songs, singer/guitarist Steve Moss croaks more than he speaks (is this how he also orders coffee or says hi to people in the street?) And when he uses that surreal voice to sing, he does so with insane intensity and accuracy – reciting his lines like a theater actor. It’s like the expression « power trio » has been invented for them : THE MIDNIGHT GHOST TRAIN’s irresistible force on stage brings their songs to a whole new level, turning pleasant tracks (on vinyl) into war machines (live). These guys get crazier and crazier as they go, and the audience follows them into madness – everybody’s happy with getting rolled over. A good atmosphere indicator: it’s getting difficult to write on my little notebook without suffering the invasion of an elbow or a knee. Man, this is f*cking awesome ! 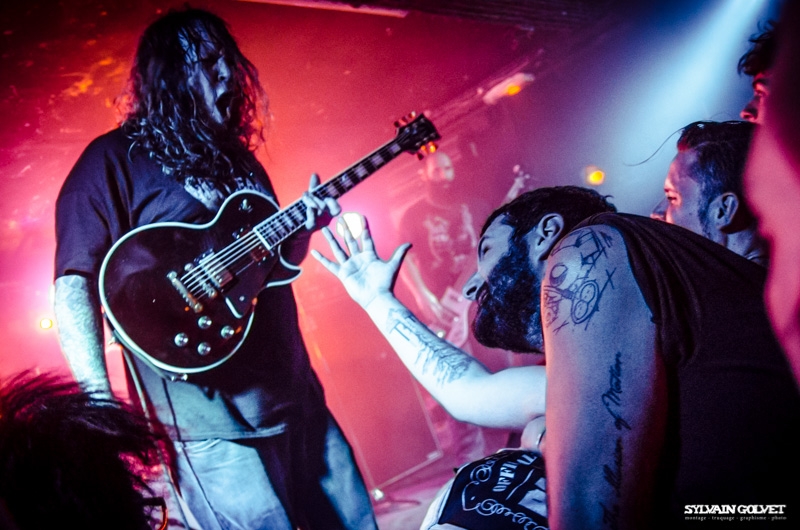 Even though BLACK RAINBOWS are the (theoretical) headliner, I’m honestly wondering how the Italians will manage to top that. The answer is: hardly. Though the band boasts over 300 gigs on their website, everything doesn’t fall right into place – the singing, very « Jaggery » on record, lacks power and is drowned in reverb ; the bass falls behind too often ; while drums are doing the job, nothing more. BLACK RAINBOWS simply cannot match their predecessors on stage when it comes to short and energetic tracks ; they are at their best when they slow down the tempo and stretch the groove. The very melancholic « Cosmic Picker » finally pulls me in ; from that moment on, I stop comparing them with what I’ve heard before, and start enjoying what I have in front of me. A hearty MC5 cover (« Black to Comm’ ») to finish things off, and you get a very honorable – if not truly exciting – set. 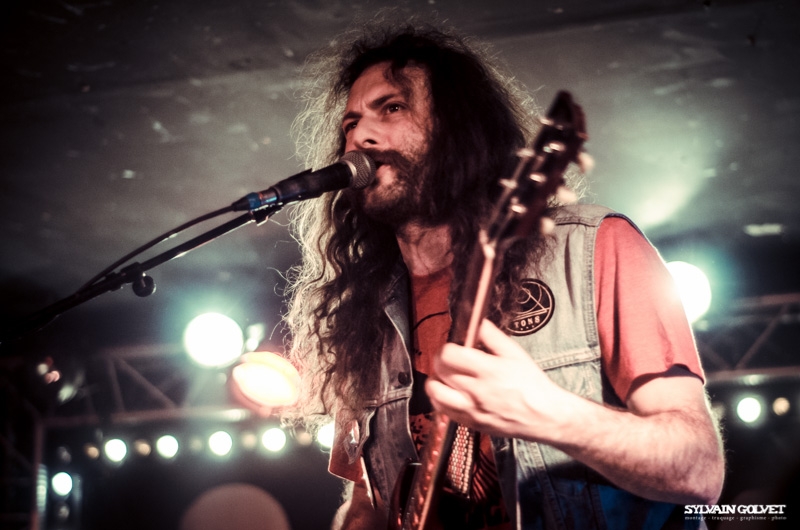 Overall, Stoned Gatherings really went all out for their 100th edition. I have to run before the birthday cake and DJ set, but I feel like I’ve already had more than my money’s worth! Long live the Gatherings…