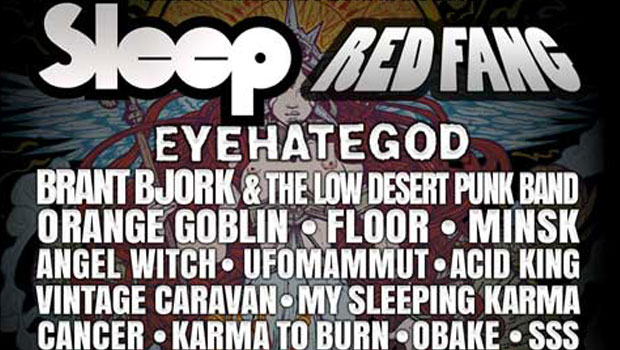 Since the summer, they’ve been teasing us with names all the people among the heavy scene worships unfailingly: Sleep, then Orange Goblin, My Sleeping Karma, Red Fang, Brant Bjork… Yep, the DESERTFEST LONDON promoters know how to make their audience happy: that’s why many people out there have been planning their weekend in Camden for months now, because they know that, regardless of the lineup of this fourth edition of the London-based heavy/stoner/doom festival, they’ll have a f***ing great time anyway. This week’s announcement made us drool all over our keyboards, with EYEHATEGOD plus a dozen more bands we’re looking forward to discover on the different stages throughout the weekend – especially as the lineup is getting subtly more eclectic this year. THC puts you in the know.

The artwork below speaks for itself regarding the already beefed up lineup of this fourth Desertfest London. The weekend will be tinged with a subtle heavy metal touch thanks to the Metal Hammer Stage (Angel Witch, Cancer and SSS are already on our to-do list) on the Sunday, while the fine folks at The Quietus brought their usual batch of obscure bands hailing from the depths of the heavy scene, giving us hints of a very FILTHY Saturday at The Underworld.

For the record, there’s only a dozen of bands left to be confirmed before the lineup gets complete. See y’all in Camden?