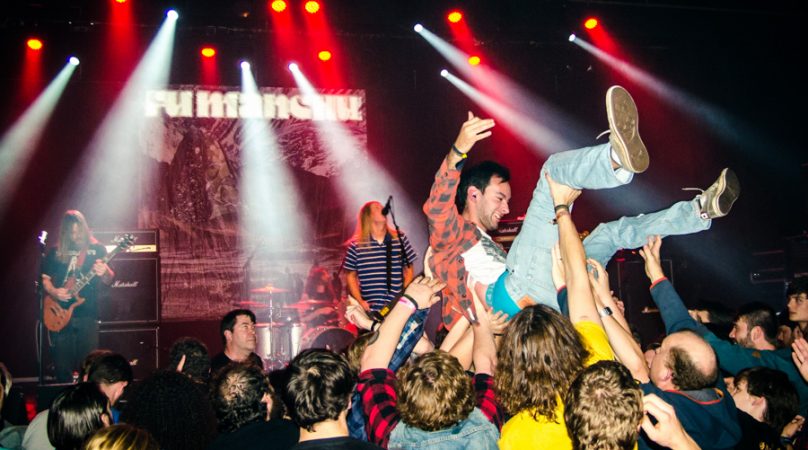 After a quite dark, dirty and stormy Saturday, this last day at DESERTFEST BELGIUM 2014 dragged us into the wilderness of Stoner Rock, in the purest sense of the term. The Desertfest brand took on its full meaning thanks to the legendary FU MANCHU and BRANT BJORK, while heavily qualified bands like COLOUR HAZE, BLACK BOMBAIM or BLACK MOTH gave e-ve-ry-thing in order to catapult our cosmic brains to outer space. To sum it all up: heavy trips, moshing, beer moshing. Rather honest deal, isn’t it? (Photos by Sylvain Golvet)

For once that I have a good excuse – other than a variable state of tipsiness – for missing one or two shows while attending a festival, I had to share it with you guys. So, what could be more exciting than seeing bands I’ve barely heard of? I’m gonna tell you: supervising a filmed interview at Scandic Hotel’s hot and wet swimming pool. Right. Bragging aside, this is the reason why Sylvain and I turned up quite late at Trix, but soon enough not to miss 1000MODS. On the small Vulture Stage, the Greek deliver their utterly passionate stoner rock tunes, with dynamics that have nothing to envy the mighty Red Fang. It took the festival-goers two days to get het up (the venue’s tasteless Pils beer might have something to do with that…), but now they’re all in and headbanging, five inches away from an overjoyed band. Now that was a four stars warm-up if I ever saw one! 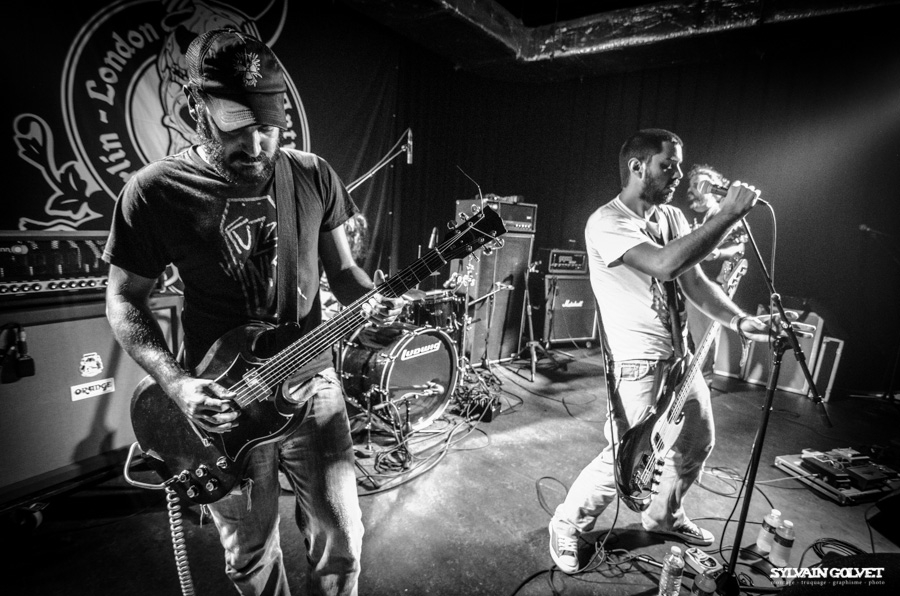 As much as I’d like to stay until the end of the gig, my desire to see Portugal’s finest space rockers BLACK BOMBAIM again is stronger. The Canyon audience is still a bit scarce, perfect to sneak to the front. The band seems to be a total discovery for many people here, and I see on some faces that the odyssey is a bit hard to get into for a few others. Whereas Black Bombaim’s music always conveys a very spontaneous feeling, the songs are generally based on a similar structure: a really tight rhythm section creates a hypnotic thread on which the guitar can wander freely, weaving its cosmic web in the wind. Like Colour Haze in their very own way, Black Bombaim have this little something that makes them stand out, a subtly exotic touch somewhere between jazz, afrobeat and Berber music. Minds are expanding, eyes get closed, and bodies start swaying instinctively… We’re not at a rock concert anymore, nor at Desertfest, we’re letting it all go: we are travelling. The band plays “Africa II” and “Arabia” (off their new record “Far Out”, reviewed here) as one magical piece of music… Show-wise, there’s nothing much happening on stage, the three musicians being totally concentrated on their playing, yet the result is still brilliant. These past forty minutes just felt as rapid as an hypnosis session, but it doesn’t prevent us from cheering them warmly at the end of the gig! As good live as on record, Black Bombaim are definitely to be counted among the corner stones of contemporary space rock. 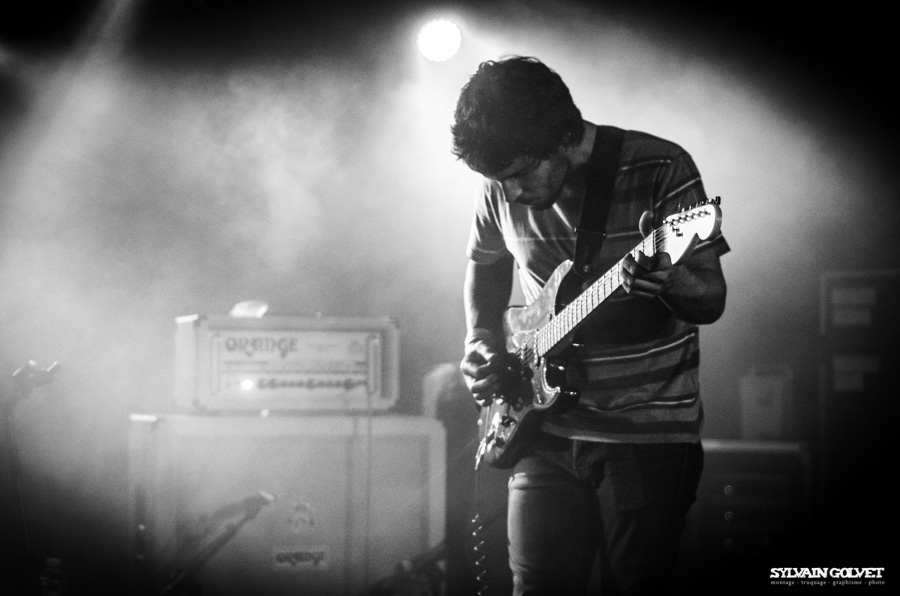 Getting back to a normal state of awareness is a bit hard after this breach in the space-time continuum. Anywaaayyy, Brutus are about to be on downstairs! Eeeerr, wait… When did they recruit a female vocalist? I get quickly informed that they are “Brutus from Belgium”. Okay. I hear cheeseburgers calling from the Food Market anyway. Next show on the list is COLOUR HAZE on the Desert Stage. What can I say that hasn’t already been said about these pioneers of German stoner rock? Thanks to the room’s great acoustics, the cosmic experience quickly turns into absolute rapture. As if this band, their aquatic riffs, chilled out atmospheres and velvet vocals, had for only purpose to spoil our ears and makes us utterly happy. And it’s working. In the dark, hearts are getting overwhelmed with joy, while irises are captivated by the hypnotic screenings in the background. “She Said”, “Love”, the classic “Tempel” or the funkier “Moon”: the German offer us a perfect best-of setlist, and most of all, a moment out of time – on cloud nine. Far from all the revival posers, Colour Haze are the standard-bearers of the most genuine modern hippie spirit. Simply wonderful. 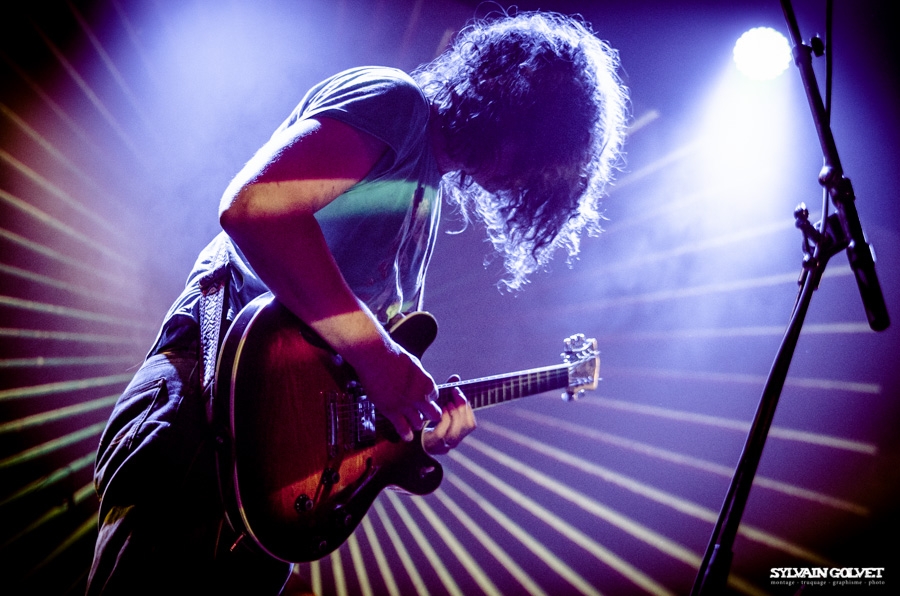 The mood changes radically with BLACK MOTH on the Vulture Stage! There was no way I would miss this promising outfit from Leeds – whom I discovered at Desertfest London 2013 – especially as their new album “Condemned To Hope” is just too cool to be ignored by any rock and metal lover. Black Moth are among the youngest bands of the whole lineup, yet once they take the stage, the display of energy is immediate and fearsome. From catchy grungy anthems to doom rock tunes which, for that matter, always sound super fun to listen to – how in hell do they do that? – the band delivers one very enthusiastic and refreshing performance from beginning to end. As my friend Patrick B. says: “they are as good as the vocalist is charming”. Indeed, while our four lads are busy building a massive wall of sound, headbanging like crazy, the lovely Harriet Bevan bewitches her audience, in all simplicity. The band seems chuffed to be here, a feeling which is undeniably shared by the audience. Well done, Black Moth! 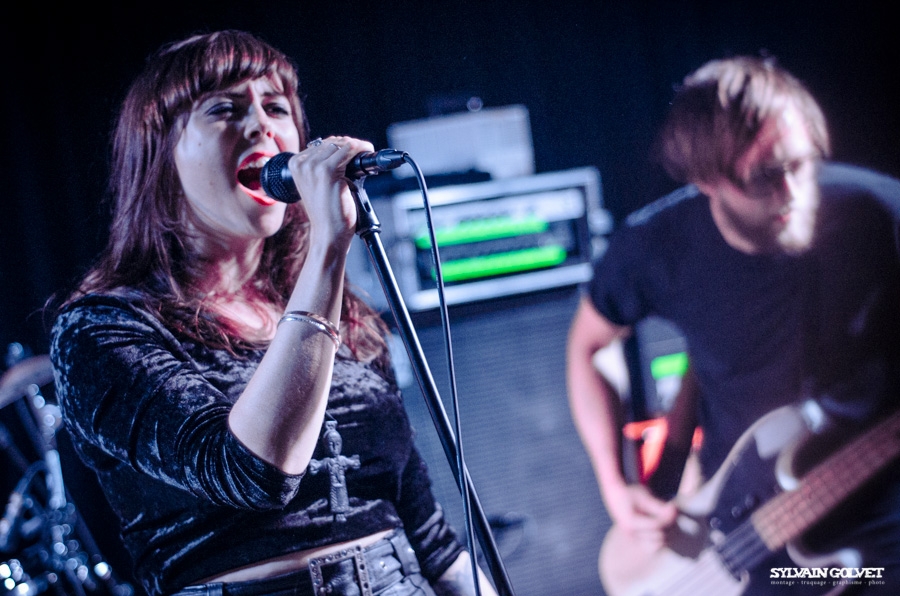 After a quick white wine break that my poor palate is already regretting – really, the booze supply in this venue won’t remain as a highlight of the festival –  it’s time to witness the coming of a messiah, a man who has won general support through the ages of desert rock: Mister BRANT BJORK. This ultimate night at Desertfest Belgium will end into a sandstorm of riffage or won’t be at all, like the grand finale of heavy rock it is expected to be. The prophecy occurs when “Low Desert Punk” starts to echo in the venue… (Just so you know, everything you’ll be reading from now on is the outcome of totally blurry and exhilarated memories). Damn, that groove is HUGE. It took the attendees three days to get properly amped up, but we’re all together now, enthralled by the good vibes. My poor worn out brain keeps sending me weird signals on repeat like thatstoofackinkeewwwl. With their usual smoothness, Hippie Brant and his bros serve us the best of the best, on a golden platter, from “Jalamanta” to “Saved By Magic”, “Somera Sol”, and even a couple of tracks off his new album “Black Power Flower”. You can be nothing but amazed by the perfect balance these guys keep, between the constant jam feel and their absolute mastery of the elements. Brant Bjork And The Low Desert Punk Band = major class act, period. 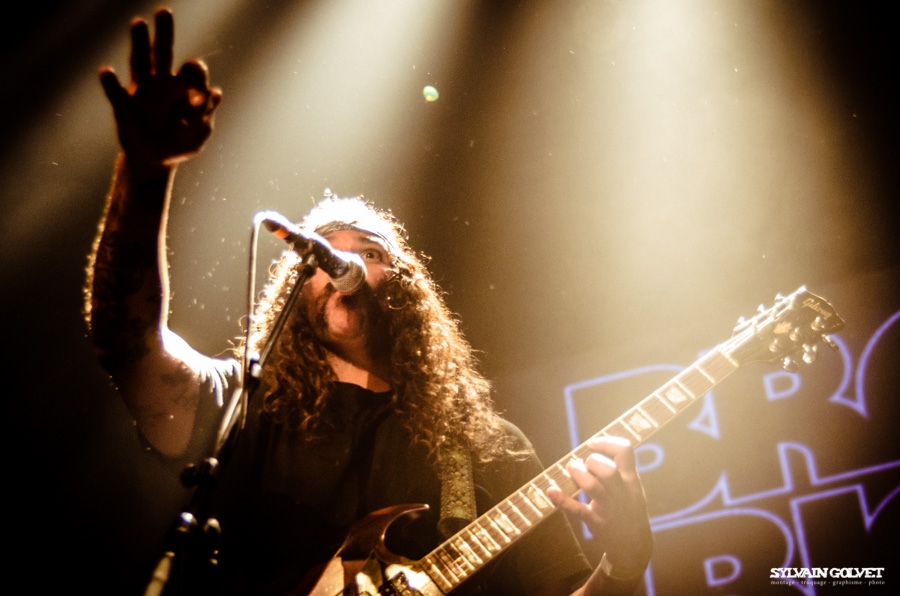 At last. After three days of an intense rock, doom and psych mass, here they come, the true headliners of this festival: FU MANCHU. Getting off to a roaring start on “Eatin Dust” and “Hell On Wheels”, the Californian set the vibe straight up and moshers are unleashed. Enjoying the gig with a part of the Black Moth crew, it takes me only a few minutes to get overwhelmed by the encompassing sonic power. Unlike Brant Bjork who was kinda at cruising speed, now is the time to release maximum horsepower. Eardrums are being burned like rubber on hot tarmac or a Brit’s skin under the Death Valley sun, with Fu Manchu covering a wide part of their discography, fuzzy bulldozer style. And when Bob Balch gives us a hint of the “Evil Eye” intro while tuning his guitar, I literally leap of excitement, which leads my ass to joyfully meet the floor. No fucks given, we’re all here to get wild, something our stage heroes seem to have plainly understood. It’s hard to believe that these guys have been around for almost twenty-five years now, as their straight-from-the-bowl punks on-stage presence is tremendously kicking our asses right now. It is WAR on a soaked playground, my friends. So when I was taking about a riff sandstorm a bit earlier on, that was an obvious understatement. In the memory of a Desertfester, no other band than Fu Manchu could have wrapped up this festival THAT brilliantly – allow me to exclude Kyuss from the equation here. 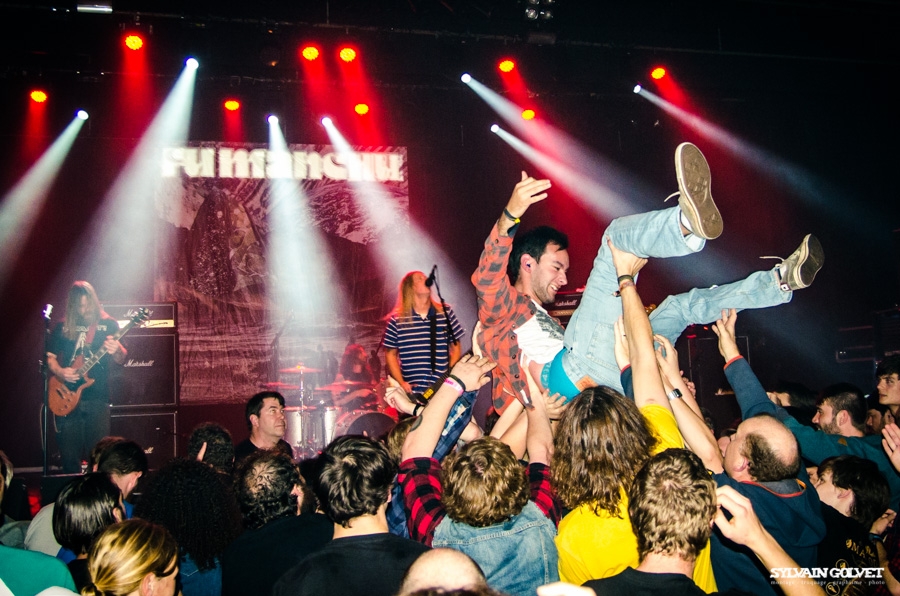 After this memorable sonic smack, the traditional Desertfest afterparty is the time to cut loose one last time before everyone goes back to their dull routine. Some sip chilli mojitos in the Trix gardens, others choose to headbang on the heaviest rock tunes upstairs. Loads more Pils is being poured into our throats (and on the floor), until it’s 3am and security decides to turn on the lights, treating us to some Bob Marley as a farewell soundtrack – because we’re all stoners in the end, right? Most of us will keep the party going at Scandic hotel until dawn, but don’t worry: not a single animal or human will be harmed during the process (not even the hotel’s staff)…

This first edition of DESERTFEST BELGIUM was a total success, as much on a lineup level as on a very well-thought on-site organisation (needless to get out of the venue as all commodities were available inside). One of the other strong points of the festival was the sound quality on the three stages, which did justice to even the heavier bands. So yeah, that Desertfest weekend in Antwerp went nothing but smoothly as you can see, and we’re now looking forward to the first announcement to 2015…

READ REPORT OF DAY 1 AND DAY 2