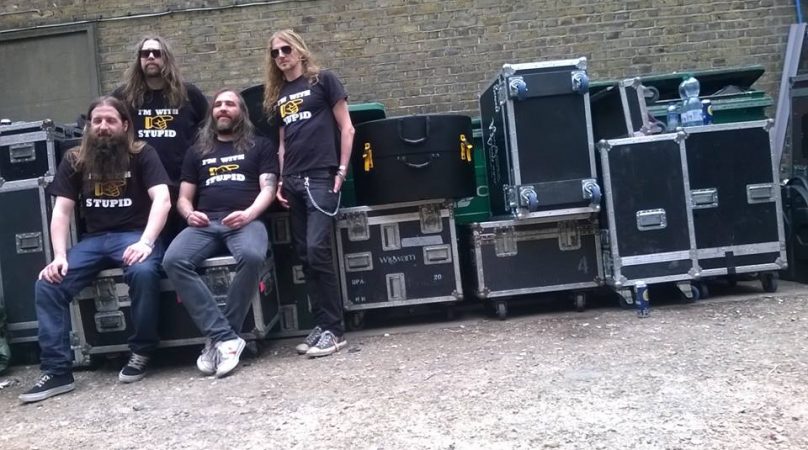 “You see, in this world there’s two kinds of people, my friend: those with loaded guns, and those who dig“. Oslo’s badass rockers LONELY KAMEL definitely carry the loaded guns. Like highwaymen hailing from the North, these four blues gentlemen won’t however do no harm to you. Actually, they’d rather pour some Bourbon down your throat and treat your ears to a pure blast of “heavy, bluesy, moisty, groovy” rock, as they like to define it. With three amazing – and equally good – albums in store, LONELY KAMEL own a very unique formula made of gruff yet very soulful vocals, big fucking mountains of catchy riffs and übersexy grooves, dragging us from dark and rowdy moods to way more boozed-up and all-fun atmospheres. Basically, they are of these bands that put a spell on every single person who has the chance to attend their shows, getting you totally addicted. However, LONELY KAMEL haven’t entered any pact with the devil, and they also don’t have a big marketing machine behind them: they just do what they do best, letting the lifeblood of rock’n’roll flowing into each one of their songs. Unsurprisingly, their performance at last Desertfest London appeared to be one of the highlights of the festival for many people. Between two gigs, I had the chance to meet with the boys, preferring a casual – and a bit silly – smalltalk to the usual promo Q&A. And as I expected, the four Norwegians were as cool in person as they are on-stage… Proof below. (Photos: all rights reserved)

This will be my only promo-related question for this interview, so… when will you release a new record?

Thomas Brenna (guitar & vocals): At the end of August this year. We’ve been working on new songs for a pretty long time now!

What can we expect for this new Lonely Kamel album?

Lukas Paulsen (guitar & backing vocals): It’ll be crappy as hell. (laughs)
TB: We’re gonna try to make it as crappy and cheap as possible. We’re gonna spend a little time in the studio this time. We’re just going to record the bass and songs live, and use more time on the details for this album.

TB: Yeah, we’ll do a part of the UK, Scandinavia, and Europe from September 12th to October 5th or something.

Speaking of touring, what is the song that would represent your life on the road… the most?

LP: “Turn The Page”, the Bob Seger one with saxophone.
TB: The Proclaimers “500 Miles”. (he starts singing) “When I wake up, yeah I know I’m gonna be, I’m gonna be the man who wakes up next to you“…
LP: Bob Seger is actually Stian’s favorite song, mine is “Wanted Dead Or Alive”. (laughs) What would be the thing you really couldn’t do without, while on tour?

(Desertfest’s photographer John White suddenly shows up, looking for the band Black Rainbows. Humorously, the Lonely Kamel dudes kindly invites him to “shut the fuck up and stay”.)

What’s the weirdest thing that happened to you since you formed the band?

TB: Yeah, in Erfurt. My bag was gone, and my girlfriend had this call from the German police that they had found my bag up in a tree somewhere, with my passport and everything. That’s kind of special, right? How bizarre, how bizarre… But you know, a lot of tour stories sound really boring when explained all over again. But these are the small things that are funny on tour.

Now here’s a personal one. What do you do for a living, outside of Lonely Kamel?

The coolest spot you played?

TB: Sardinia for Duna Jam. If you’ve never been there, you should go.
LP: Greece was pretty nice, we played two gigs last year in Athens and Thessaloniki. People there rented an RV for us, it was stacked with beer, drinks and weed. We stayed a couple of days there, it was really really nice!

You already played France, didn’t you?

LP: First time was at Glazart, not that cool, but the second one was totally crazy.

It might be at Stoned Gatherings, they have the best crowd in whole Paris.

This is the one I’m talking about!

TB: Yeah, it was a sauna. Really really hot gig.

What are the records you’ve been digging lately?

LP: “Free” is the one I listen to everyday in the car.
TB: We like our Norwegian friends, actually. Årabrot, Kvelertak (then starts a pronunciation lesson, with everyone giving their own version of the way we say “Kuh-ve-luh-tak” in Norwegian)… A record I really love is “Blues Funeral” by Mark Lanegan. I recommend everyone to check him out, and he’s just as good live.

Now I’ll leave you with the weirdest question. If you had to be a movie character, who would you be?

TB: Big Lebowski. That’s Stian in that show actually.
SH: Alf, the friendly alien. (laughs)
LP: I’d be Gandalf. Or Rust from True Detective. Or Jesus in Big Lebowski.
TB: “Don’t fuck with the Jesus”! I’d like to be Stan Marsh from South Park, because I wish Randy Marsh was my father… (laughs) Sorry, we played with Weedeater yesterday.

The last word is all yours, guys.

LP: (with a creepy voice) Watch out for Lonely Kameeeeel…
TB: We’re gonna be much more on the road from now on, so you’re gonna see more of us. And we’ve made a lot of songs, so hopefully it won’t be that long before we release the next one.

FIND LONELY KAMEL ON FACEBOOK
AND CATCH THEM ON THEIR EURO TOUR THIS FALL!