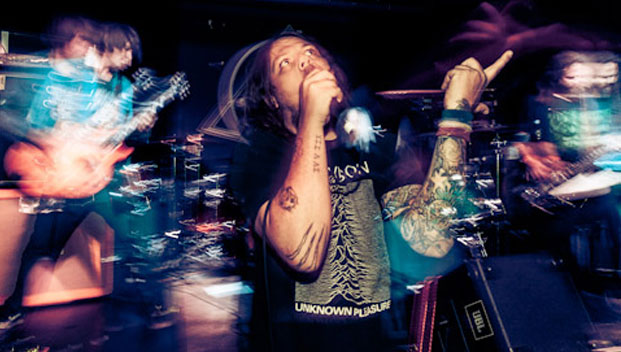 London promoters When Planets Collide and Human Disease Promo were invited to curate their own stage at DESERTFEST LONDON 2014, filling the Underworld basement with more darkness and THC than it can actually contain… As a headliner of this 100% doom and sludge announcement, southern sludge godfathers SOURVEIN will make their great comeback on the European soil. Filthy.

There are those bands that create a swamp of dirge so thick that you feel the possibility there may actually be no escape or mental resolve before the final end-time. Sourvein are not just one of those bands, they are the goddam masters! Oozing a southern drawl and nomadic mysticism that invokes images in the mind of horror and fright, and that uncertain feeling of teetering on the very edge of sanity. It’s akin to full engulfment in a THC cloud from the opening bars right through a distorted mire of torment, and whisky fueled loathing, to the bitter lasting feedback of the destructive climax. Basically Sourvein don’t fuck around, they do away with the pleasantries and get straight to the fucking point. Following from the past appearances and incantations of the band at The Underworld on the “No Sleep Til Halloween” tour of 2006 (alongside fellow DesertFest favourites Church Of Misery), and again in 2008 with Orange Goblin, we are proud to once again welcome back T-Roy and his current outfit of NoCal’s finest filthmonger’s to this fair city of ours.

Sweden’s driving wall of darkened heaviness Kongh have been taking sludge and doomed post-metal to the next level for the best part of a decade now, destroying stages and minds worldwide with their own unfrogiving barrage of dynamic noise. Epic and monstrous guitar work layered up with pounding drums and vocals varying from trad-doom warbling to soaring harmonised melodys to crushing death-sludge roars and blackened rasps, all of this gelling together into a head-banging, brain-devouring force, it’s easy to forget sometimes that this huge sound is coming from only 3 members. Kongh have been busy since they last hit these shores with YOB / Dark Castle in Oct 2011. As well as the album, a slew of European dates and a recent outing supporting heavyweights Meshuggah across Scandinavia have landed the band in a place ready to destroy the senses of all who can squeeze into the Underworld to catch them. Get ready to work those necks, throw claws, pound fists, and yet still be taken to a place far outside of this reality in the same process… Kongh are hitting DesertFest to liquidise your friggin’ minds!

With relatively little in the way of released material Graves At Sea built up a slew of interest due to the sheer grief / woe ridden intensity of the sound that they spewed forth. 2 tracks on a split with Asunder in 2005 showed the band to also possess a quality of strong dynamic ability, although it is the sheer overall nastiness of the bands squalid down-tuned sound that make their status as one of the most sought after underground dark sludge offerings fully justified. Few bands could hope to possess such varying and well laid down exorcisms (at times reminiscent of the vocal stylings of the likes of Corrupted, Burning Witch, Noothgrush, and occasionally even through to Autopsy / Abscess), draped over smoke enriched fuzzed licks and long low bass rumbles. Get ready for a slow twisting vortex of ravenous filth throughout!

Huge waves of riff repetition of early releases earned the originally London based two-piece a reputation for a one-of-kind uncompromising volume experience with their live shows across the UK and Europe over the course of the last 7 years, plus a short stint on the US north west coast. A more recent move to a rural base has given rise to the massive 60/70’s influenced opus of 2013’s “Maleficia Lamiah”, the opening title track of which is currently being streamed for free on their own Black Axis Records website. With artwork by Vic Singh (also responsible for Pink Floyd’s Piper At The Gates Of Dawn cover art) Pombagira have conjured up a unique journey of modern doom-psych fusion, and this latest offering has yet to be experienced in a live setting in the capital… Until now! Expect their full backline of vintage hardware to drive home the heavy tide of a new found acid-doom drenched sound over the audience in a thick veil of hypnotic low end magnificence.

Whether it’s the bloody history of Northern Italy’s past, or possibly the isolation of their hometown region? It’s left to be guessed, but Grime produce a sound that is most certainly dragged from the depths of despair, suffering and antipathy, crawling with venomous snarls and screeching, this is dark and heavy music at it’s best! That is not to say however that 2013’s crushing (Billy Anderson mixed) LP “Deteriorate” is lacking in soul. Far from it. In fact the band’s second offering is rich in warm tone and offers finely crafted riffmanship within interspersed chunks of head nodding weedy vibes. The overall feel of this band is a slow, brooding type of heavy that has initiated the band into doom / sludge circles with an instantly high regard. A European tour last year with Cough and shows with Steven O’Malley, Ufomammut and a Russian stint with Suma have cemented the trio as being a strongly anticipated soundtrack to a slice of post-smoke negativity when they make their UK debut on the Human Disease Promo / WPC stage at DesertFest in April next year.

Coming in somewhere between Sick Of It All and the mighty Down, these Welsh masters of the raging riff are to due to set off the Huma Disease / WPC stage at this year’s Desertfest. Having played triumphant sets at the likes of Hammerfest and Bloodstock (appearing not once but twice, playing to a strong crowd on their second stage in 2013), the band have also played storming shows supporting many fellow “Lifer’s” like Viking Skull and Orange Goblin. Their debut Album ‘Curse them Out’ was released to rave reviews and with 2014 seeing them disappear back in to the studio once again we hope that this year’s appearance at DesertFest may be a good chance for them to air some brand new material too. These boys are coming from the valleys to crush your tiny minds. Do not miss out!