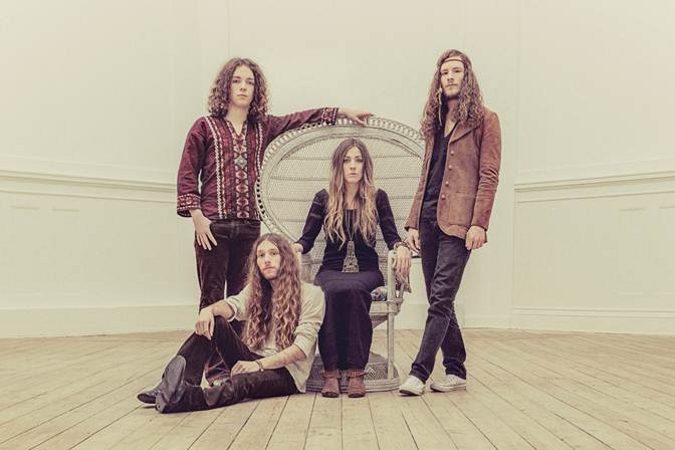 After the super heavy Quietus announcement a few weeks back, and the great surprise of Spirit Caravn’s return after a ten years hiatus, the DESERTFEST LONDON gives it all for the blues rock and vintage stuff lovers, with no less than five bands of sheer quality. On April 25 to 27th, Camden is going to groove with Blues Pills, Samsara Blues Experiment, Zodiac, The Midnight Ghost Train et Sixty Watt Shaman. Boom!

Elin Larsson, Cory Berry, Zack Anderson and Dorian Sorriaux come from three different sections of the globe: Sweden, America and France, and were drawn together over shared talent and the magic that comes along with playing the blues from the heart. With Elin’s voice sounding like an even more powerful Grace Slick, Stevie Nicks and Janis Joplin combined mixed with warm, retro tones and knock-you-on-your-back guitar solos, Blues Pills’ new EP ‘Devil Man’ sounds akin to an amped-up Jimi Hendrix or Cream. You could even say it’s what Graveyard might sound like if they had a pair of ear-blasting female lungs at the helm. Either way, this is exactly what we need in order to keep resurrecting the heart of rock ‘n’ roll; which is, after all, what DesertFest is all about. (Text courtesy of The Desertfest website)

For the last five years, Samsara Blues Experiment have been one of the most consistently exciting bands in the stoner rock scene, introducing themselves to the world with 2010’s sublime – and perfectly titled – “Long-Distance Trip”; a hypnotic, brooding, jamming collision of sound which struck every right note with those yearning for quality European psych. Quick on its heels was the more straightforward, but no less immense, “Revelation & Mystery”, which didn’t forego the jammy feel of their debut, but certainly brought the driven riffs forward a row or two. Last month they released that tricky (make that trippy!) third album, the momentous “Waiting for the Flood” (reviewed here). Resetting the balance yet again and placing their free-flowing psych back at the forefront, “Waiting for the Flood” is a space-bound fifty minutes of drifting trance-inducing joy. (Text courtesy of The Desertfest website)

With Zodiac’s unique brand of southern-rock tinged heavy blues, their new album “A Hiding Place” might as well be the sequel to Thin Lizzy’s “Jailbreak”. Ultimately their sound is happy, it’s hedonistic and, most of all, it’s timeless. Additionally, the band knows when to take it down a notch – in a similar way to how Graveyard bring even the heaviest of the heavies down into their slower numbers with ease. And it’s not just all riffs and bassy growls, Zodiac even throw in the occasional piano ballad like ‘Leave Me Blind’, which is again a completely timeless, classic thing to do. The band’s American southern rock guitar tone, style and lyrics make it almost undetectable that they’re German. Zodiac exploded out of Münster in 2011 and have been prolifically recording and touring ever since. (Text courtesy of The Desertfest website)

A thousand raging bulls are about to trample over Camden streets! The ground will be crumbling down under the Midnight Ghost Train’s furious riffs. Their new EP « Buffalo » is as greasy and heavy as it is bluesy and fucking rock’n’roll. Needless to add these dudes from Kansas have done a great job touring across Europe this fall (we saw them at Glad Stone Fest et au Up In Smoke Fest). On stage, the southern rock outlet delivers 300% energy in order to unleash the masses into a massive rock party. This contagious feeling becomes addictive, and we’ll be glad to be touched by their rock’n’roll grace again this April!

SWS started in 1996 in Maryland, quickly becoming an established name in underground rock but live have remained a growing concern since their third and final 2002 album with occasional appearances like their storming show at Maryland’s Stoner Hands of Doom X festival in 2009. The Shaman’s sound is characterised by soulful grooves, husky vocals and whiskey-drenched attitude, born from the collective experience of guys who know a thing or two about life and have put that wisdom into the form of swaggering riffs and swinging rhythm. Over the years they’ve toured the US with Nebula, Spirit Caravan, Black Label Society, Crowbar, Clutch, Corrosion Of Conformity, Alabama Thunderpussy and toured Europe with Karma To Burn. At DesertFest 2014 they will be delivering the goods with a set of well-proven classics, along with some new surprises to celebrate this seasoned outfit’s new burst of life. (Text courtesy of The Desertfest website)