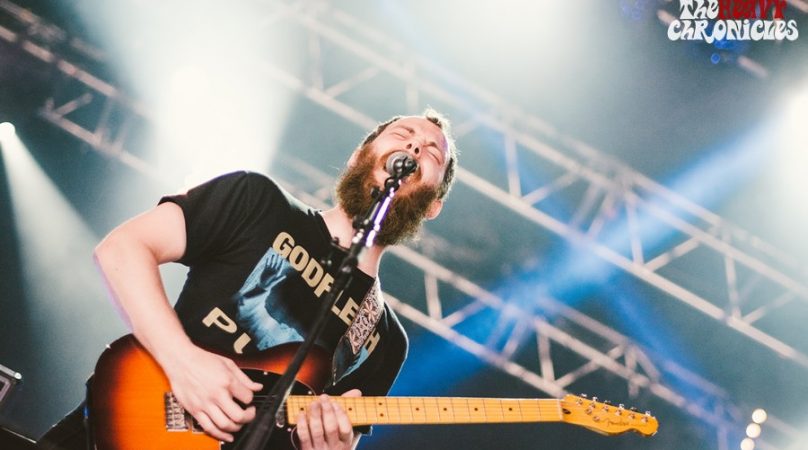 Arkansas based doom band PALLBEARER was definitely one of my greatest finds of 2012. Their first album entitled “Sorrow and Extinction” (released on Devouter Records) happens to be an unsuspected masterpiece of heavy music that merges the intrinsic heaviness of classic doom with incredibly emotional riffage and vocals. What’s more, their gig at Hellfest 2013 in France was one of the most brilliant performances of the whole weekend, so you can easily understand why I HAD to catch the band for an interview. So this is me, randomly meeting vocalist and lead guitarist Brett Campbell and guitarist Devin Holt for a quick laid-back debriefing at Hellfest’s verdant gardens. One shot.

To be honest, I tried to find some infos about you guys on the Internet, but except the biography on your Facebook page, I didn’t find much. So now, I want to know everything about Pallbearer. 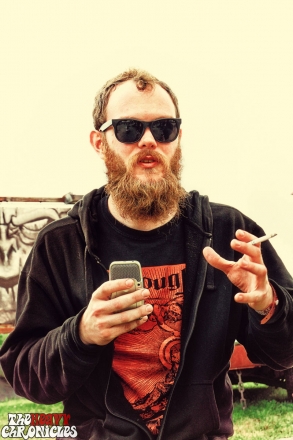 Devin (guitar) : Joe and Brett formed the band in 2008 and I joined shortly afterwards, then we went through several drummers, until we found Mark.
Brett (lead guitar & vocals) : Joe and I first started with a band called “Sports”, it was kind of a psychedelic drone impro stuff, but we wanted to add some more structure to the music and we were going through dark times. So it was a good cathartic way to deal with stuff, it was fun to experiment different kinds of music. We’ve always been into doom, Little Rock (editor’s note : Little Rock, Arkansas, their hometown) has a really good doom scene with Rwake and bands like that, so it felt natural to do what we like. “The Legend” was the first song that we completed, the next one just came to us, we just figured out how we sounded I guess. It came really natural after that.

Devin : We’re hoping to record, early next year. We’re actually about to take some time off and do just a couple of local things and write the new record. We’ve got a big jump on, we have a couple of songs in the works.
Brett : We have an incredibly huge backlog of riffs that we just have to piece together and arrange. We’re going to record a song for a split with a band called Uzala, probably in fall, and start recording the new album in January or February.

We’ve always been into doom, Little Rock has a really good scene so it felt natural to do what we like. 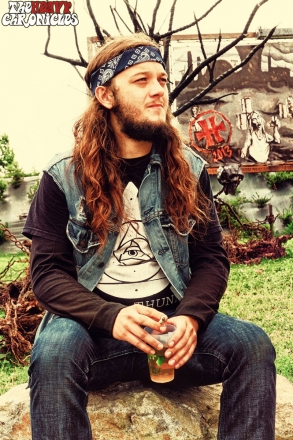 Actually, I discovered Pallbearer through one of the SCION A/V compilations (available here), with the “Devoid Of Redemption” song. How did you end up on such a compilation ?

Brett : They had a Profound Lore showcase in Pomona, California. We were selected from the roster to play, so they flew us out there, we played that fest, they recorded it professionally and put it out. Later on, they pressed that track on vinyl and gave us a bunch of them to just give away, which I thought was really cool.

I guess until now, most of your fans were based in the U.S, but as you played Roadburn and Hellfest this year, it probably helped to create a fanbase in Europe. Sincerely, the gig you played yesterday was so intense it almost brought me to tears !

Brett : (laughs) I’ve seen people crying in the crowd before, it’s always kind of… I guess it’s cool.
Devin : People always just close their eyes and space out…
Brett : At first, no one was really moving or anything, and I figured out later that it’s a good thing. Because we’re not really a mosh sort of band, we’re all stoners except for Joe. It’s music to let wash over you, it doesn’t really punch you in the face.

We’re not really a mosh sort of band, we’re all stoners except for Joe. Pallbearer is music to let wash over you, it doesn’t really punch you in the face.

Yeah, and that’s pretty characteristic of many gigs at the Valley, people are more contemplating than moshing or anything…

Brett : I think we had our first crowdsurfer yesterday.
Devin : That guy was incredible ! He screamed for ten minutes after the set, while we were getting our pedals together. That guy earned a free shirt for screaming for ten minutes (laughs).

Do you have more tour plans after you’re done recording the new record in 2014 ?

Brett : We were gonna try to tour around Roadburn, but our booking agent was kind of a “scheisster”. He was trying to fucking give us a shaft.
Devin : They were two of us, they were fighting against each other, calling Joe and talking shit on each other.
Brett : …Instead of finding gigs ! We’ve got a couple more of better contacts now, so we’ll try to get over here as soon as possible. A lot of our influences are European anyway, I feel like our style is a little more European than it’s American. 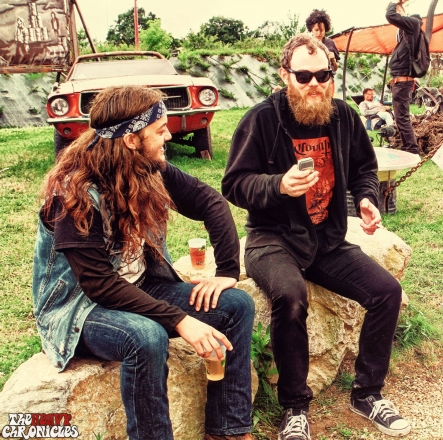 I feel like our style is a little more European than it’s American.

Speaking of which, what are the records or artists you’ve listened to recently ?

Both : Pinkish Black form Forthworth, Texas.
Brett : Beneath Oblivion from Cincinnati, they’re like funeral sludge. It’s really dark and awesome. Before The Iowa from Columbus, Ohio. It’s instrumental psychedelic, kind of like Yob-ish, they’re really good.
Devin :  Dead Bird. Chuck Schaaf, our old drummer who recorded their album, he’s the main songwriter in that band, he plays guitar and does the vocals for them.
Brett : People call it sludge I guess, but it’s really heavy soulful doom. What else ? I mostly listen to stuff from the 70’s.

The last word is all yours.