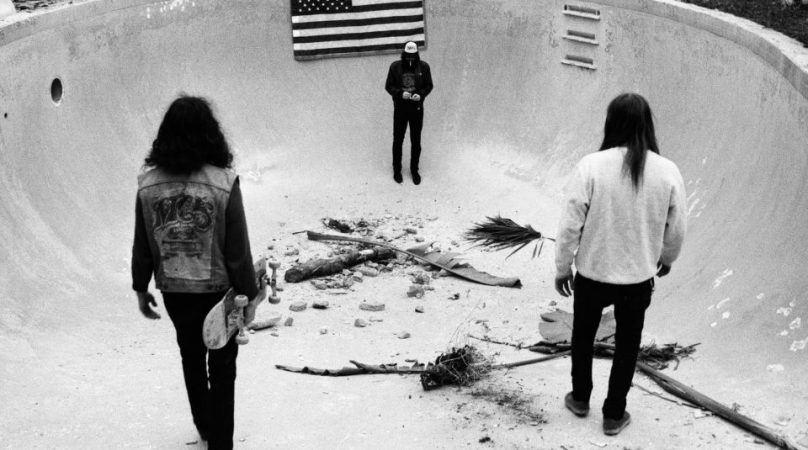 Meeting THE SHRINE was one thing I really was looking forward to doing at London Desertfest 2013, this band being the rawest rock’n’roll act, smack in the middle of a profusion of stoner and very heavy bands. Although 60’s and 70’s hard rock revival has been the main thing these past few years, the Venice Beach trio is not exactly playing in the same league. Self-proclaimed “psychedelic violence rock and roll”, THE SHRINE are clearly within their right. But let me set the background for you. Close your eyes and picture L.A circa 1976 : a gathering of mental skaters at the Dog Bowl in Venice, weed smell, beer bottles everywhere, it’s fucking hot and some loud punk rock is cranking from someone’s car stereo in the distance… Now imagine all these kids the first time they heard Black Sabbath and Black Flag. Best inspiration, best background ever. The motto? LOUDER. Even the most insane rock band out here isn’t as insane as THE SHRINE on stage, without overstating things. So as freestyle as life can get, our interview didn’t exactly take place as expected. When we met up down the overcrowded street of the Black Heart in Camden after their Desertfest performance, the boys were exhausted, Josh was in a wheelchair, and some random drunk dude called Barry decided to disturb the smooth progress of the interview… Originally, I had like hundreds of questions to ask, but all those ideas went hazy and my brain got turned off. So I did it the freestyle way. That’s the spirit, anyway! (Photos : The Shrine)

First of all, how are you guys?

When did you arrive in Europe exactly?

Josh Landau (guitar & vocals): We’ve been here in the great European continent for four days, and on the second day I hurt my foot skateboarding. I’ve been in a wheelchair for two days… (but Josh rocked the show despite his injury)

You just played the last gig at the Black Heart for this year’s Desertfest, but did you manage to see a few performances anyway?

JL: We saw Cough yesterday and they were fucking awesome.
Court Murphy (bass): Good to see Castle because we missed them…
Jeff Murray (drums): Yeah, they were really good!
JL: Seeing Pentagram was fucking awesome, I’ve seen them a bunch of times and they’re always great. It’s funny because it’s “Desertfest”, which is like some sort of European fantasy about the Californian desert. But really, there’s nothing there ! It’s like if we were having a “Eurofest” in Venice Beach or something… (laughs) It’s interesting, this concept about the 90’s stoner rock scene, where there was really nobody there… But we had the coolest show ever!

I think they want to infuse this festival with a friendly atmosphere, while putting the finest bands together on the lineup, so that European people can have a fucking great time for three days.

JL: But if they wanted it to be a real “desert fest”, there probably should be a lot more meth.

(This is where our mate Barry imposes himself in the discussion, he obviously wanted to get that wheelchair from Josh and give him rollerskates instead) So… If you had to make your own Desertfest in California, how would you proceed?

JL: We had an awesome time here at Desertfest, but if we did something home, it would probably be our own fest.
Barry: …It’d be called “Barry Fest”! (laughs)
JL: Yeah, we’d have Barry on lead ukulele…
Barry: We’d do Barry’s BBQ, we’d do BBQ chicken, everything ! If you’re a vegeterian, we’d do bloody Barry’s Veggie Whoop…
JL: We stand behind everything Barry has said. (laughs) “If they wanted it to be a real “desert fest”, there probably should be a lot more meth.”

Are you guys into stoner rock in general or not at all?

JM: We saw Black Flag live in Redondo Beach, at the first place we ever played. And listening to that was cool, it was like they played all their early stuff. And Keith Morris sang “My War”, so…
JL: Yeah it was awesome, there are some awesome bands in America that we’re friends with, like Dirty Fences in Brooklyn, or Hot Lunch in San Francisco. They’re insane, like insane 60’s-70’s fuzzed out rock, those are our brothers.
CM: We just toured with Graveyard recently…
JL: The inside of their tour bus is one of the best things I’ve seen in my life. Spoiled rotten! 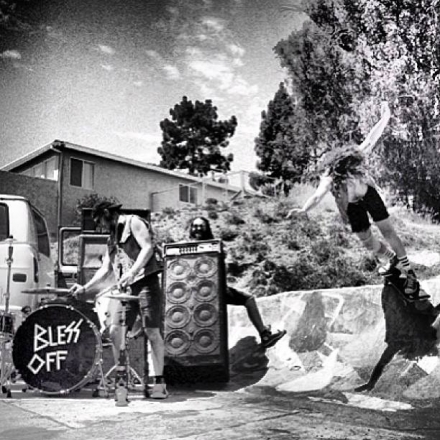 “We went to Holland and recorded tons of songs there. We’re figuring out releasing those basement-dungeon-masterpieces for the next album.”

What about the projects you’re having at the moment? You released “Primitive Blast” on Tee Pee Records last year…

JL: Last time we came to Europe, we were opening up for Fu Manchu. We went to Holland after the tour and we recorded tons of songs there. We were up all night for five nights in a row, just recording, banging it out at the end of the tour… And then we went home and we just got some of these recordings back recently, and we’re figuring out releasing those. For the next album.

After tonight, you’ll be touring Europe for a few weeks. What are the countries or cities you’re looking forward to going the most?

JM: We’re going to Russia this time, in Moscow and Saint Petersburg.
JL: Yeah, we’re kinda scared…
CM: And also going to Greece for the first time ! We’re looking forward to that, really!

CM: Me too! I’ve heard nothing but good things about it. (Once in Greece, the band who wanted to take a quick bath in the Mediterranean Sea was stopped and questioned by the local police… because of their long hair and “suspect clothing”)
JL: But tonight was fucking awesome, we had no idea and that was one of the coolest shows we’ve ever played.

Last question. If a promoter was offering you the chance to play on the same stage with a few bands of your choice, who would you pick?

JM: Thin Lizzy, Bill Hicks.
JL: Coltrane.
CM: Rush, ZZ Top…
Barry: (all of us forgot he was there) And you know what, we’re going to Russia together and I’m gonna play drums !
CM: …And Barry! (laughs)
All together: And Bill Cosby!!!

Dig THE SHRINE even more: take a look at their FACEBOOK PAGE