Since their beginnings, they’ve had the support of Kurt Ballou (Converge), so KVELERTAK returned quite naturally in his studios to record the successor of thee amazing, thee great, thee brutaaaaaal “Kvelertak”. It seems as if leaving their cold hometown Stavanger to sunbathe in Massachusetts didn’t tarnish their rock fury. “Meir” is here, it’s loud, frantic and EPIC. “KVE-LER-TAAAAAK” !!! 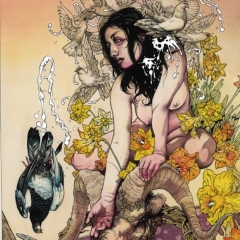 Two years ago, when I reviewed KVELERTAK’s first eponymous record, I said it was “like blending all the bulls’ balls in the world with a freaking dose of endorphin”. This metaphor was as subtle and precise than this record was violent and festive. With its combination of  punk rock and heavy/black metal filled with war chants and Scandinavian folklore, “Kvelertak” set the bar quite fucking high. As if this band took its energy and charisma from the Nordic gods, something badly powerful, something you can’t resist. We were all kicked in the arse so hard that obviously, everyone had high expectations concerning “Meir”. And yet, regarding Kvelertak there’s no point anticipating : you just have to dig it.

The first thing you notice when playing the intro song “Åpenbaring” is its pure stadium atmosphere. Even though you go through a lot of blast beats and furious riffs all along the record, it has that undeniable red-blooded and festive spirit à la Turbonegro. “Meir” is  “more”, in that the band has pushed the envelope in a good way. If you thought you would “only” get a fix of brutal music, then you were utterly wrong. Each song is a proof of the band’s maturing in songwriting, in that they had great fun shaking up tempos and atmospheres, delivering epic rock bridges with 3 guitars (“Tordenbrak”) or unexpected heart-rending breaks (“Bruane Brenn”). And when a very Oriental solo takes place in the middle of all that punk hardcore frenzy (“Snilespik”), it’s nothing but pure GENIUS. Whether detractors like it or not, Kurt Ballou is the only one who can capture the spirit of Kvelertak and bring out their work with such a spectacular accuracy.

Not only Erlend Hjelvik’s singing technique has developed, but the whole band also takes part in the choruses, bridges and what not. Everyone is shouting, it’s a fucking happy mess, it’s a fucking huge party. “Meir” feels like the reunion of Black Flag, Nirvana, AC/DC and Entombed in the same room with loads of booze, drugs and good vibes. The house is just about to explode. The more you’ll listen to this record, the more you’ll love its classic riffs, its unpredictable highlights and its positive vibrations. It’s no wonder that the boys chose to end “Meir” on the vibrant egotrippy song “Kvelertak”…