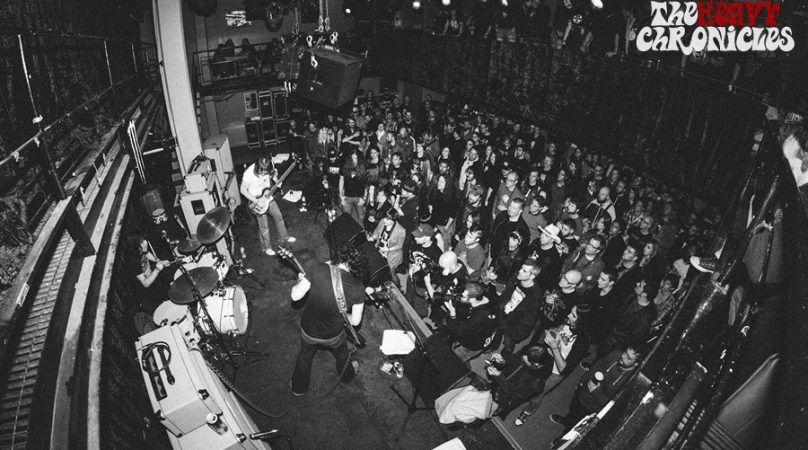 It has never felt so hard to get back to a normal life than after DESERTFEST London. During three days, the stoner, doom and heavy rock community took over Camden Town, the most exciting area of London, to celebrate music, life, fun. Our own private paradise ? The Underworld, Black Heart, Electric Ballroom and Jazz Café. Four clubs, dozens of bands each day, “la crème de la crème”, the coolest atmosphere in the whole world. I will provide you a daily report of this 2013 edition, which was one of the best music weekends of all times. No one would ever contradict this statement… Until next year. Let’s then start with the first day and the performances of BLACK MOTH, MARS RED SKY, ADMIRAL SIR CLOUDLESLEY SHOVEL, YAWNING MAN, HEXVESSEL and KADAVAR. (Photos : Gael Mathieu)

FRIDAY APRIL 26, 2013. It’s been 15 years I haven’t set foot in London, but this year, there’s no way I would miss Desertfest. I booked everything and got all set up very early this time, so here we are : first day of the festival, 12 P.M, Camden Town, The World’s End pub. Who would have thought we would quickly stumble upon Bruno Fevery from Kyuss, who came for the weekend to see his friends in Unida ? That’s the Desertfest : each street corner can bring you cool surprises, like meeting some amazing musicians and bands or making great friends. Once we have located the venues and have the wristbands around our wrists, we’re ready. Ready to enter the darkness of The Underwooooorld…

It’s funny because I feel like I’ve known Black Moth for a long time, whereas I’ve never ever heard a single note of their music. You gotta have guts to open this festival, which they have for sure. As for us, we have our ears cleaned and a bit of indulgence ready for these newcomers from Leeds. As I’m writing these words, I can barely remember the exact sound of their music, because something stood out from the rest in my mind : vocalist Harriet Bevan. Her jet-black hair, her mischievous smile and presence on stage. That’s what I remember the most. That, and Black Moth’s heaviness. I felt this appetizer so refreshing that I totally forgot to turn on the analytical part of my brain. But the crowd sounded content, so yeah, it was pretty cool. 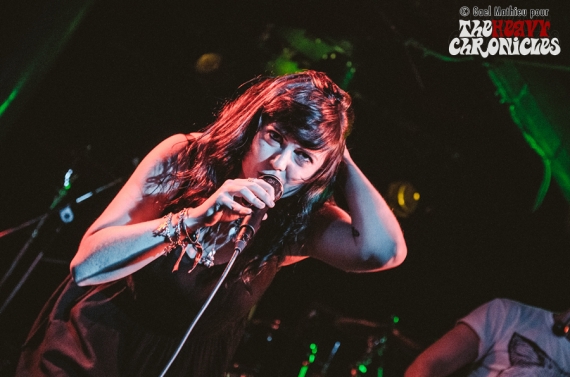 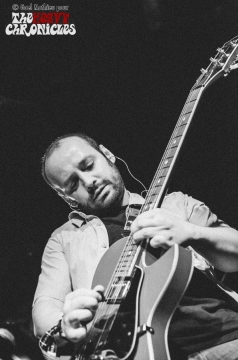 Still at The Underworld, there would be no reason for me to miss the performance of my fellows Mars Red Sky. Please note that this year’s Desertfest brought out a cool bunch of French bands : Mars Red Sky, Glowsun and Abrahma. Among the French stoner rock community, these guys are some kind of “national pride”, being featured at the coolest festivals and doing justice to the “good side” of frenchy music. Their 45 minutes setlist is the typical festival one, with mostly classics from their first record and catchy tracks from the latest EP “Be My Guide”. The band benefits a hell of a powerful sound in the venue, and I also notice many smiles between them, which is a good sign. The only negative point of this performance is the weakness of Julien Pras’ vocals (I’m standing right next to the voice PA, which is not the wisest idea in the world). The voice effect that is used to give this trippy feeling is missing, which makes his singing sound very abrupt. However, his guitar solos are enthralling, so it’s a blessing in disguise. It looks like there are many fans in The Underworld, because when the first notes of  “Strong Reflection” echo, you can hear the “aaaaaahhhh !” and “yeaaaahhh !” everywhere. As far as I’m concerned, I had a preference for the song with both Julien and Jimmy singing, and I think they should definitely work this feature out in the future. Thumbs up to my buddies for this cool show ! 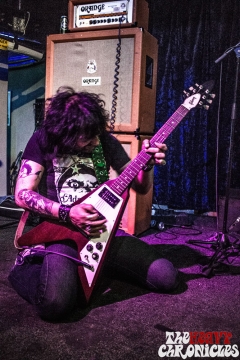 I’ve heard so much about this band since I arrived in London, that I had to miss Yawning Sons and walk straight to Jazz Café on the other side of the street to discover this eighth wonder of the world signed on Rise Above Record. When I get in the venue, they’ve already started. With such a name, you can only expect something extravagant, but the reality actually goes beyond all expectations. On stage, I can see three rock veterans who look like they were just teleported from the NWOBHM era. Their 70’s heavy metal sounds fantastic, and the message is nothing but clear : ok we’re 50, but we still got that fucking energy… Newcomers can still try to stop us ! With the singer’s sharp Flying V riffs (who kind of makes me think of Tony Iommi, just saying), and the audacious groove of both the bass player and the drummer, The Admiral Sir Cloudesley Shovell delivers a super fun yet visceral performance, a time travel to the origins of heavy metal, a genuine testimony. A more impish version of Status Quo and Motörhead. Cool discovery !

My cell phone vibrates in my pocket, it’s my fellow photographer : “Yawning Man has started”. It’s time to leave the Jazz Café and run to the Underworld to listen to the legendary trio from Palm Springs. Once arrived there, I can’t even reach the stage, the venue’s packed as hell. Being 5’2 tall, I won’t see anything anyway so I ensconce myself in a sofa near the bar to write some stuff… while enjoying the band’s trippy desert rock effusions. Everyone looks awestruck, something fantastic is going on here, no doubt. Yawning Man plays a hedonistic rock, some stoner music for the salvations of all souls. I can’t see anything of the show, but I can’t help being dragged into a beautiful trip in the desert, telling myself I’d like to stay in this state for the rest of my life… Which I obviously can’t, given that I have to run back to Jazz Café to get a good spot front row for Kadavar. That was my main issue today : Fatso Jetson, Kadavar or Steak ? I’m too addicted to this band to think properly, so my choice is made. 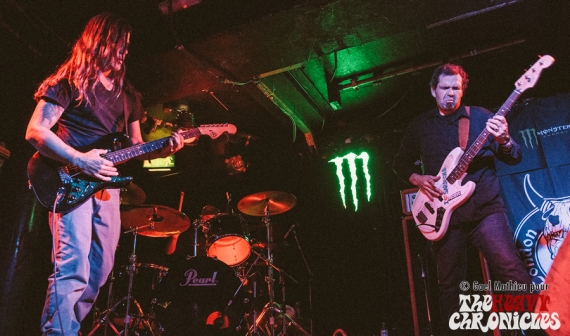 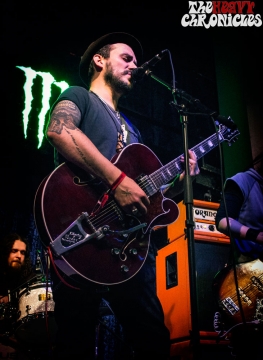 I get there so quickly, that another mysterious band is still playing. Hexvessel… There’s an out of time atmosphere, their music is very much different from what I’ve been listening to all day. I’m half mesmerized by the singer/guitarist Mat McNerney, half fascinated by the peaceful expression on each musician’s face. Something funny about this band is that, when people asked me about it, words were missing so I was like “it sounds like mystic chants over forest music”. They define their sound as “psychedelic forest folk”, and probably use a little bit of white magic to make all these people dance around like they’re possessed. However, the mood is set. Each musician seems stuck in his own world, yet they all look very connected to each other, all taken away by the words of their magnetic frontman. I’m quietly observing this beautiful music ritual, watching them playing guitar, bass, cello, synths… That’s for sure some one of a kind music experience, and you should check them out to understand what I’m talking about. 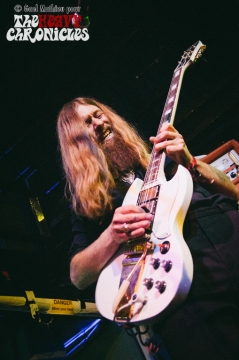 German trio Kadavar arrives super late at Jazz Café, so they rush towards the stage to do their line check. The show starts 10-15 minutes late, but who cares ? It’s even more intense ! For the fans’ delight, the guys let themselves go and play as many songs from the new record “Abra Kadavar” than hit songs from the first one. They’re way more on fire and confident than the last time I saw them (@ Stone Rising Fest in Lyon) and impose their new songs with so much conviction that… everyone gets into it in a blink of an eye. As usual, Tiger is a real beast on drums and you can tell by the smile on his face that the show is going exactly how he wanted it to go. Wolf can’t stop hammering his beautiful white Gibson SG Custom, screaming his lungs out, headbanging as if it was his last day on Earth. As for their slender new bass player, he clearly got his bearings and delivers a much wilder performance than the last time I saw him. The more we get into the show, the crazier the pit gets… When Kadavar starts the ultimate song of the night (“Goddess Of Dawn” I think), one of the Desertfest’s promoters pops from nowhere and starts addressing big signs to Tiger to make them stop. I’m pretty sure Tiger noticed him but he keeps acting like he didn’t. The man stays behind Tiger for a while and keeps insisting, but they keep playing even louder. Kadavar won’t stop until they’re done, that’s all. We all can’t help laughing while enjoying the last few minutes of this great moment of heavy rock. The show is over, the band leaves the stage to thunderous applauses. This, ladies and gentlemen, was the biggest and ballsiest lesson of rock’n’roll served by the Germans.

We don’t have time to attend the end of Steak’s show at the Black Heart, given that we have to take a few pictures of Kadavar in the darkest streets of Camden. However, we’ll end at the black Heart anyway because the after party is happening there. Despite a consequent tiredness and back pain, we need to go and release the pressure big time. Upstairs, the classic metal set by the MetalHammer DJ, downstairs, the killer stoner DJ set by Kipp from Steak and another cool DJ. It’s a no brainer. 2 AM, the after party ends, time to go to bed, time for hangover. See what’s next with the full report of the second day of DESERTFEST 2013…

REPORT OF DAY 2 AND DAY 3 OF DESERTFEST 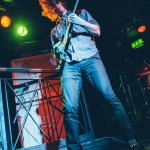 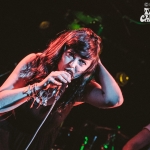 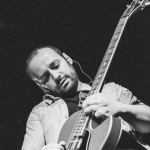 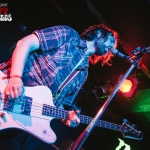 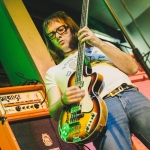 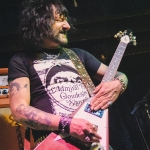 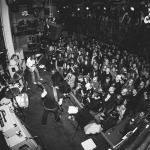 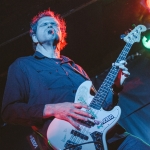 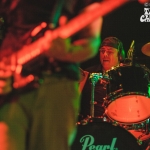 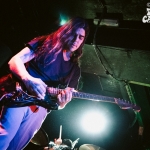 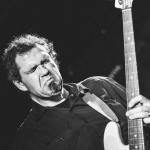 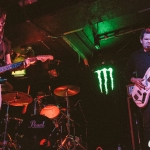 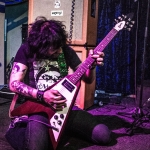 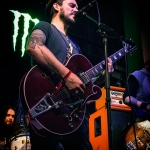 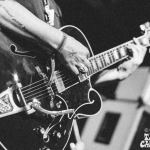 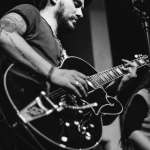 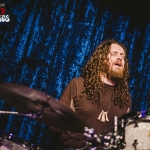 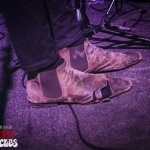 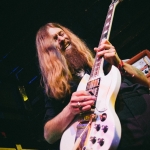 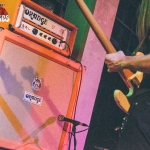 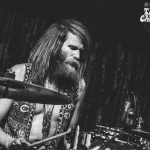