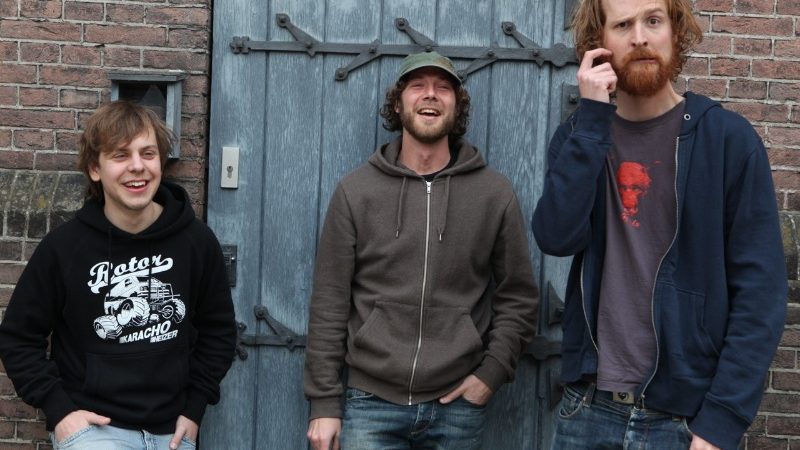 Listening to SUNGRAZER is like touching paradise with the tips of your fingers, feeling the warmth of the sun after a never-ending winter, breathing the seaside salty wind with your eyes closed. Never in your life you would have such sensations while listening to a rock song. Sungrazer’s music is as heavy as it’s dreamy, and as winding as it’s incredibly catchy, however they don’t like to define themselves as a stoner band. Formed in Maastricht in 2009, Sungrazer hasn’t even reached 10 years of existence, yet you can feel since their beginnings the perfect harmony between the three musicians. As if they were born to create something together, something great obviously.
Two mesmerizing records “Sungrazer” and “Mirador” (released on Elektrohasch Records) later, the Dutch trio has earned the respect they deserved amongst the heavy rock scene, blowing minds with their rare but striking performances. The recent release of their brilliant split EP with The Machine finally brought back the band on our lands for a bunch of gigs, which gave me the opportunity to look deeper into Sungrazer. Don’t expect great theories or promo speeches, just three natural men sharing their thoughts on various music topics… (Photos : all rights reserved)

A few days ago you started a non-stop tour in Europe to promote your recent split EP with The Machine. So how has it go so far ?

Hans (drums) : Pretty good. Yesterday in Paris was just nuts, the audience went crazy with big moshpits and stuff.
Rutger (guitar/vocals) : Remember Paris from last year ? Yesterday was even hotter, like “wow, what is happening now?”. There was a guy in front of the fan, he was in some kind of trip while people were crowdsurfing around. I’ve never seen that before to any of our gigs ! Only in Paris !
Sander (bass/vocals) : All the shows went really cool, many people every day, but yeah, yesterday was really crazy indeed. It’s a real challenge to make a moshpit on our music, you need to be creative. There were a lot of creative people in the room yesterday… (laughs)

Yes, Paris has a strong stoner community which is known for being a very cheerful crowd. So do you have any expectations on this tour ? Some specific towns you’re looking forward to going ?

H : I’m looking forward to all the gigs, because every day is different. But yeah, Spain and Portugal for the weather.
S : It’s very different to play in Spain or Portugal than in Germany. We have many stories from those countries, you know… (laughs) It’s an adventure there ! You never know what you’ll get in the south, because you don’t know the venues and the people who organize.
H : But we met really cool people there, and also some people with guns in Portugal…

H : We thought we wouldn’t leave Portugal alive, so… (laughs) Strikes and gutters ! It was just bad luck. Now let’s talk about the EP you recorded with The Machine. How the idea of such a collaboration came up ?

H : When we started with Sungrazer, we played a small club in Maastricht and invited them for the evening. We really liked them. The idea of a split record came up but years passed. The time was right.
S : We are good friends, and also musically. They sound different from us, but I can’t think of another band who would fit. They’re a bit like us, we’re a bit like them, we’re both on Elektrohasch (the music label founded by Colour Haze’s frontman Stefan Koglek), we have the same roots…
H : …We both like bowling, and we have the same humor.

How did you and The Machine proceed during these studio sessions with David Eering (The Machine’s lead guitarist and also sound engineer) ? At some point, did you influence each other on the creative process ?

S : No, because we worked the songs on our own. David recorded everything, so of course he had some ideas about the recording process. That was a collaboration, but not really in the songwriting. We didn’t jam together, for example.
H : But he did an important thing, because our pedals broke at some point and he had to push the buttons for us on the choruses. But now it’s getting pretty technical. (laughs)
R : We should have filmed that !

So how would you describe these three new songs compared with the rest of your work ?

S : First song “Dopo” is a song we’ve played for a longer time, and it fits more into the older stuff. I think the two other songs have more new influences, they feel different from the first and second record.
R : We recorded a few jams and listened back, there were a lot of ideas so we started to write new songs. It’s a really logical process coming from the work on “Mirador” and then it becomes the next step.
H : But it’s pretty hard to compare songs with each other.

I think your music definitely belongs to what I like to call “the holy kingdom of fuzz and heavy”… (laughs) But you also have this very dreamy and mellow side in your music, which makes you very unique. I feel a lot of 60’s pop slipped into it, especially with the vocals. Would you claim having these influences ?

R : We’re all huge fans of The Beatles and Neil Young. We have so many influences, but make sure it’s The Beatles, Nirvana, Kyuss… We all like dynamics, whether they’re really hard or soft. So you can choose fuzz to create a better dynamic, in combination with bass and drums.
S : You got it right. And if you look at us like a stoner band, then you can feel the difference from a regular stoner band. Yes, we have many pop, indie, 60’s, 70’s influences. It always depends on how you look at the band or what label is on the band. I think we started out with stoner rock because we didn’t want to do the rock’n’roll thing anymore. But actually, we don’t like the “stoner” label anymore, it doesn’t really suit.
H : On the other hand, being part of that scene is very cool.

Are you planning to record a new album ?

Here’s a tricky question. In my opinion, many great stoner bands come from northern Europe. It’s quite paradoxal in some way, so how do you think these bands from the cold lands manage to create such a warm, round and sunburned sound ?

R : They want sun, so they create their own sun and play it !
S : Dutch people and Swedish people smoke a lot of grass (laughs). But what you said is true, I guess I can’t explain it. It’s hard to explain a scene, it’s just there. In Holland, we’re the only two bands who play this type of music. But I’m not really aware of all the things happening in the stoner rock scene, because I listen to many other stuff you know…
H : On the other hand, we like to go to the beach on holidays, go surfing… But it has nothing to do with Holland ! (laughs)

Bonus one. If a tour promoter was giving you the chance to share the lineup with any band, dead or alive, which bands would you pick ?

(moment of intense excitement and reflexion)
R : Of course The Beatles.
S : Let’s put all the bands we like in there ! It would be a lineup with 20 bands…
H : The Beatles, Motorpsycho, young Neil Young, Autolux, Yo La Tengo (unanimously approved) and… Sleep.
S : But as as an opener, of course ! (laughs)