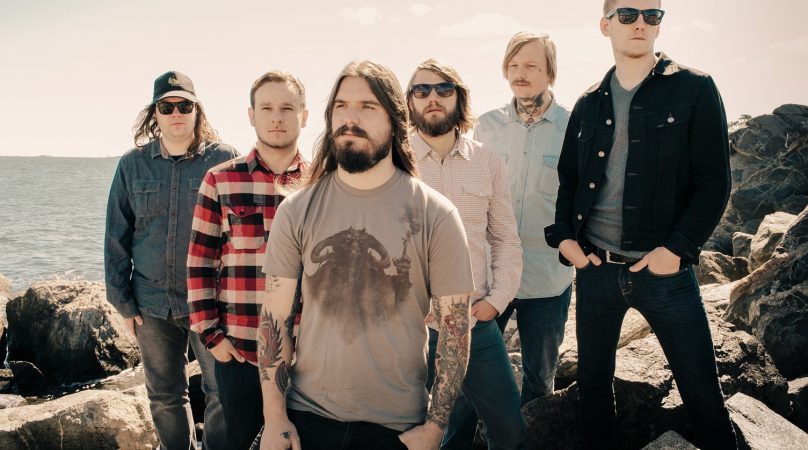 KVELERTAK have enjoyed quite a success since their beginnings in 2010. First of all, their eponymous debut (produced by studio don and Converge guitarist Kurt Ballou) blown in like a fresh North Wind, so brutal and cheerful that it put everyone in this community on the same wavelength. “Kvelertak” was good that it was awarded with a Gold Record in Norway, handed by Dave Grohl in person. Since then, the Norwegian have had a fulfilling career, marked out with a bunch of successful international tours with Converge, Torche or Mastodon. That must look good on the CV, right ? Heavy powerhouse label Roadrunner Records noticed it, and signed the band’s second album “Meir” earlier this year. A few days before its release, I had once again the chance to interview the band. Oh, I would have loved talking to the whole crew, but I had to share with a bunch of medias who came to meet the scene’s “new bankable act”. The Heavy Chronicles can boast about being one of the first blogs who’s been supporting the band from their debut (and we will, until death). Kickass guitarist Maciek Ofstad nicely complied to the task, being light years away from the image of merciless Scandinavian warriors they convey in their music. Another reason to dig these guys.

How has been the tour so far ?

Maciek : It’s been really good ! We just finished touring UK, it’s been really awesome. By far some of the best shows we played in a while so it was cool.

For the first record, the lyrics were mostly about Norwegian folklore and legends. Can we expect something different on “Meir” ?

As far as you’re concerned as a musician, what is your source of inspiration when you write riffs for Kvelertak ?

Everything is inspiration. I don’t know how to translate things of life into music, inspiration just comes. But there are so many different people in the band, so with the music I like and the music they like, we draw a lot of inspiration from everywhere.

When it comes to your creative process within the band, do you write music from Erlend’s lyrics, or does he write his lyrics after the riffs are done ?

No, he writes after everything’s done. Bjarte writes most of the songs. He makes shitty demos then takes them to the rehearsal room, we learn the songs then everyone add their ideas. Then you have the final product. Compared with the first album, “Meir” was very much written in the rehearsal space. We took the songs there and spent four months practicing every day and figuring stuff out. The process has been more of a team work. At Godcity Studios for the recording of “Meir” (Photo : Kvelertak Facebook)

Yeah I know, it’s like that rule that if you make a great first album, the second one is shitty (laughs). Of course when we made the first album, we didn’t expect anyone to hear it, we did it for us. Now we have a lot of people’s attention, they’re waiting to hear what we do, that’s the difference. At the end of the day, I feel like Kvelertak will always be a part of us, nothing has changed. It’s just cool that people expect something of us now. I expect us to be better as well. Actually I think that it’s… ace. (grins) I’m very happy about it.

Kurt Ballou produced both albums, which, from a technical point of view, is a real quality guarantee. But I’m very curious : how did you meet him in the first place ?

It was pretty funny actually. In 2009, we wanted to record an album but we were wondering who could produce it. We sat down and wrote a list, and everyone wrote Kurt’s name because at that time, we were all listening to a lot of bands that he was recording. We sent him an email “hey, Kvelertak form Norway, we want to record our album with you, is that cool ?” and sent a demo to him. We thought he would never answer, but we had an email back from him “fuck yes, let’s do this”. And that was it ! Fuck yeah, we were going to the States !

Wow, talking about being lucky…

Yeah ! He told us that he gets tons of requests every week that he often doesn’t even check. But he checked ours because there was a weird name on it (laughs). Like “what the fuck is this ? Oh, awesome !”. (laughs)

Speaking of Kurt, you toured the U.S with Converge this fall, but you also toured Asia, Europe… How do the different crowd react to your music ?

The same ! Everyone goes crazy, everywhere is good… It’s always crazy to see that, because we’re just a band from Norway. But going to Australia, or Salt Lake City and see all these people going crazy… It makes me think there is still hope for the music and… oui. (laughs)

What are the best memories you’ve had from touring ?

Everything ! Whenever I get that question, there’s like a thousand things that come to mind. But meeting great people is one of them, we got inspired by tons of bands we toured with. We met the Crown Prince of Norway, he was at the show when we were warming up for Foo Fighters. This summer, we will warm up for Kiss, you know, it’s CRAZY. In four years, I’ve accomplished more of my life goals than I did through my whole life. Let’s talk about the video for “Bruane Brenn”. It’s not something common to have kids in metal videos. Who had the idea ? How did you cast the kids ?

Yeah there was a casting and all… The original idea was kids playing guitar, driving cars and drinking beers… Just being wild. So we talked to Stian Kristiansen who did the video, he’s involved in this children theatre in Stavanger so he knows a lot of kids. My concern was that the kids wouldn’t be holding back, but as soon as they sent us the first rough cuts, I saw this kid with the microphone going crazy… so good. I thought it turned out really good ! I don’t think people were expecting that at all, which is a cool thing !

Yeah, they were probably expecting you playing live… But definitely not kids !

Yeah, that’s what it makes it more original.

So like you said, you went to meet a lot of heavy bands while touring : Converge, Torche, Truckfighters… Is there a specific scene in rock or metal to which you relate more than another ?

I feel like I relate to everything. We’re kind of lucky in the way that we fit in anywhere. I don’t know if it’s an overstatement but we could actually tour with everyone ! As long as it’s a cool band with cool people, that’s what matters.

A huge tour is coming with a lots of gigs all over the world… Which gigs are looking forward to ?

Oh that’s a good one ! When will it happen ?

We’re going to be home from April 13 to April 20th. Switch off my phone and hang with my girlfriend, that’s what I’m looking forward to do. That, and going to Australia. I love touring Europe, but it’s too fucking cold right now. Festivals season is always cool you know, it’s two months of partying and meeting tons of bands. We’ve done it three times now, and it’s always a good time. There are a lot of festivals that I’m excited to play…

Last question but not the least, it’s a fun one you’ll see… If a tour promoter was giving you the chance to share the lineup with a few bands you like, which can include sharing the stage… Who would you pick, dead or alive ?

(surprised) Ooooooh nooooo ! (grins) I’d like to jam with Sebastian Bach, that would probably be really fucking cool ! He would teach me some arpegios at the organ… Or Mozart, he’s a fucking weirdo. Have you seen the movie ? He never developed one side of his brain because his dad pushed him to play piano and violin since the age of 2, he wrote his first symphony at 6, that’s just insane. He developed the adult side of the brain, but never developed the child side. So he went from sophisticated to zero years old. Yeah, so I’d like to jam with Mozart.

Get KVELERTAK tour dates and exciting news on their Facebook.