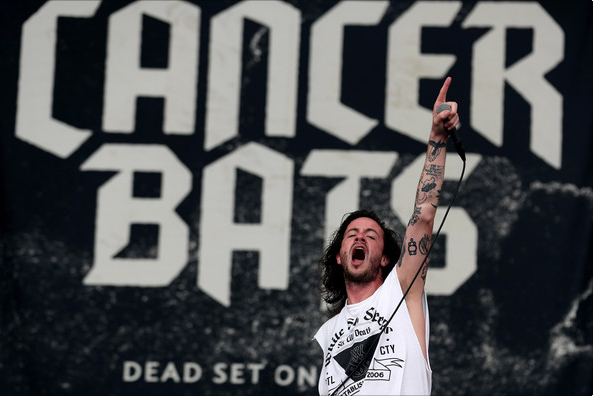 From a strictly metal point of view, one could define CANCER BATS as a hardcore band. From a punk point of view, one would say CANCER BATS play fucking headbanger metal. Formed in 2004 in the land of possibilities that is Toronto, the Canadian band has always had a foot in each camp, and contrary to the whole something-core or post-stuff posers, they’ve always genuinely belonged to both worlds. With their groovy blend of kicking hardcore spirit and greasy but melodic heaviness, driven by the unstoppable power of their singer Liam Cormier, CANCER BATS also has nothing to prove on stage. They’ve been supporting their album “Dead Set On Living” all over the world for almost a year now, so when it’ll be over, they’ll definitely deserve a timeout before even starting thinking of a new record. Considering the laid-back and sometimes wacky attitude they showcase in their videos, I couldn’t just run a classic interview with this band. I wanted to bring something refreshing, far from the boring promotional duty : asking silly questions.
So I met LIAM CORMIER before their soundcheck at Le Krakatoa (Bordeaux, France) and discovered a forthcoming guy, who is also very humble and down to earth. A real pleasure to meet the guy behind the mic, who entrusted worthwhile answers to my fifteen questions…

Why is your last album so good that people would crave to have it ?

I think we just looked up what we really like about our band. So instead of trying to get to what we should do – because sometimes you can get caught up when it becomes your job – we just made it completely fun. Just play and write songs that we wanted to play. And people seemed to really respond to that, so I think that’s our new plan ! (laughs)

This one comes from a fan on the Internet : why Cancer Bats ? Why not Parkinson Buffalo ?

I like that ! Me and my friends all joked about different combinations of diseases and animals, so I definitely went through a bunch of them to figure it out. But I like Cancer Bats because it’s easy and it sticks in your brain.

I don’t know, we have so many different kinds of songs, like “Hail Destroyer”, “Bricks & Mortar”, or “Sleep This Away” that’s truly heavy, or really thrash songs like “Pray For Darkness”… Because we’re kind of all over the place when it comes to writing, just because the music we like to listen to is all over the place.

Pick one song that would represent the most your life on tour.

There’s this Tom Petty song our old sound guy used to check the PA with, “Saving Grace” from “Highway Companion”. That’s definitely a good tour song, and we would listen to it every day. It was awesome because it sums up what tour is like, because someone like Tom Petty has been on tour for so long, he has lived it for so long… It’s a really good song, it’s got a good groove. Something you wouldn’t do without on the road ?

Hmmm, I’m gonna say coffee. The other thing may be my cell phone but that’s cheesy. I miss my girlfriend I like to call her… I remember when we first started touring, our cell phones wouldn’t work in Europe and it made things difficult, we had to go find Internet cafés and stuff… In 2009, we were able to bring our cell phones, so we definitely did it for a while ! (laughs)

I’d like to tour with Clutch, they’re one of our favorite bands, for Mike (Peters, drummer) and I. We’d all love to play with Entombed. I’d love to tour with Converge, you know it’s definitely a big inspiration for us in terms of how to run your band. The kind of music that they put out is awesome.

What’s the weirdest thing a fan ever told you ?

Hmm ! Weird I don’t know, but there is definitely funny stuff. One of them is that a lot of our band members look like other people, I think because they’ve got big beards. I don’t get it as much as Scott (Middleton, Cancer Bats guitar player), he gets compared to people, like weird actors. (laughs) Or people will always be like “my friend looks like your guitar player” and there would be some total metalhead dude with a beard, so I always get a kick out of that, I think it’s really funny.

Three cool memories as a member of Cancer Bats ?

One thing that I’ll never forget is the first time we went to Australia in 2007, it blew our mind to be so away from home, and that someone actually had the idea to bring us there. Like “why ?”. And when we showed up there was kids who knew our band, singing along and having fun. It was really crazy ! Our first time in Greece when everyone went crazy is like one of my favorite shows of the whole tour. The other thing that’s cool is when you first start up like a supporting band and then go and headline the same venues we’ve been to. It’s nice though because it keeps things on perspective !

What’s your favorite spot in the whole world ?

Barcelona is one of my favorite cities, we have so many friends there, I love going to Barcelona and I even went on vacations with my girlfriend. Copenhagen in Denmark is also a city where we have lots of friends, I like the culture, just everything there about is kind of what I’m about. These cities are way more chilled-out, people still work hard and do everything, but they’re not in a rush.

What’s the most played song or album on your mp3 at the moment ?

Ooh… I’ve been listening to the new Twin Shadow a lot, it’s total electro-clash but it’s so good, really 80’s kinda like, I’ve been jamming that super hard. On a hardcore side of things… (an idea comes to his mind) Oh, I’ve also listened to the new Santigold !

Not at all, but when you live in a hardcore band and play metal shows every day… When I was at home last week, I listened a lot to the new Santigold and the new Graveyard. We’ve also been jamming a lot on the new Cult Of Luna record. Because we’re in France today, we listened to the new Gojira, it’s fucking awesome ! There are so many good records, like The Hives, Gallows, Turbonegro… In hip-hop, the new Danny Brown is so good, I really like A$AP Rocky, and even older stuff like Wiz Khalifa and Lil Wayne’s “Carter III”. What’s the best advice you would give to someone who wants to hangout with Cancer Bats ?

Just to be chilled, we’re pretty easy to get along with. For any kids coming to the shows, we all hang out as long as you’re not being too… weird. Some kids are not used to going to hardcore shows and seeing the people in the band, so sometimes when they see I do our merch then come to drink a beer here, it takes them a bit to get used to. We’re like “it’s no big deal we’re just normal dudes”. But when in the context of bigger shows when we support, they don’t understand “why are you here ?”. But I come here to see YOU ! We can interact and hang out, that was my idea when I was a little kid. So that side of things that can seem to be funny for younger kids, anyone older realizes that we’re just normal people. There’s no difference between the guy in the band and you.

If you weren’t touring the world with Cancer Bats right now, what would you be doing ?

I’d be at home, right now… My girlfriend has a motorcycle store that she just opened, and it’s like my favorite place to hang out. There’s a coffee shop across the street, it’s in a soft neighborhood and all our friends live nearby, so I’d love to be there right now.

We grew up in that age when music videos were killing it, you know. I’m 32 and the mid-90’s was when it was popping off. One of my favorite videos is obviously Beastie Boys’ “Sabotage”. Any of those like Spike Jonze or Michel Gondry are doing the best stuff. A video where I was in that was hilarious is Alexisonfire “This could be anywhere in the world”, they were sick of touring so they got lookalike bands. I was in it with Scott, all of my friends were in it, and we pretended we were them. So it was definitely a funny video. The new Twin Shadow video “5 Seconds” is also fucking phenomenal.

What’s the question you wouldn’t like to hear from an interviewer ever again ?

One thing I’m always bad at is “what’s the craziest thing that’s happened on tour ?”. I don’t mind it but I always drop blank ! I’m like “eeeeeeh”… The answer I always give is when I killed a dear with our car, it was scary and terrifying. But that’s not what they want, they want a hilarious story, but I can never remember any. Crazy for one person is just everyday for us.

Which show on this tour are you anticipating the most ?

We have some headline shows on this tour that I think are gonna be crazy, in Prague. Last time we played in that venue, I ended up with my head split open, so it was fucking nuts. (Liam continues the interview by looking for other crazy memories to share with his tour manager, and eventually justifies the fact that they need to remain private by sing-quoting a verse from Ja Rule’s “Between me & you”. Then he leaves courteously to do his soundcheck.)