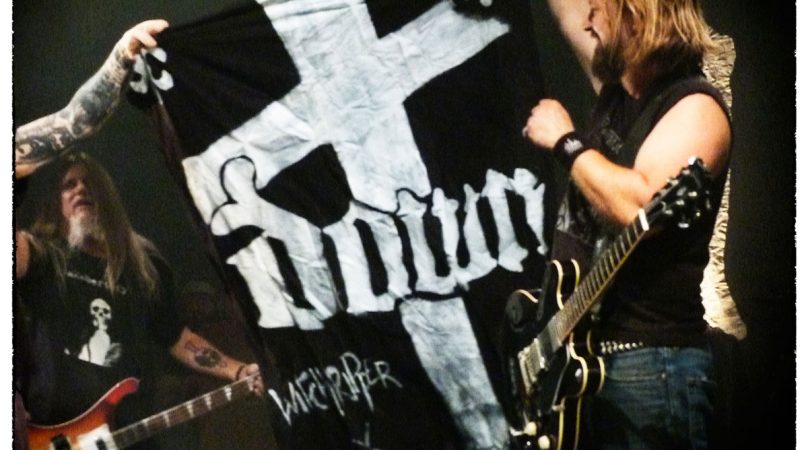 DOWN playing in a French club ? It hasn’t happened for a while. The last gig of DOWN I attended was at Bilbao Kristonfest last year, which definitely made it to my top 3 gigs of all time. Having the chance to see the guys crowned by my French fellows is a very different ball game, though.
If some people still doubted of DOWN’s live abilities, I guess they were punished the best way possible : New Orleans Godfathers gave us a fun-filled heavy performance on a platinum plate tonight. Again, DOWN provided a great feeling of brotherhood and sharing for the French crowd, because that’s what they do best…

With each gig of DOWN comes its bunch of epic encounters. Today, I’m meeting Phil Anselmo in person before the show. Although he looks exhausted, Phil welcomes us courteously in his backstage room for a 20 minutes long interview. Despite the fact that I obviously already know 3/4 of his answers, it makes MUCH MORE sense hearing them from his mouth. Not to mention that at the end of the interview, Phil compliments me on my short haircut (a totally unexpected move from him, I must admit). The man just knows how to stroke a woman’s ego !

Fans are already forming “the metal pack” outside, with their “Smokin Jesus” shirts and MC jackets, so the venue decides to open its doors almost an hour before the official opening. Considering what I heard from backstage earlier, it looks like the opening band WARBEAST (Anselmo’s proteges from TX) are quite the deal. A colossal deal. 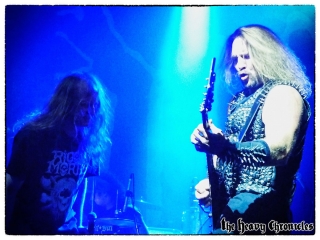 After a short escape to the merch (they got cool new stuff for girls !), the opening starts fucking hurtling off. A man called Bruce Corbitt once said “I want people to feel like they’ve been hit with a sledgehammer ten times in a row when they hear this”... WARBEAST are five dudes from Dallas, TX, they wear leather, spikes, Dime guitars and they blast thrash, fucking HEAVY THRASH METAL. Their music makes us go back to an old school atmosphere, especially as they performs their show “the american way”, ripping guitars and what not. From the beginning, Anselmo is watching his friends from the drums. He’s quickly joined by Bruders, the two men enjoying themselves until Phil decides to throw a few choruses parts through the singer’s mic. Obviously, this gesture drives everyone crazy in the venue : “it’s his way to show his support and get us the support of his fans” will confide Bruce after the gig. Generally speaking, the sound is good and everyone ends up headbanging to the band’s awesome blast beats. Let’s just salute the solo guitarist’s subtle macho man performance (what a wonderful “Your women are our slaves” shirt), whom I now call “Hulk Hogan”. Clearly a  genuine old school thrash moment, with a very tasty Texas flavor…

I was naive to think I could get a better spot on the front row, because DOWN fans are quite tenacious and wouldn’t give up their spot for a beer/pee/ciggie. To spend my time usefully, I decide to scream every time a roadie shows up on stage. That’s the only way I found to temper my excitement (yes, being so close to see DOWN again gets the fan I am all shaky). 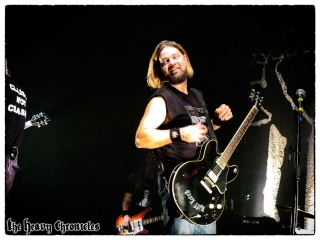 Lights turn down and what a surprise : instead of seeing the boys showing up,  Harry Nilsson’s “Down” resound in Le Bataclan. So unusual, but I love it ! A blink of an eye later, the band gets on stage playing  “Eyes Of The South” : here comes the endorphin rush and tears of joy ! After this sublime intro, they play two of the new songs, “Witchtripper” and “Open Coffins”. I’m basically not a big fan of the “Purple EP” (proof here), and yet these tracks sound incredibly outstanding when played live : they were definitely written and recorded for this purpose. Le Bataclan is all warmth and craziness, and between each track Phil keeps on exciting the audience, whether they’re on the balcony or headbanging in the pit. Speaking of headbanging, it’s time for “Lifer”. With this timeless anthem comes a major dose of joy and chaos in the pit, and the whole venue is now singing along to the chorus… 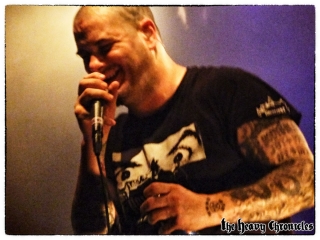 Everyone without exception here is filled with happiness, it’s palpable, and the boys themselves are grinning at everybody and showing off their funniest moves (especially Mr Pepper “merci beaucoup” Keenan who is in peak form !). To be honest, I find Phil’s voice pretty good compared with some recent videos I’ve seen… even if he relies a lot on us to provide the singing ! As usual, he contacts the most people he can : crowdsurfers, his fellow members, and of course the security guys who can’t help chuckling… One word comes in mind right away : COMMUNION. Allelujah, bros and sis’, Anselmo, Bruders, Bower, Windstein and Keenan are your prophets, whom shall guide you through the paths of Holy Heavy. Despite the length of the setlist, neither us nor the band look tired at all. Phil thanks us his very own way, admitting he knows exactly how it feels to be a fan, because he is also a “fuckin.music.NERD”. The show ends on “Bury Me In Smoke” with WARBEAST as a backup. Well actually, the show really ends on Anselmo and “Hulk Hogan” kind of wrestling, rolling on the floor together and virtually smashing each other’s face. Everyone, even the security, is watching the final performance with great amusement. It was a fucking great gig with a fucking amazing friendly atmosphere : the French have obviously been really missing DOWN, since they’ve been incredibly receptive and passionate tonight (receptive and passionate, isn’t that peculiar to DOWN fans ?).

After the gig, I decide to wait outside the venue with a handful of fans. When the guys of DOWN come out, everyone crowds around Phil A., which allows me to come and hang around with the one and only drum meister, Jimmy “Bower Power” Bower. The man is damn cool and available, that’s why I’m chatting a bit with him, sharing thoughts and anything that comes to mind. I also chat with my bass god Pat Bruders (“the new Cliff Burton” according to Jimmy), who is as warm and cuddly as the first time I met him in Spain. After that, I catch THE MAN, my fucking idol Pepper Keenan (who’s also overwhelmed by fans) for a photo that ends in a little babble in French/spanish which makes both of us laugh (I made Pepper J. Keenan laugh, goddammit !)… Anyway, it’s been a damn great night, the gig was outstanding just as much as the encounters that followed it. And for the record, it seems that we’re likely to see DOWN again quite soon, because this leg was just an appetizer… See you next year ? 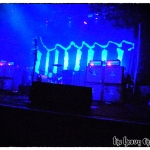 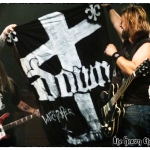 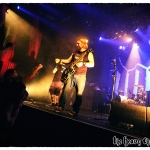 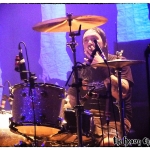 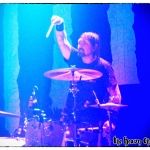 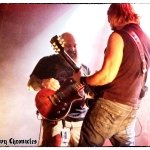 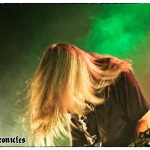 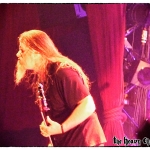 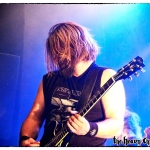 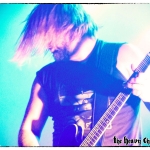 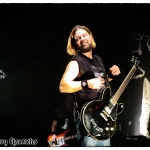 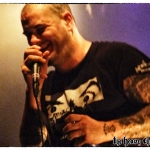 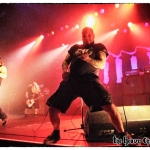 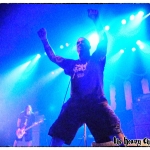 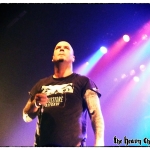 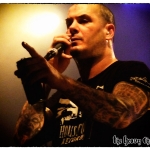 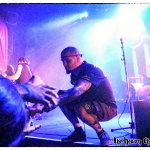 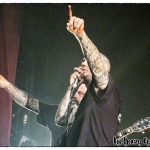 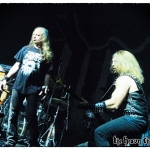 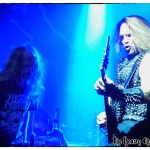