One should know that RELAPSE RECORDS doesn’t only sign super extreme metal bands, and when they discover a band that plays some kind of progressive hard rock, well the gem isn’t far. ROYAL THUNDER is a brilliant hybrid resulting from a spatiotemporal rift between Sabbath’s 70’s and Kylesa’s 00’s eras. “CVI” is ingeniously appealing and unsettling, it will dash all your bearings (what year is it, already ?) and the voice of superfemale rocker Mlny Parsonz will make you drift away, far away…

The record opens on “Parsonz Cruze”, a track that strikes a chord and makes us leap backwards, teleporting us on the backseat of a dream tour bus, stuck somewhere between Bill Ward and Jimmy Page. One thing is clear : Mlny Parsonz is without any doubt the female version of Robert Plant. The singer-bassist owns such an insane vocal power, sometimes very husky (some kind of Bonnie Tyler without the irritating side), sometimes really torn. It carries the band up to the tormented peaks of some shadowy old school rock. ROYAL THUNDER may come from Atlanta, yet the first half of their record is breaking into the southern scene the hard rock way, and it has pretty nothing to do with Skynyrd (however, one would be tempted to put their tight leather pants back on on “Whispering World” and “No Good”) !

Such as many 70’s bands, ROYAL THUNDER isn’t afraid playing long and slow jams, and they’re really good at it. We could imagine the quatuor performing in the biggest venues, getting all fired up in front of a hippie crowd under acid, we could imagine them making Ozzy’s spine tingling. One song that makes the magic happen ? Nine minutes long progressive jam “Blue”, it will consume you slowly yet so delightfully. The song initiates the dark half of the record, which plunges us into half an hour of a cold and heavy progressive rock… And if you’re not smitten with some Iommi-like guitar sound put together with velvet whispers, then you can’t be saved.

ROYAL THUNDER wouldn’t have to worry about the future of “CVI” : with a ballsy frontwoman, powerful post-psyche riffs, and an iron fist that holds the whole thing tightly on drums, the four aces of cold/doom rock are right within their hands… 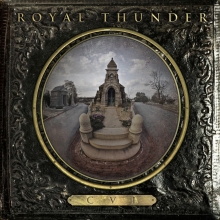