Straight up, “Eulogy For The Damned” is the recent record I’ve enjoyed the most lately. ORANGE GOBLIN haven’t released anything for 5 years, but thanks to intense touring, no one could have forgotten that these four british men are the Motörhead of stoner rock. Nothing but heavy rock pioneers playing an heroic metal full of scary stories and insane bluesy riffs.  “Eulogy For The Damned” is the most savage, thrilling and heroic album the band has recorded so far. See proof with these few eulogistic paragraphs…

The first time I lent my inquisitive ear to this record, two feelings collided inside my sensitive self : the sound is massive but the voice is disconcerting. The fact is that I had actually forgotten that Ben Ward IS an ogre. This being realized, I could focus my mind on the riff, the bass, the rhythm, and this record’s monstrosity. Starting with single track “Red Tide Rising”, which feels like a left jab, a tidal wave of riffs that makes your heartbeat fasten like after a Redbull overload (or a Jägermeister overload, considering it’s ORANGE GOBLIN). This track is the icebreaker. Welcome back my friends !

“Eulogy For The Damned” has a two-steps effect. First, you think “it’s fucking well orchestrated, the sound is fucking heavy and rock’n’roll”, although you don’t understand why such talented musicians have waited for so long before releasing another album. Then you listen more carefully, and you realize that each song has some kind of divine outreach, something that headbutts you and schools you until you’re subdued and reduced to the state of human floor cloth.

We all know ORANGE GOBLIN and their ability to play a wide range of heavy stuff : they know how to “stonerize” their sound so that their horror stories could live, they know how to be devilishly bluesy, and they also can just be rock’n’roll as fuck, just because they’re having a blast this way.  All these sides of their music are combined on “Eulogy For The Damned”, this record being way beastlier than the previous ones : what happened to Ben Ward ? I think he has mutated to his final form…

I will give you a random insight of what’s inside this golden record, so that you could have more reasons to run and buy it : by some stoner tidal wave you’ll be hit on “Red Tide Rising”, a bloody ride you’ll have on “Acid Trial”, soaked by Alabama’s warm rain you’ll feel on “Stand For Something” and “Save Me From Myself”, dark and frightening alleys you’ll barely cross on “The Fog”, challenged to a duel by the Kraken you’ll be on “Death Of Aquarius” (colossal track inside) and at last, the warrior’s repose you’ll earn on “Eulogy For The Damned”  (colossal track inside bis). So here was a slight outline of the epic adventures you’re supposed to live thanks to ORANGE GOBLIN’s music. Now I have only one thing to add : THIS GUYS ARE HEROES. 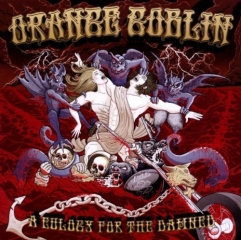