The last time I fell for a punk-like band, it was for Norwegian band KVELERTAK. It does no harm just this once, this time I was tremendously slapped in the face by a gig of ESCAPE FROM PARIS. My after-shock first reaction : getting their EP (free download here !). Conclusion : these fellas are as insane on stage as they are in studio, and their record “Paris Tales” is quite the unexpected breathe of fresh air all of us needed right now.

This band ain’t “normal”. Their name can leave to confusion, ’cause none of these 5 dudes is neither Parisian (better for them, ha !) or even French (for the most of them). Also, ESCAPE FROM PARIS’ style is close to punk, rock, anything very manly : but they’re not the average “super-manly-punk-rock” kind of band, nope. These guys are faaaar from that, for one reason : THEY’RE INSANE IN THE BRAIN. Very much so.

ESCAPE FROM PARIS in two words : festive and rebel. Guitars are fully loaded and distorted, potentiometers are set on 15, a huge tornado of revolt is blowing in your fucking face ! Because Sir William (EFP’s testosteroned frontman) voluntarily encourages you to wreck havoc along with him, just by chanting some random words like “Pay the rent, you muthafuckin bitches” or “Run solo ! Han Solo ! Fuck solo ! Djbadazjlkdjfaoozaoooooo !!!!”. The guy has this charisma, this “I’m crazy and I love it” side that is awesomely infectious. As if Zach De La Rocha and Mike Muir had raised an Italian kid, who comes out with so many punchlines that one could easily write an anthology with them. 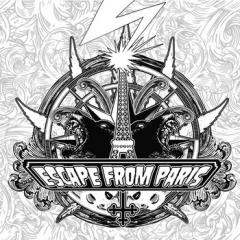