Everything about DOWN’s upcoming release. 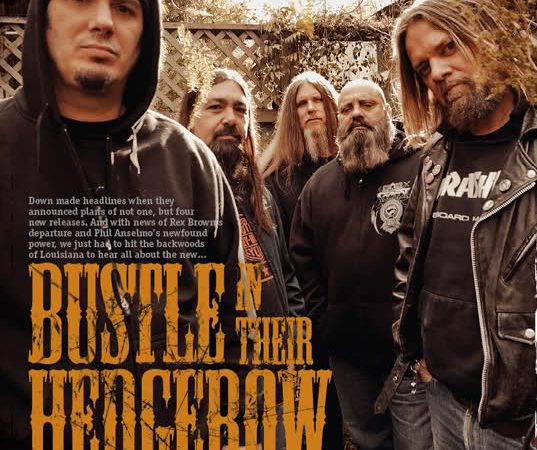 Remember when I told you that DOWN decided to release 4 EPs instead of one long conventional release ? Remember when I told you that it’ll be the perfect blending of their various influences : doom, heavy metal, acoustic and original stuff ? Yeah well, the band has been making statement over statement during the last few months, but actually they’ve just been confirming the whole story, one interview after an other. Phil Anselmo’s lair has been very busy this fall and winter, THAT was the only solid info we had from the band’s (and Kirk’s) Facebook. DOWN talked to METAL HAMMER this month and revealed a few more secrets on these four very very awaited EPs… Here’s a short review of the interview.

First of all, BREAKING NEWS : the first EP to be released will be the DOOMY ONE. What has always been undershot in DOWN’s sound will finally fly off the handle… And because the guys have a real doom culture, you can be sure this EP will count among the finest of his category. However, according to Kirk Windstein “this is kind of a heavy-sounding record for DOWN. These six tracks are not loaded with a lot of dynamics like we have in some of our other material”. Here’s the tracklisting :

Pepper tells a funny story about the song “Witchtripper” and how the title came to Phil’s and his mind : “We were down in Spain, in this little village, and I noticed that every house had these stones on the corner of the roof. And everywhere I looked, there were images of witches in people’s windows. Of course, Phil and I being like we are, we started envisioning what these stones were. We figured they were probably witchtrippers — you got witches on the roof, and they trip her up when she’s coming down. We had to have the correct song to match the coolness of the word. When I had the riff, I knew it was one that would be ‘Witchtripper‘.”

Phil wrote the doomy EP’s lyrics while into a specific frame of mind, avoiding to go about general issues yet tackling its darker sides : “There’s a lot lyrically where I’m kind of at odds with mankind’s relationship with mankind… I guess it’s more simple to say than ever doing it, such is history, but these days instead of ruffling feathers, I much prefer… put it this way, I’d rather have friends than enemies, any day. It’s easy to make an enemy. It’s easy to be negative. It’s very easy to slip into that, but it’s very tough to come with love. All you have to do is open up a newspaper and you can see for yourself, man. Right here in my own city, people are killed every day. Me, as a person, there’s no way I could sleep at night if I’d done any of those things. It makes me wonder: what the fuck are those people thinking? There is this thug worship that has led a lot of promising youngsters down a terrible path, a sometimes-irreversible path. You take somebody’s life, as an adult, you’re 16 years old and you’re fucked. I guess when I sat down to write this record, that’s where my head was at.“ With these four EPs, DOWN has envisioned a new way to release music, something that would help instigate their creative energy while allowing the fans to buy each and every EP at a really affordable price. Pepper explains what encouraged this enterprise : “I had a conversation with Jerry Cantrell [ALICE IN CHAINS guitarist], and I saw a little bit of envy in his eye. Bands know it’s a good idea, with the industry like it is these days. But it was more of a thing to allow us to have freedom and not be so stuck to one damn record. If we want to do some mellow shit, it’s always like song number nine has to be the mellow song, all that bullshit. It was just something Phil and I were throwing around. And me being the artwork guy, I thought it would be an awesome thing to have a series of images connected together.”

By the way, don’t expect the four EPs to come up consequently within small time intervals. They’re working slowly but surely. Phil told Metal Hammer : “To me, an EP is less stress for us. We have an incredible relationship in DOWN, but when we’re locked up for a month or two or three, pounding out 12 to 15 songs, it’s very taxing. Very emotionally taxing. So one, it’s easier on us, and two, it gives the music to the people quicker. You know, five years ago, we promised people, ‘It won’t take us five years to get this thing done!’ [Laughing] Riiiight.”

Jamming, writing, recording…the old way. Talking about the “old way”, Kirk stated a few weeks ago these four EPs will be “raw and organic, no computer fixing shit”.

Not so many news about the three others EP thou, but I’m pretty sure we’ll hear from it really soon (which means after the release of the first of the four EP). On this positive note, let’s hear Phil speaking his mind about today’s state of heavy metal music : “We’ve been hearing that metal is dying for about 20 years. When I was in PANTERA, of course, heavy metal was dead. [Putting on ‘record label mogul’ voice] ‘I’m not sure you’re going to be able to sell many tickets on this tour — there’s this new brand of music called nu metal that’s gonna take over the world.’ Ha! Look what happened. Heavy metal is never fucking dead, man. Never, never, never. There’s a good case for it being healthier than it has been in years. It just depends on what you’re looking for. If I started namedropping bands right now, somebody would get their fucking feelings hurt, so I’m not. And some bands come across as pretty generic. But I would take a lo-fi fucking rough shit recording of a great band over some over-produced, sleek fucking product that sells a million any fucking day at this point in my life.”

So damn true… You can find the rest of the interview of this month’s METAL HAMMER issue. Right here.