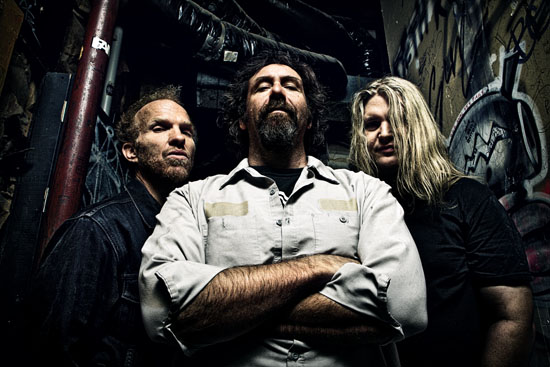 CORROSION OF CONFORMITY, one of the most focused and creative heavy band of the last decades, has been bringing one good news after another lately. I mean : THE NEW RECORD ? Almost available everywhere. 2012 TOUR ? Soon hitting the New THEN the Old Continent like a wave… They’re like the Three Wise Men everyone has been expecting for…Shit !? For a damn long time !

After a six years hiatus, CORROSION OF CONFORMITY’s three-piece lineup  has relentlessly worked on what is about to bring back a bit of a feeling into the heavy metal world. Some fans had feared that the “Animosity” era trio wouldn’t help but producing a raw-punk kind of old school sounding joint, like in “hey, we’re so nostalgic of the good ‘ol times that we wanna create that feeling again”. Huh huh. Mike Dean has been putting everyone at rest, declaring here and there that it would be HEAVY as fuck and different from what we could expect. Well my friends, the prophecy is being fulfilled, don’t you think ? C.O.C released two new tracks from upcoming “Corrosion Of Conformity” (released on Candlelight Records on 28th of February – ORDER HERE, YOU STARVING READERS !). Here’s “The Doom” and “Time Of Trials”…THEY’RE BAAAAAACK !!!!

2011 was a good year for C.O.C fans as the band hit the road in the U.S and Europe (you can read Spain’s Kristonfest full report here). From the pit, we has the great honor to enjoy the presence of best-loved fella Pepper Keenan for a few performances, as well as discovering exclusive new tracks… Something that filled everyone’s eyes with sparkles ! So yeah, back to the topic, they’re back and they gonna rock it loud here, there, everywhere. European first announced date is DESERTFEST’s, where they’ll be headlining on April 8th at LONDON’s Underworld with loads of other cool bands.

Everything about DOWN’s upcoming release.