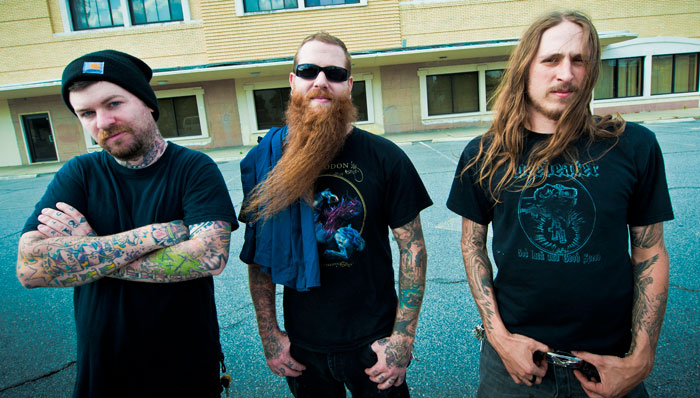 On the occasion of the release of their latest super-record “Set The Dial”, I thought it’d be cool to get to know U.S sludge band BLACK TUSK better. Because these guys produce such a stormy kind of heavy music, that even Hurricane Katrina looks pitiful compared with them, and that’s one good reason to introduce them to the people. BLACK TUSK’s music can seem hard to understand at first listening, what’s more they’re not part of these bands who get considerable press coverages : maybe their sound is a little bit too “atypical” for average metalheads or maybe they scare people ? Who knows.
Anyway, I tried to unveil the men behind the rockers, an initiative that has been pretty tedious, as the three musicians have been verybusy touring all over the US. So it’s back home that James May, drummer, finally answered to my questions…

I know bands usually don’t like to be categorized, yet journalists always tend to label everything… You are making such a melting pot of heavy, punk, sludge and even stoner, that in the end, it’s almost impossible to describe. How would YOU describe your music to someone who’s never heard of you and of any of these genres ?

We like to describe it sometimes as Black Sabbath and Motorhead having a barbecue. We really have no idea how to call what we do ! It’s fun and heavy. When we get together to write, what comes out is just what we think sounds good. Genres aren’t really for bands to come up with in my opinion. That kinda stuff is for the reviewers…

If you had to choose one southern band to which you feel the closest in terms of music approach, frame of mind and attitude, which one would it be and why?

I won’t ask you to tell me what are your influences, but at least let me ask you to pick your favourite music acts at the moment…

Now here’s something that would probably interest your non English-speaking fans : what topics do you deal with in your albums ? And who writes the lyrics ?

We all write lyrics and a lot has to do with life lessons, religion, beliefs and sometimes just rocking out and being not so serious.

BLACK TUSK is known for being a punchy and very lively band on stage, but your records also really contain that energy which is 100% raw and 100% palpable… It’s truly contagious. Where do you guys draw it from ?

Probably from our strong belief in a good live show. If you don’t put on a good show for people to watch and get into, there is no reason why they should come out. Might as well stay home and listen to the record ! If you pay to see us, we should entertain you. Simple as that. BLACK TUSK from top to bottom : Andrew, James and Anthon

I know you’ve all been hanging around with each other for a while now, so how do you get along together ? I mean, who are the three boys behind BLACK TUSK ?

We have our average fights, everyone has when they’ve been traveling together for years and know the next sentence coming out each others mouth before they say it. The big thing is resolving conflict as quickly as possible. We try to just stay focused and remember why we are doing this. It’s like your married to two other guys sometimes !

What were the best moments you lived as a band, whether it was during recording times, gigs, on the road or even daily stuff ?

Probably the days when we were starting out. We were young and hadn’t been out of Savannah too much, so everything seemed new and exciting.

What about the worst ones ? Not to rub it in…

When you drove hours on end to a show that got shut down before you even played, van troubles that never end and hangovers that carry on for days…

To end this interview, here’s the question I ask to every band : if you had the chance to share the bill with a few bands, whether they’re legendary or unknown, dead or alive… What would they be ?

The Melvins, Motörhead, and for me….Motley Crüe.

Thanks again for your time, anything to tell to your French fans ?