I have to admit it : I first got into ARMS OF THE SUN when I heard Rex Brown was part of the band. Then I checked the 3 first tracks they uploaded on their website and I cried out in excitement, overwhelmed by this 90’s rock ressurection and the quality production. So now : does the whole record live up to our hopes ?

You have to know something before listening to “Arms Of The Sun” : don’t even expect fast tempos and crazy riffs storms because ARMS OF THE SUN is a rock band with a serious fondness for classic rock and grunge, period ! I had to listen again and again to this record to finally accept the fact AOTS was NOT a metal band.

The record starts on March Of The Dolls, a skillful mix of heady grunge riffs and infectious melodies that give a glipse of the band’s commercial potential. If there’s one thing I must highlight right now, it’s Lance Harvill’s sensual voice that warms even the most average songs and brings them a very emotional color.

The band embraces and imposes its incredibly melancholic style and we inevitably end up hooked on Harvill’s well-arranged choruses and Ben Bunker’s unplacable solos. Alice In Chains’ and Soundgarden’s spirits surround some brilliant powerful rock tracks like Dead Inside, Wasted and Falling Into Pieces, although beyond all this the band has a knack for producing dark but universal ballads such as Empty, Coming Up Roses or Give Me Time…

“Arms Of The Sun” seems to be a record that has benefited a high-precision tuning work on all levels : writing, singing and tracklisting. To me this work could allow ARMS OF THE SUN to reach the pop rock circle easily. Incidentally some “odd” tracks fit perfectly to that mention about pop music I made previously : Behind The Sun, High, I Am The Walrus… It looks like Paul McCartney crashed into Harvill’s brain aboard his huge yellow submarine, some kind of odd guest in the middle of a rainy rock universe… Why not ? The whole joint still stands out with quality, even though I feel like this artist statement may be one of the causes that made Brown leave the project.

Actually, I think “Arms Of The Sun” doesn’t have 100% pretentions to grunge as it seemed to show with the first samples, BUT it has more a strong classic rock (not to say pop) character that can win many audiences. Now what remains to be seen is the ability of the band’s dear 90’s touch to reach our 2.0 kid’s Beats by Dre… 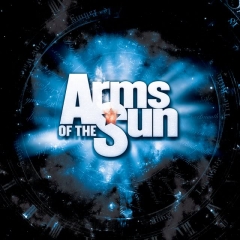