After releasing an uncompromising stoner rock piece with their first EP “Red Fang”, RED FANG scores more points with maturity and creates “Murder The Mountains”, a record driven to the extreme sides of sludge music, rallying all the senses of the listener… Beware, it’ll kick your ass HARD.

I have to admit : I didn’t know RED FANG until I clicked on this Facebook ad… and it took me 2 seconds to get converted ! This album is a real steamroller with a genuine stoner spirit : that’s the exact kind of release I’ve been waiting, for, let’s say, AGES ? Nowadays, many emerging bands pretend to belong to the Stoner Family, without really having its genuine vibe. So RED FANG makes us feel like we found Pandora’s box.

One of the most interesting things with RED FANG is their ability to mix stoner sounds and dynamics with sludge-progressive atmospheres and a little bit of a punk side. Starting with Malverde, we already picture ourselves in a shithole of the Midwest (it’s a contradictory feeling, because the guys are actually from Oregon), haystacks rolling all over the desert streets… Hearing the echo of a sandy guitar, which sounds as ethylized as a Karma To Burn riff, we think we’re about to be dragged in the desert. Instead of that, the guys make a diversion and plunge us with force and rage into a dark and decadent ambiance. Well that’s what I call  a perfect kidnapping ! Let’s continue the trip with Wires, in which RED FANG demonstrate their talent for catchiness : if it weren’t for a totally surprising and epic break, it would remind me of some good ol’ Queens Of The Stone Age. I told you : we’re going from one surprise to another with this crazy band !!!

Another of RED FANG’s assets lies in that they have two vocalists, which brings a fresh breathe to their heavy music. On the left side, we have Bryan Giles’ hoarse and imposing voice, on the right side we have Aaron Beam’s clear singing, so pleasure is nothing but doubled ! You suddenly find yourself headbanging frantically while starting to “air play” with your fingers on the catchiest stoner tunes : Hank Is Dead, Number Thirteen, Human Herd or punker track Painted Parade. Then you realize the more you listen, the more you turn up the volume. The more you turn up the volume, the more your heartbeat fastens and the more you’re likely to scream of pleasure…

I mentioned a sludgy feature, well you’ll find that darker side on songs like the fast Dirt Wizard, the gleaming Throw Up (oh my, the bass…) which makes us do anything but throw up, the lovecraftian Into The Eye and the psyche-doom The Undertow…

Diversity, energy, a lot of inspiration : it’s a pure pleasure to discover and listen again and again to “Murder The Mountains”. RED FANG have probably managed to murder those mountains with their awesome arsenal, but they didn’t kill ME : I’m asking for more and I’ll recommend it strongly to those who love heavy metal in all its forms and inner life adventures… 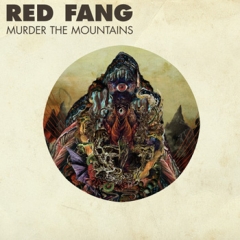