Three years after the oh-so-cool “Witchcult Today”, ELECTRIC WIZARD is back to rock the basements with “Black Masses”. Might as well say that I have high hopes to listen to a darker than dark and louder than loud record here…

The album opens with the easiest riff in the world on eponymous track Black Masses. This swinging track (!) recalls Sabbath’s beginnings in some way (when doom took its first steps), thanks to a stunning and highly groovy combo, so to speak. After 6 minutes of “Black Mass, black mass…”, I remain satisfied yet surprised by so much enthusiasm ! Let’s keep it up with Venus In Furs which maintains that hellish and insistent rhythm, and be sure that guitar solos are way more involved here than on the previous EPs ! The excessive psych side really starts to drag me into its electric spiral, goddammit ! The track is a hell of a whirl of 70’s energy, a vitamin course within an arcane world… The Nightchild (which has provoked some really positive feedbacks from the fans) is a good track, not so different on its form from the two others, but at least it feels like the British get truly enthralled on their instruments.

Patterns Of Evil still tears along strongly and drags us as it goes past with its irresistible groove, to end into a mesmerizing and slow orgy of strings screeches and larsens… The first half of the record is over : now that we have rolled down winding paths scattered with hallucinations and psychotropic smokes, we’re now ready to step into a dark cave where heaviness and slowness are a given. There goes the mammoth doom of a “Dopethrone” or “Let It Prey” with Satyr IX. A 10-minutes long moment of stoned torpor, spangled with highly neurotoxic overdrive guitar parts, but how good. Lower, even lower, Turn Off Your Mind and its reversed vocals tends to flirt once again with these psych rhythms and Scorpio Curse literally hammers on the brain, with once again a sick out-of-this-world solo.

Black Masses ends on a highly mystical atmosphere with Crypt Of Drugula, no riffs, no singing, just thunder and the distant echo of a bewitched guitar. Just for the style.

One more time, I’m far from being disappointed by ELECTRIC WIZARD, actually I’m really taken with their even more psych trip and that dirty sound that creates a more old school vibe, bringing back to life the 70’s guitar heroes overloaded with all kinds of substances, spreading out the bad word thanks to an orgasmic groove and maximum fuzz. Something that drives you insane but lucid at the same time. ELECTRIC WIZARD knows how to revive a spirit and make its initiators proud… 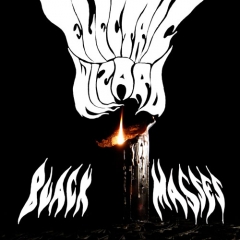