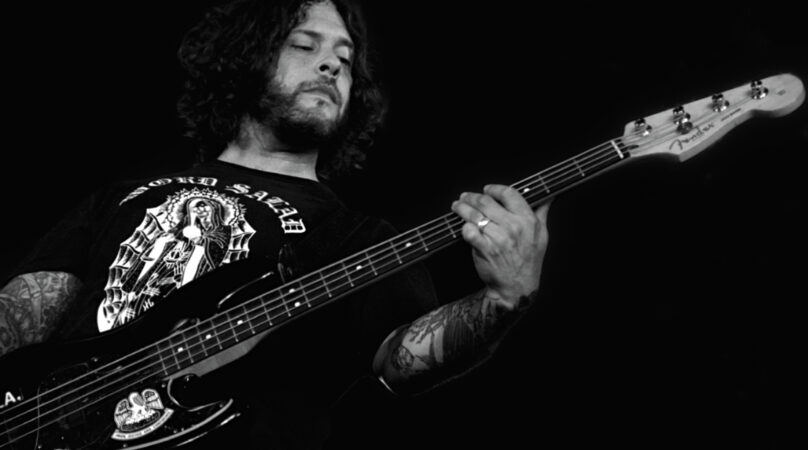 Interviewing a member of EYEHATEGOD can tell you how the latest album recording went or in which faraway lands the sludge pioneers are looking forward to playing on the next tour… But it can also tell you none of this, and lay the foundations for a reflection on humans facing their trials, their leaders, their peers or their own emotions. And that’s precisely why I was looking forward to meeting Gary Mader again, as I remembered his rhetorical finesse and sensitivity. Comfortably seated on a metal staircase at the back of the famous Roundhouse, Beeho and I were not quite ready for the deep and intense 30 minutes the three of us were about to experience…

What does it mean to be a musician in NOLA nowadays?

To be a musician in New Orleans, for me, means you are subjected to higher standards than what’s acceptable to play. There are so many great musicians here… As a representative of our city, I think that it’s necessary to upward those standards. You know, I feel it’s a privilege to be a musician and we should never lose our gratitude for that.

How have things changed since Katrina and the pandemic?

Everybody is very excited that we have music again. It brings everybody in peace to know that we can all get together again, drink some beers, smoke some weed, and listen to some bands. When you do it all the time, it’s something you take for granted. I guess that after Covid, I just appreciate what I do more. All these freedoms that we had can be taken away in a second, so now that we’re back in an open world again, everyone should embrace it because it could get bad again. But whether it gets bad again is determined by us, not the government or whoever you wanna blame for the problem. It’s up to people to take care of themselves and each other so that we can live on this planet longer.

One of the main things that have come from all this negative is that it pulls your heartstrings. People die and no one usually pays attention to life so much, and what happened to us globally kinda wakes up your emotions and it’s one of the benefits of what happened. We’ve kinda lost touch with feelings, there’s so much judgment, ugliness… No matter what country you go to, it’s everywhere, and I feel like having gone through such a huge misfortune is meant to wake us up, to remind us that we are people and that we should care for each other. So, as much as I miss all my friends that I’ve lost then, I think it’s something that was meant to recharge our feelings, our humanity… It’s good to be human again, it’s good to feel! If what happens doesn’t make you feel more human, it may mean that you have to wonder what is wrong with your perspective. It’s been a huge fucking mess but I believe it was for a good purpose.

We’ve kinda lost touch with feelings, there’s so much judgment, ugliness… It’s everywhere, and I feel like having gone through such a huge misfortune is meant to wake us up, to remind us that we should care for each other. – Gary Mader

I’ve read carefully the lyrics of the last album, they often sound political but also remain quite cryptic. Are they about migration and Mike barely having a home these days, or are they more a metaphor for something more personal and spiritual?

They are more a metaphor or a perspective, at least from Mike’s point of view. There is no literal interpretation of any lyrics we have, it’s more about pouring out our emotions than any political message. I don’t feel that I belong to the government that is established, I don’t identify with it, but I think we become political when there’s someone in a position of oppression and that’s the only time when it’s worth saying something. If you know there’s a situation with people being oppressed unfairly, you should take the human responsibility to say what’s right or what’s wrong. Everything you see on the news is just a big play, a big production and a lot of people just buy into it. But every once in a while there’s something that happens that is wrong and horrible… And you should say something about it because silence doesn’t do any good. You have to have empathy.

So, these lyrics are not necessarily driven by one political movement but even without knowing anything about politics, something in your heart makes you know when something is wrong, and the George Floyd issue is the kinda situation that brings that to light. I’ve always focused on art so I spend a lot of time in my head, but I do know what’s right or wrong. I don’t think we need to watch the news. I don’t participate in the drama. Everybody knows that everything is fucked up right now and you don’t need to be reminded of it. You need to focus on what you can do to make it better. And that may sound weird coming from somebody from Eyehategod, hahaha!

We become political when there’s someone in a position of oppression and that’s the only time when I think it’s worth saying something. – Gary Mader

Not at all! Trying to change things can be about art, it’s not always about going in the streets and throwing rocks…

Totally, it’s a way to attract attention to the problem in the same way that throwing rocks in the street does, except that we throw riffs instead of rocks.

You studied psychology, so do you have a theory about the fact that, these past two decades, there has been a surge in popularity for all the grim, dull and nihilistic subgenres like sludge, funeral doom or black metal?

It’s probably a reflection of how things are going in general. I’ve recently watched the “The fear and The Dirt” documentary about the Sex Pistols: the social climate has so much to do with the music that comes out, and right now we are in pretty dark places. I think people are attracted to it because it brings all that out. We all need to get it out so it’s not stuck inside of us and we can process it. I listen to a lot of rap too, and it reflects what’s happening in the communities, gunfights, drugs, and all that. All the music that comes out is charged with what’s in our lives and needs to be said. Not necessarily hatred but mostly disappointment and anxiety and despair and all these kinds of negative feelings, but it’s necessary that happens because all that is unexpressed is just perpetuated. I’ve never thought that the cool music of the 60s was happy sounding but if you read the lyrics, there was also a hint of discontent about the Vietnam war and all these things to be against. At the end of the day, it says the same thing but in a different way by different messengers.

The social climate has so much to do with the music that comes out, and right now we are in pretty dark places. I think people are attracted to it because it brings all that out. – Gary Mader

Something a bit lighter now. In an interview, Mike (Williams, frontman) said that on tour, the rest of the band likes to nap or do nothing before the show, while you are the only one who likes to walk around cities. Can you share one particular experience?

Ahaha that’s a good one! I’ve seen so many cool places and I would say my favorite is Athens. The second time we went, I had a whole day there so I could see everything I wanted to. I was walking at night close to the Acropolis and I heard a Sting song, it seemed like a cover band playing Police but it was really Sting playing at the Odeon. I sat and thought “how weird”, I’m not that into Police but it was more the irony of the situation of this guy playing in this ancient place… That was one of my coolest experiences, seeing all these antique places with this special energy and hanging around with the street cats. Every time we go there, I meet different people and try to see different places. How many people in NOLA can go where we go? Playing music is already a gift but so is a tour and when I’m on tour I wanna see something everywhere, and I wanna see the way people live. I put myself out and in their country, so I can experience a part of their life. I wanna take advantage of it because we won’t do this forever.

Last one: how do you picture yourself as a musician in 20 years or so?

Well, I hope I’m gonna do the exact same thing but better. I love to play in Eyehategod, we are all very close friends so these are good times! So twenty years down the road, I can see us still being a bunch of passionate dudes playing loud music because it’s fun for us. And beyond that, I’m setting my goals for living till 147, so I’m not really sure what I’ll do after Eyehategod but it will be something with a guitar or any kind of music. If I’m 147 and playing on a porch that will be cool too. I just wanna live life to the full and jam as much as I can.