INTERVIEW: dive and die with Greenleaf. 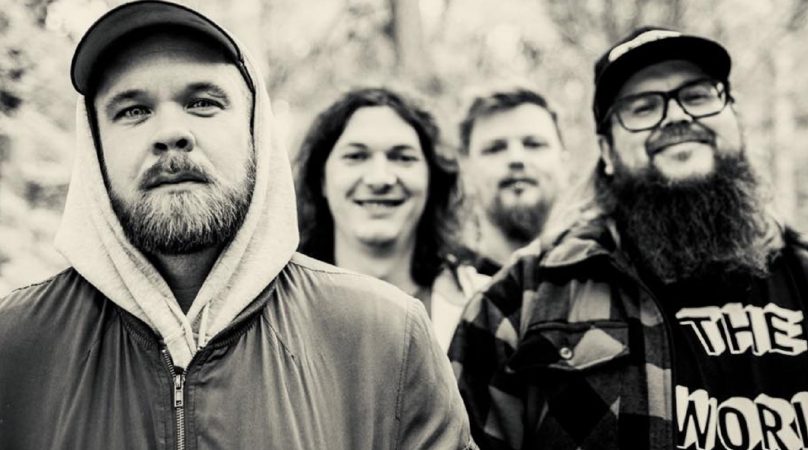 The Scandinavian spleen, unpredictable tempos, a stormy but inspiring divorce, undead musicians, goats and turtles, and scuba diving at your own risk… Welcome to the colourful world of Sweden’s own GREENLEAF, whose eighth album “Echoes from a Mass” is still available in all good record stores, and who just signed to Magnetic Eye Records for the release of their upcoming ninth studio release. We caught them at Desertfest London this spring, the morning after frontman Arvid Hällagård’s birthday and definitely too early in the day for everyone involved in this interview. Three rounds of beers and 30 minutes later, here’s what we all came up with.

When it comes to heavy, black, death or any retro thingy, you Scandinavian people always nail it. How come? Why the fuck?

Arvid Hällagård (vocals): Because we’re so bored and it’s really dark and cold… We have to do something, so people tend to play hockey or music. We also have really good music education, so if you want to learn an instrument, you can do it for free. We have such high taxes but it can be a really good thing, because if you want to discover drums you don’t really have to own a drumkit, you can actually try it.

Tommi Holappa (guitars): It’s also easy to access rehearsal rooms. Basically, it’s almost free here. You can get money to buy instruments when you are young. The government helps a lot if you want to.

AJ: And I don’t know about the rest of Scandinavia but at least in Norway and Sweden, there’s these traditional melodies. I don’t know why but I think it’s related to old folk music. We have a sense for sad melodies. We have this Swedish word vemod that means “constant sadness”.

TH: Even in heavy music, there’s always a tiny bit of sadness and darkness behind it.

AJ: It’s poppy but sad, like emo but darker.

Last year, I read in one of your interviews that you were wondering why all these Swedish bands were so famous abroad, when nobody knows them at home.

AJ: We kind of never play in Sweden. We can do like seventy shows a year and maybe one in Sweden. But it’s getting better now. The heavy scene is growing.

Is it the same for bands like Truckfighters or Lowrider?

AJ: Truckfighters are a little bit more known, but much more known outside of Sweden.

TH: If they played in our hometown, I don’t think there would be a hundred people. In Sweden, especially in Stockholm, there are so many good bands that it is really hard to come across. If you play in Germany, a small town is 600 000 people, whereas in Sweden it’s 10 000. And it doesn’t matter if it’s a weekday, there are always people coming. In Sweden, if you play on a Monday, there are 20 people…

TH: We have to be able to play it live so we can’t put too much. Sometimes you overdub guitars and when you play live, there’s no power.

AJ: We record together, we don’t do track to track, and the only things we put on afterward are guitar overdubs and vocals. We don’t do a click thing.

TH: Here’s a secret for you: If you want to hear that it’s live, just start one song from the beginning then you skip to the end and you always hear that it’s faster. It’s one of those things when you hear hear, it’s like “oh fuck! Why did they leave this?” But our producer Daniel says “because it’s cool! Just listen to Jack White, everything is off tempo all the time and this is cool”, and I’m like “ok”. But afterward, when the album is out, I’m like “why the fuck did I leave that? I can’t stand it”. But in the end, it’s a good thing because you can hear that it’s live. If we’d play to a click, I think it would get a bit stiff…

AJ: The albums I like the most are old albums when you can hear when they are doing stuff wrong.

TH: Energy is the most important thing. It should sound like the guys are having fun with their playing instead of being stiff.

“The new album may have been the hardest and easiest to write, because I was really sad. I had something to write about and it was also reallky therapeutical. I could talk about stuff that’s real.” – Arvid Hällagård

On The Heavy Chronicles, you once said: “if we talk too much about a song then we begin to hate it”. Is it still true or are you now able to deconstruct a little more what you have created, especially when there are so many intimate things in the new album?

AJ: It’s weird because sometimes it just happens. Like “Tides” on the new album that we wrote in one hour. Sometimes, the melodies just come like they’re waiting for you and sometimes you have to fucking kick it out the ass.

TH: For “Tides”, I was just playing and he started to sing and we were thinking “oh yeah, the song is there”. You could just feel that it was supposed to come here but some others take ages.

AJ: The new album had maybe been the hardest and the easiest to write because I was really sad. I had something to really write about and it was also therapeutic. I could talk about stuff that’s real. Usually, I write pretty fictionally, I try to create landscapes but, in this case, it was almost getting too personal. So yeah, a hard but easy album to write.

TH: We don’t rehearse together all the time because we live in different cities. We come up with song ideas, usually a riff, then email it. If it was a happier song, he would probably not have been able to feel them cos he was fucking depressed so it naturally became a little bit darker. You can really hear that he is suffering. We were all fucking impressed in the studio cos we had three days to record the vocals but did all ten songs in one day. You can hear on some songs we recorded at the end, I think it was “Needle In My Eye” and “What Have We Become”, that he’s becoming sore.

AJ: I’ve got that kind of Mark Lanegan-ish breath voice but it works really well. That was a good way to do it. After we did “What Have We Become”, I remember laying down and being like “okay, no more”. (Laughs)

TH: When you returned to the control room, you were shaking and didn’t know what to do. You just sat down and we were smiling cos it sounded so good. You had done such an awesome job.

Did you feel better afterward?

AJ: I live in Stockholm so I went home for a little bit and I was like « Ok, this will probably sound bad tomorrow. I pushed it too hard » But when I got back to the studio and listened to it I thought “I did well” and that made me feel better. It was a weird recording cos I had a terrible divorce and then one month after that covid happened so we didn’t have any shows. My whole life just went on a pause. Some of the songs are tough and I can also feel that maybe at that time, I was a little bit harsh on some things about my ex-wife.

TH: But that’s how it felt at the moment, it’s your diary.

It was YOUR truth at this moment…

AJ: Exactly, especially « Needle In My Eye »… I was angry, but I guess it’s the benefits of being a musician: you get to talk shit about people.

TH: What about the next album? You are pretty happy now.

AJ: Fuck that, you’re gonna have to make me sad again…

TH: I will make you hate yourself, maybe that will work. (laughs)

AJ: We’ll see what happens with the next album, I don’t know. I may have to do drugs, we will figure it out. (grins)

That would certainly help your new Lanegan-ish voice.

AJ: I just hope I don’t die. I mean, at some point I will, of course. And it will make me sad.

AJ: Maybe that’s what we need, and we would probably sell more records. (laughs)

Speaking of death, if you could rise one musician from the tomb, who would it be?

AJ: This is a hard question… There are some people that I don’t want to come back. Why would you want to take Kurt Cobain back for example? He did all the good things he could do and then he was done. Same with Jimi Hendrix, you don’t want him to come back. They would be these old dudes, probably fat… Instead, can I save somebody that is still alive?

TH: I think I would save Scott Reeder. He’s the nicest guy in the world and he deserves more than being just a bass player. He’s one of these people who don’t deserve to die.

AJ: I wonder which people I would be the saddest to see disappear… It would be a drummer. I just love drummers. They are the best players. I would definitely not save a singer, they are all assholes (laughs). I would probably save Buddy Rich.

TH: Imagine if you could play with Buddy Rich!

AJ: And the bass player?

TH: Probably Scott Reeder or Geezer Butler, but they’re not dead. Maybe Cliff Burton. We almost have a band, so who would be the singer?

AJ: I would like Bill Withers to sing by my bed when I’m going to sleep. Damn… That’s a fucking superband and now we need a name.

“I have a diving license, actually. I can actually educate people about diving. Would you go diving with me?” – Arvid Hällagård

The last question is our traditional white card, so just say whatever you want people to know.

TH: I have a boring life and I play music with some dudes.

AJ: (introducing Greenleaf drummer) Here is Sebastian by the way, he’s also in the band. Most of the time, people don’t understand that I’m unserious and that I usually lie about our occupations. That’s a thing we have. Tonight, Sebastian is collecting goats.

TH: I think you’ve done it before, you need something new.

AJ: He could work in a turtle museum, but they wouldn’t be dead and walking around. And there would be different types of turtles: low necks, straight hawks, fender-benders…

TH: Sounds like you know a lot about turtles. (laughs)

AJ: I have a diving license, actually. I can actually educate people about diving. Would you go diving with me?

AJ: I think it’s crazy that I can actually make people go under the water with oxygen and tanks, and I have to check the tanks before they go down.

TH: You don’t know this guy… He loses everything.

AJ: That’s the craziest thing because they would die! We can collect the still-alive singers and let them dive with me, and die with me (laughs). Underwater dead men… That would be the name of the band: “The Dive and Die”! (laughs) Dive and Die: course one. Because there’s only one course.