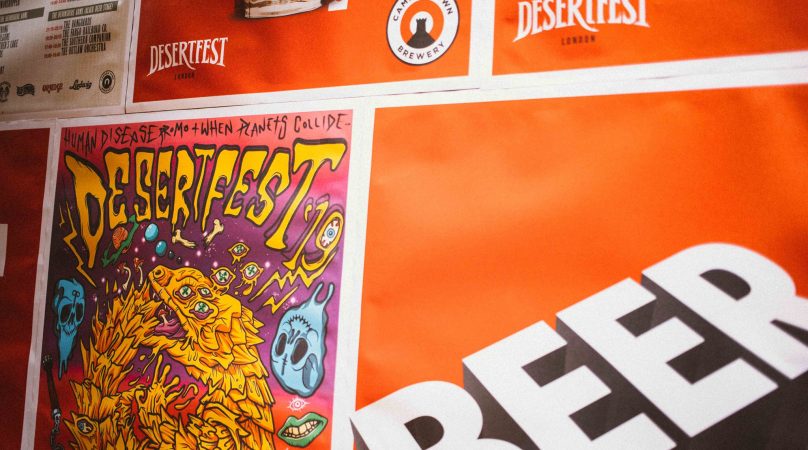 The time has cometh! The historical London edition of DESERTFEST is not only a must-go, it also kicks off the festival season the right way. Rising back after the 2-year pandemic, it is once again about to treat us to a top-quality line-up, from lords of the stoner, doom and sludge realm to up and coming acts and total discoveries, with a broader range of genres than the sole Desertfest name implies (the Friday night at Black Heart won’t be for the faint-hearted). The promoters put on a great spread for a 10th-anniversary edition that promises to go down in history. Here are seventeen bands you must check out or you’ll regret it until the end of your hangover! (PHOTO: Sam Huddleston – WORDS: Yannick K., Lord Pierro and Beeho)

Lowrider – If there is one band that has given back its golden letters to the stoner genre, then Lowrider is the name. Their latest offering “Refractions” has been Album of the Year for two years and is not likely to be dethroned, perhaps except by their next record. One more thing: they will play unreleased tracks during their Ballroom set. Unmissable! – LP

Steak – The Desertfest family party would be nothing without Steak, and there’s no reason why you’d miss them. Steak plays at home to present their recently released new album on Ripple Music. Not bad for a release party (that will probably end with an ovation. Massive party in sight! – YK

Slift – We know that the destiny of the Slift spaceship is to go farther and farther toward distant skies. Along with fellow Frenchmen Hangman’s Chair, Slift is one of this country’s finest heavy exports. Desertfest London will be their last stop in orbit, the mandatory passage before spinning towards the psychedelic stars. – YK

Bonnacons of Doom – The promoters always like to hide a few unknown gems to catch us off guard, and Bonnacons of Doom is certainly one that caught our eye. Supernatural vibrations, repetitive frenzies and super high-pitched vocals should finish convincing you that this weirdness is worth more than the buzz on a poster. – YK

The Brothers Keg – Count on guitarist Tom Hobson to best describe The Brothers Keg’s sound: “HP Lovecraft meets Queen’s Flash Gordon while listening to Jeff Wayne’s War of the Worlds soundtrack at the wrong speed, all the while smoking a joint soaked in poppers”. Proof that you can Doom music can put a smile on your face. – YK

Integrity – If hardcore has to be embodied by one band outside of the US, Integrity would be the absolute reference and their fourth decade of activity shows just how strong this band is. Their Desertfest will be their only show in the UK so don’t miss their headline set at the Underworld. – LP

Dunes – There might be no desert nor even sun in Newcastle, but that doesn’t prevent Dunes from throwing down a pure and energetic brand of stoner, which will be the perfect way to go with your next pub stop and wildest partying endeavor on Friday. – LP

Orange Goblin – OFGB is simply the best cure after two years of sonic death, with their 25 years of heavy rock hits coming one after another at full blast. For sure, madness will fill the Ballroom and sweaty bodies will happily bump into each other for what is going to be the most insane and unmissable appointment for all stoneheads this weekend. – YK

Shellac – Why would a noise rock band be on this bill? To kick your ass and destroy your eardrums! Albini’s band appearances are usually just as frequent as Halley’s comet passages but their shows are just as memorable as they come as unexpected. – LP

Elephant Tree – The Covid crisis hit those guys strong, as they intended to support one of the greatest albums of 2020 on stage. Their latest album “Habits” is the expression of a cultured band with an acute sense of melody and ingenious songwriting shaped by contrasts, that brought a lot to a scene that tends to lack foresight. Catching them at Desertfest will only do justice to their work. – YK

Hangman’s Chair – The Parisian suburbanites take over London with a new album under their arm, one that should inevitably remind British audiences of the best hours of coldwave and most undoubtedly turn the Underworld upside down with the sheer beauty of their songs. – LP

Your Highness – The Belgian royalty is about to take you to a damp and poisonous bayou with their sludge metal dripping all over the Black Heart’s walls. Add to that a sharp-edge punk attitude, a healthy dose of humor and you get the perfect slap in the face. – YK

YOB – How many doom bands worthy of the genre are still alive and able to turn heads in just a few notes? These can be counted on the fingers of one hand and there is no doubt that and YOB is one of them. Prepare to be crushed by their mighty heaviness and be on a massive comedown after their set. – LP

1782 – Bearing the torch Italy’s horror doom tradition, 1782 is not into fun and playful music. At the risk of making the Devonshire Arms’ cave in, the promoters prove once more that there is a band for everyone’s taste at Desertfest London. – LP

Trippy Wicked and The Cosmic Children of the Knight – You might have never heard of them, although they comprise prominent members of the London stoner scene (Elephant Tree, Stubb…). Seriously, how can one not love their colorful covers of Crowbar or Sleep’s “Dragonaut“, or fall in awe when listening to the atmospheric doom of their latest full-length “Underground”? You’ll thank us later. – B

Ten Foot Wizard – To wrap up the weekend in a big bang of bluesy riffs and FUN, the dead good Mancunian in Ten Foot Wizard will make things smooth as f*** with their potent mix of “power blues, cat rock and fruit metal extracted from the beard of Zeus”, and get you ready for the ultimate afterparty of the weekend! – B

Huntsmen – The good thing with Desertfest is the number of impromptu discoveries it offers. Signed to Prosthetic, Huntsmen are self-proclaimed ambassadors of an Americana Metal that jauntily mixes the heavy riffing of Mastodon or Pelican, while bringing the 70s psych and pop of Pink Floyd or Fleetwood Mac. Fans of well-crafted hybrid music will get their money’s worth! – B