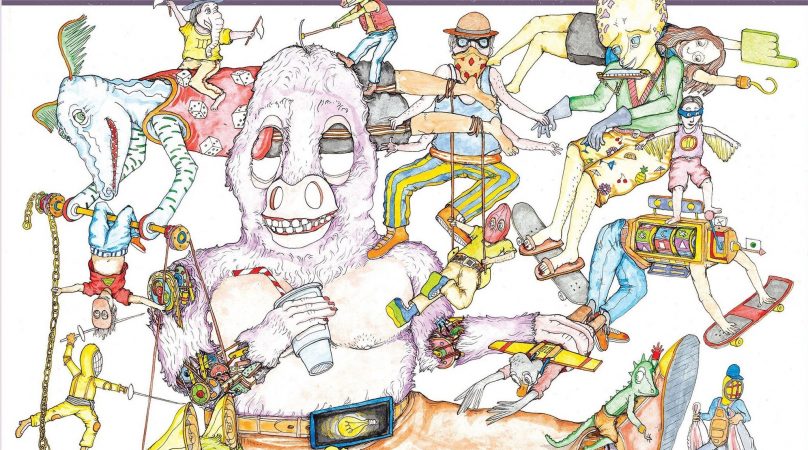 The Grasshopper Lies Heavy is such a prolific act in these roaring ’20s. After an excellent album last year, the sludgy noise rock band is back with a new Split production shared with the none less busy Woorms which, I admit, I did not know before listening to this collaboration. Let’s look back at this very discrete yet super audacious opus.

When I start listening to a split album I’m always torn between the thought that one band will overshadow the other or that the final result will feel forced and lacks homogeneity. Despite this initial fear, I’m a sucker for good splits if the exercise is done properly.

This time around, things felt really natural. The Grasshopper Lies Heavy do what they do best by stacking filthy, fat and dirty riffs while bringing a few dissonant melodic lines or quieter parts where needed. After all, they do not want to lose the listener. Rhythms are just as messed up as usual and still borrow as much from Insane as they do from the Melvins while the hardcore screamed vocals are the icing on the cake. It’s efficient yet obvious. In the end, why would they mess more with an already very messy and unorthodox recipe?

On this first half of the record, “King of Opinion” is the track that I enjoy the most for it’s such a powerful and catchy one. I also like a lot the hypnotic “Daun” with those very well-crafted spoken word parts.

As we start the second half of the split, I must take a deep breath and brace myself before I embark on this 21 minutes long journey. This is even more true after the instrumental, atmospheric and almost post-hardcore “Unending Mediocrity” that closed the TGLH section. We quite quickly realize that the band’s main task was to prepare, filter and cut through for Woorms to shine.

It’s in full apnea mode that I dove into this noise prog fall, both surprising and refreshing thanks to its experimental orchestrations. This is “Areola Borealis”. The bad trip is near the corner but I can’t deny the overall charm of this track. Typically the kind of proposition that a big chunk of the audience won’t vibe along to but what can I say, it just works on me. The mix is sometimes a bit too weak and aerial but it does give the tune a very distinctive lo-fi aesthetic that is just velvet to my ears.

Samples are put to good use and so do the scarce and grandiloquent vocal lines. For more than 20 minutes, we navigate in cloudy water, moving from perfectly executed ideas to insane over-the-top craziness to a few well-placed straightforward moments to keep us from getting seasick. For the last five minutes, an acoustic guitar strikes over a few dying keyboards sounds creating a quiet and intimate finish with sung vocals. Are we a group of hippies who just spent a week in Salem or are we city punks ready to fight? I do not know anymore. I hear birds, is this it? Did we just land? A unique adventure ends here and all the unsolved mysteries I encountered will remain unsettled.

This split album delivers. It actually gave me everything I hoped for but even everything I did not even know I wanted. I got lost on a quest that is definitely not mine but I came out of it all grown up or, at least, emotionally touched. This split is not for everyone, not even the most adventurous but for the bravest of the bravest amongst you, I wish you all a good listen, and may you be the same as you were before!

VOID ODYSSEY fills your veins with as much fuzz and doom as can do.