Restless Spirit pack a punch with their heroic stoner metal. 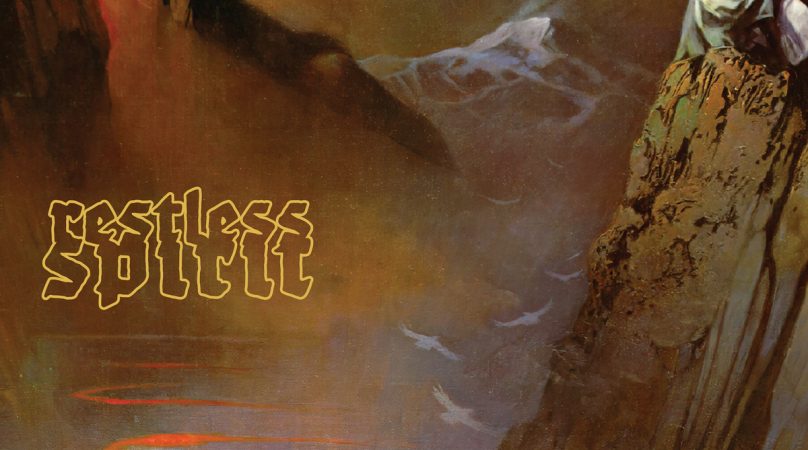 So let’s start the year with a correction. A correction in many ways. Skipping through yours truly’s attention, “Blood Of The Old Gods” aroused my curiosity well after the writing of the traditional end-of-year list. Don’t count your chickens before they’re hatched, they say. So let’s do justice to Restless Spirit’s work and let’s start 2022 under better auspices: one made of a huge riff avalanche. Yes, it’s about to hit you and you will turn the other cheek. Yes, you will like it. They were completely unknown to me yet they seem to have carved a prominent place in the US underground, so let’s start the year with this great discovery. A treat for your mental health and ears.

There is a certain logic in the choice of an artwork by Frazetta, the master of heroic fantasy and official supplier of heavy metal covers. Because there is nothing uncanny about it, and it has everything to reassure. We know right away that the next forty minutes will be the perfect soundtrack of your next Warhammer or Dungeons & Dragons game. Whereas we could have remained stuck in the 80s, Restless Spirit breathe some fresh air into the Heavy thanks to their sludge and traditional doom influences. The outcome is a concentrate of riffs and crazy cavalcades that feed extraordinary and soaring epics of fancy blended against a doom drama backdrop.

Mastodon comes to mind, precursors in aggregating different styles through various ages and trends. But don’t be mistaken: this album is only progressive because of the length of the tracks. At least it will remain between the lines. For “Blood Of The Old Gods” is a collection of thick, neck-breaking riffs. But it also abounds in a multitude of ingenious parts that tie wonderfully. You get caught up in its constant twists and turns, sweeping away any form of indigestion or boredom. Compared to their debut, Restless Spirit reduced the number of tracks, remained concise to preserve a welcome tension, juggled skillfully between complex structures and addictive melodies… without making the listening lenghty. No need for a double album to offer a thrilling experience. We ask for more!

And yet, the first listening won’t be decisive. It’s only after a few repeats that the underlying progressive construction reveals its subtle complexity. For instance, “Judgement & Exile” is such a fire-driven sequence of riffs and solos that it’s a contender to be a main Air Guitar theme. The title track remains the album’s centerpiece into which all three members bring their virtuosity — a pure heavy stoner treat put through the sludgecore wringer. If you don’t get up and headbang straight away on this, then you’re a lost cause. And as if crushing your bones wasn’t enough, the finale “Haunted” will tear your heart out with its poignant lyricism.

According to the band, “Blood Of The Old Gods” was a bit of a last chance album. So go for it and tell them how good it is. Then tell your friends. And your neighbors. Then turn up the volume so they can hear you all the way to hell.