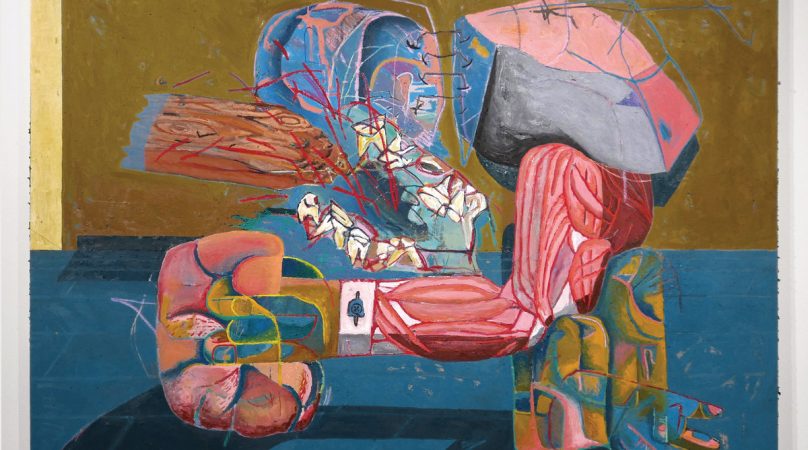 Why should we always complicate things? Why do we keep making our lives harder? Is it due to our human condition that we keep on overthinking? If that is the case then The Grasshopper Lies Heavy personifies an untamed and pure beast in the form of three dudes from San Antonio, TX. No time to think twice, we dive straight in. With “A Cult That Worships A God Of Death”, they deliver an instinctive experiment, keeping things simple while doing them the right way and with an unmatched level of honesty.

A cult that worships a god of death”, under this unexpected title is a fast-paced album made of 8 tracks for a tad more than 40 minutes. The noisy intro sets the stage, and here we go for the first batch of riff-heavy songs, all clocking in at 2 to 5 minutes, pedal to the metal style. Everything goes fast, it’s powerful, it cleans your hear and loosens your neck while your teeth and hands are tightening. “The Act of Buying Groceries” is the first single off the record and is rooted in a massive riff and a strong voice that tastes like spit from 5 miles apart. Here comes a chaotic guitar solo to bring some freshness and we’re back into it.

I have to wait for the instrumental “A cult that worships a god of death, parts I-IV” to catch my breath from this exhausting pace. And this break is more of a highlight. We’re facing heavy slopes and try to survive by pedaling, hardly breathing. This is simply the album’s climax. It starts with a hypnotic riff, only stopped by waves of violence and drums that are loud enough to saturate my audio system. The mood is set and I get through the first minutes completely impressed by this unheard mastery. Then the grace falls on us through that atmospheric, melodic, and slightly dissonant bridge. That’s quite formulaic but so well crafted that I could not resist, especially halfway through this record. The parenthesis lasts for quite a while, enhanced by using all the tricks in the book: from the quiet synths to the military snare pattern and the sound getting larger than life… Until, after 6 minutes, we let the beast go. It’s savage and hungry for anything that comes nearby.

The subtler but classy “Bullet Curtain” is in charge to restart the engine: this follow-up to the title track is another instrumental piece that slowly builds up. It’s by far the most post-hardcore and post-metal-infused song on this record, reminding me of Russian Circles — my personal highlight of this second half. Showing off The Grasshopper Lies Heavy’s songwriting skills, whom sure can write more ambient, darker and softer tracks too.

To wrap up the album, the band gets back into the heavier territory and offers a track reminiscent of Conan. I would have very much welcomed the return of vocals after an instrumental 15-minute, but they keep it that way even though the track has less to offer. This sums up quite clearly what this album is all about.

While the first half is screamed through, very edgy, the second half is atmospheric and instrument which quickly has us a lost. The band sure displays all they can do but I would have preferred the tracklisting to mix up things more. It would have probably helped some of the tracks to stand out more. I ended up with the impression that this was just two EPs kind of glued together and while this has a certain charm, it definitely does not allow the album to reach its full potential. And that’s regardless of all the very good riffs and perfectly fitting production. This album is not perfect, it’s a bit naive and slightly butchered but it is still very interesting. For genre aficionados, it’s a good discovery. For the others, this won’t be the album of the year.