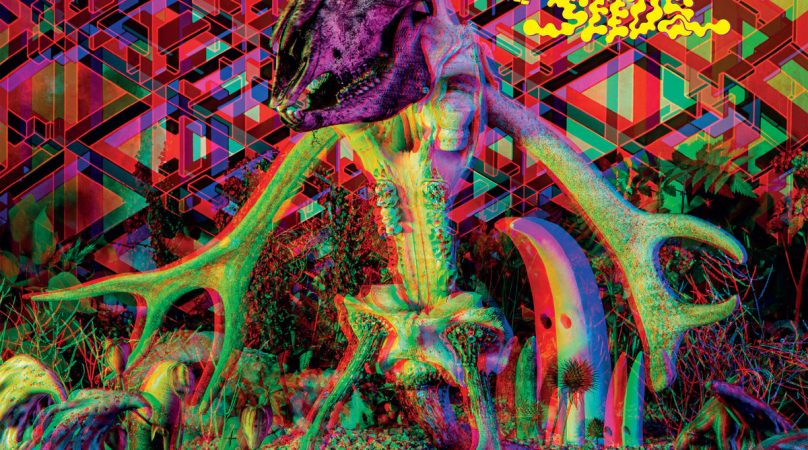 Domkraft is the avant garde of a brand new pulse in the grand scheme of all things doom and sludge. For as long as one can remember, it was deemed inappropriate or almost blasphemous to bring in a new breath and a refreshed energy in these two genres, tailored for those in the know. Sure, it’s always been appreciated for bands to blend in thrash, stoner, noise, prog or black metal influences but you had to keep a taste for homemade production, everything had to be heavy as fuck, you had to talk about occultism and weed, while paying a constant tribute to those who came before you. Conformity coming from those who want to corrode it.

Just like Pigs Pigs Pigs Pigs Pigs Pigs Pigs, DOMKRAFT are parting ways with this old way of thinking. Obviously, no one can deny the band’s doom sludge pedigree. From the wall of unstable fuzz, to rare and wailing vocals, the love of slow tempos or the slightly under mixed vintage drums, it’s all here. But Domkraft stand out through a strong sonic identity and the refusal to obey the genre’s codes and common influences.

“Seeds” is Domkraft’s newest album and the world is not ready yet. Even after two full lengths, two EPs and two live albums, the world is not ready yet. Not ready to be hit by such a violent and massive wall of riffs, thanks to an amazing and modern production by Karl Daniel Liden (Dozer, Greenleaf). Not ready either for the multidimensional songwriting that never hesitate to drift away from bass-laden territories to bring in screeching lead guitars. Those are bity and remind us of the rawness of the Stooges. Ultimately, people are definitely not ready for this crazy visual aesthetic (I mean, look at this gorgeous 80’s neon 3D artwork)!

Domkraft planted 7 “Seeds” of intense destruction. That’s all they needed, 7 tracks and 44 minutes to kill any doubt anyone could have. The opening title track got me hooked on the production, a clear demonstration of strength yet surprising with these pseudo accelerations when the fierce high pitched guitar lines kick in. Then comes “Perpetuator” which offers a more atmospheric ambiance, yet chaotic at times. Chaos that we will dive deeper into with the deconstructed “Into Orbit”. I have to give even more extra credit to the band for this mammoth bass, the aerial cymbals and more upfront vocals on this one!

Halfway through the record, we can acknowledge its logical and clever progression. I was taken on this trip with no remorse. “Dawn Of Man” brings us back to a more visceral form of Sludge with its Melvins-like accents and a nice role inversion. The bass takes on the super fuzzed-out part while the guitar is more subtle and acts as the band master, the invisible hand guiding the song.

If you ever got asked what differentiates Sludge from stoner, you would use “Tremors” intro part. The light touches of dissonance, but mostly this “always on the edge of self collapsing” fuzz sound. To me, this is what Sludge means. This song, with a less obvious structure and these random noisy lead guitars incursions is surprising yet extremely pleasing to my ears. A short ambient track with “Krank Blekhet” and here we are for the album finale and longest track “Audiodome”. Despite the format, this one kicks in with a punk hardcore riff and faster tempo. The riff is deconstructed, torn and repeated until it reached an almost post-metal status leading us to the last minutes of “Seeds”, rather back to the roots with a military drum pattern and the final notes of loudness and heaviness to finish us. Domkraft stands for judgment by power. What else did I expect?

Within 44 minutes, Domkraft offer their very best and a lesson in songwriting, production, track listing and album progression. Despite the band’s underground status, this is the best Doom Sludge effort of the year hands down, and a strong contender to Best Album of 2021!