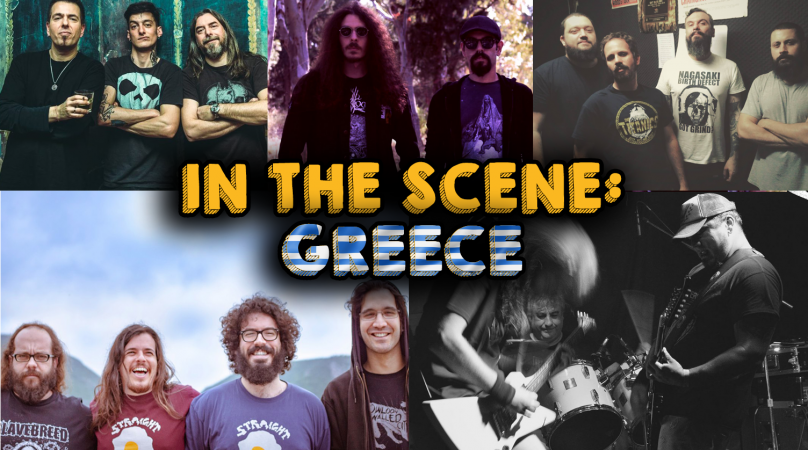 There is no doubt that that the Greek stoner rock scene is one of the most active, yet the underground scene keeps providing high quality bands who keep missing the audience’s radar. Here’s a quick roundup with the latest albums from five bands you need to check out now, until they come up with new material: Dendrites, Last Rizla, Acid Mammoth, One Man Drop, Krause.

After honing their sound within other bands, these long-time friends offer a journey back to the 90s reminiscent of ‘Back To The Future’. “Grow” rejuvenates the sounds of this era, when it was trendy to be into the Seattle scene (just hear their Alice In Chains-esque “Leave Me Behind”) and southern heavy metal. Catchy and biffy melodies worthy of NOLA bands, the filth of Black Label Society without the endless solos: this is the perfect soundtrack of a night out with some good friends, beers and Jack. Find Dendrites on Facebook.

With a careless and fun attitude, this DIY collective is one of the most interesting sludge bands that have graced the Greek scene these past few years. Violent and disturbing, as fast as doom, “Mount Machine” will tackle you to the ground from the very first riff and bury your face in the ground, crushed by the thickness of the sound. And because you’re loving it, you’ll stand up and headbang like never on the rest of the album, ready to whip the air with your hair and break your neck. Never such a talented band has remained so overrated. Do them justice and check them out straight away. Find Last Rizla on Facebook.

Just like their Polish scene-comrades Dopelord, Acid Mammoth bear the flag of a renewed and relentless doom, rejuvenating a genre that started to cannibalize itself badly. The Sabbath-worshipping unit showcase a perfect mastery and this sophomore album just put them under the spotlight. Their sound is just as pachydermic and crushing as their totem animal, while clean vocals appeal to a wider audience than their usual stoner/doom microcosm. Undoubtedly, their next record has chances to establish them as the finest of the genre. Find Acid Mammoth on Facebook.

The Athens-based trio officiates on the verge of the fuzz scene, with garage rock songwriting that is filled with enough fuzz to please desert rock fiends, conjuring the empty wilderness where self-contemplation and introspection occur seamlessly. Highlighted by crooner-like vocals at times reminiscent of Nick Cave, One Man Drop’s music can turn (lancinante), inviting you to wander in his melodic meanders, reminding another band fronted by a giant ginger. Bonus: their stellar cover of The Clash’s “Guns Of Brixton”. Find One Man Drop on Facebook.

Nature (as well as my ears) hates emptiness. Right when Unsane call it quits, I come across Krause, a band hailing from Athens whose Am Rep aesthetics have been hardly delivered these days, unless you’re called Whores. And just like the Atlanta unit, Krause use the genre’s characteristic groove-laden, saw-like bass and raspy vocals, while pushing boundaries with screeching guitars and effects that would gladly take their cue from Shellac. Their riffs fall like a deluge of punches in your face during a dodgy bar fight. Krause prove that if it hurts, well it means you’re still alive. Find Krause on Facebook.

Greece still has many secrets to unfold, so I do hope that this selection will lead you to dig further.