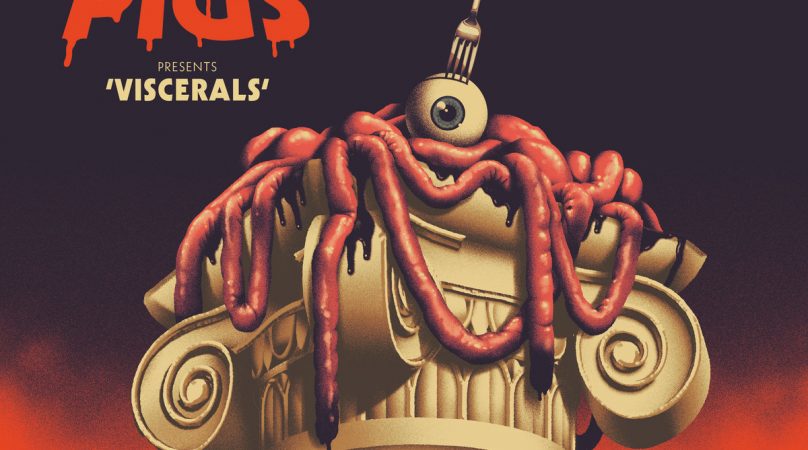 Don’t ask me why, but I always had a thing for albums kicking off with a strong and well thought-out solo drum beat, like on “Era Vulgaris” from Queens Of The Stone Age or Them Crooked Vultures’ self-titled. If it’s well-executed, the album instantly gets my vote. So obviously, when one of my favorite bands of the past few years decides to it a try, I exult. And it looks like Pigs Pigs Pigs Pigs Pigs Pigs Pigs have decided to please me with the opener for “Viscerals”.

Past this yummy intro, we find with “Reducer” all the elements that Pigs Pigs Pigs Pigs Pigs Pigs (no, I will not shorten their band name) built their hype and fame on. We find those riffs that take their cue equally from sludge, grunge and stoner without ever being too melodic, dissonant or metal-infused. We also find surreal vocals drowned in reverb and delay with an old post-punk esthetism (hello Fugazi !). We can also count on psychedelic guitars leads and a doom bridge to wrap it all up.

Everything that makes the Pigs Pigs Pigs Pigs Pigs Pigs Pigs sound is there: a mix of psychedelic sludge rock with a hint of stoner, doom and post-punk. Talking about a niche genre, right? If you struggle to imagine what it’s all about, think about the Melvins on shrooms or an adventurous and spontaneous Alice in Chains. Or the other way around, imagine a violent version of Magma or a stripped down Hawkwind. Another key element in Pigs Pigs Pigs Pigs Pigs Pigs Pigs‘ music: the rhythm changes, breaks and other joyful ways to play with asymmetrical time signatures. No intend to sound like a “math-anything” band here, but rather a will to surprise and vary without ever altering the overall sound or lose the listener.

Last but not least, one point that generates debates and arguments with Pigs Pigs Pigs Pigs Pigs Pigs Pigs: the call for a cult. It is impossible to listen to this album and not have this feeling of being either a hater or be in the know. The sonic identity of the band is so broad yet so distinctive that there’s a real cult around Pigs x 7. Is it a hipster band, almost falling into sectarianism, clearly for elitists and highly overrated? Or is this image wrongly applied to their music for being so unique and brilliantly blending tons of influences in their own sound and a clear artistic research? I already picked my side: I like all the universes clashing here, and find the end result extremely well-executed and I’m always asking for more. No doubts here: I LOVE Pigs Pigs Pigs Pigs Pigs Pigs Pigs.

With favorite tracks such as the opening “Reducer”, the doomy “New Body”, the atmospheric “Blood and Butter” (what a great intro), I ended up asking myself: am I an elitist jerk? And here’s yet another quality for Pigs Pigs Pigs Pigs Pigs Pigs Pigs: they push us to a form of introspection. That is when I realized how important the album name was: “Viscerals”.

The album hits right in our emotions center, from the most savages to the most complex. Two adjectives who fit particularly well the band as well.

Personally, I won’t listen to haters and will go back to this excellent album regularly. Maybe that’s where the truth lies. Maybe it’s even in the very opening riff of “World Crust”. If you like modern sludge rock, this song is a must hear. It’s strong, it’s as rock and roll as it gets and even if it appears as simple, it’s way more complex than one would think (listen carefully to all the work on the basslines). It gives us ALL the band has to offers without asking for anything in return. Pigs Pigs Pigs Pigs Pigs Pigs Pigs makes it very simple: love it or we won’ t like each other.