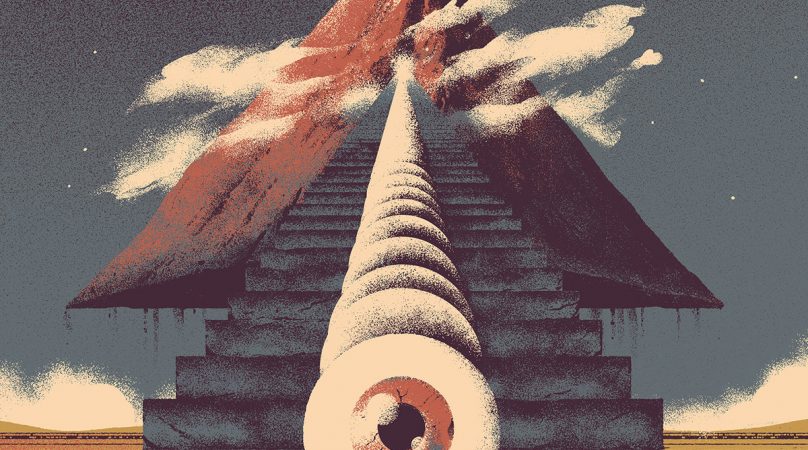 It’s been a month since BIG SCENIC NOWHERE were in my “stuff to check out/review” playlist. It’s been a month since I’ve been playing those two tracks, alone in my living room, with friends, sometimes while I was cooking or driving, here and there. But in the end, I couldn’t weigh in on it properly. Yet I felt like I had to lay words on paper. Signals kept being sent to me from the outside: my editor featuring ‘Dying On The Mountain’ as Record Of The Week, those discussion groups praising it all over the web… Or was it just the recent announcement of a debut full-length coming in 2020?

The pitch? A 2-track EP released as part of the PostWax sessions — those exclusive recordings delivered by Blues Funeral Recordings through an annual subscription system for people who are obviously comfortably off, or die-fans of involved bands. Or both. However, for this specific release, it seems that the label has bet on the supergroup hype: this is the first joint outing of 30-year friends who wanted to share more than just a few tacos at the local fast food restaurant. Big Scenic Nowhere is a collective founded by Bob Balch (Fu Manchu) and Gary Arce (Yawning Man) that includes desert legends Nick Oliveri, Mario Lalli, as well as Tony Reed, Per Wiberg, Thomas Jäger… Desert rock’s own « Ocean’s Eleven », to say the least. However, it’s hard to get over the fact that the EP is only two tracks long: a 20-minute jam and what seems to be the single. It’s not what I call consistency, actually it feels like doing the splits between both sides of the vinyl. But again, it’s just an appetizer.

So, what am I supposed to do with this record? Nowadays, who is able to immerse body and soul into a 20-minute jam without being interrupted by a phone call, a text, boiling pasta, a crying kid or the latest notification about the latest trendy release? It is hard to fully embrace and dissect pieces of music that need further listening in 2019. Immediacy at the cost of pleasure, when the content becomes obsolete as soon as it’s shared on social networks. The way we ‘consume’ music nowadays should be to blame here. I almost fell for it. While checking out the first track, it’s impossible to instantly get into it, enjoy its movements and get grasped by the electric flow of these two exceptional musicians. Just like in Yawning Man, Gary Arce draws up endless and majestic soundscapes, which Bob Balch enhances with his untamable flame, burying you under a deafening riff deluge. As if for twenty minutes, Hokusai’s « Great Wave of Kanagawa » move to the Mojave desert.

In 2019, releasing such a piece of music is a statement. Long, dense and magistral pieces just like the new Tool or Cult Of Luna. It will probably be the first review where I don’t clearly position myself. Or maybe it is only about the basics: unplug everything, turn off pasta, sit back and LISTEN. Over and over again.