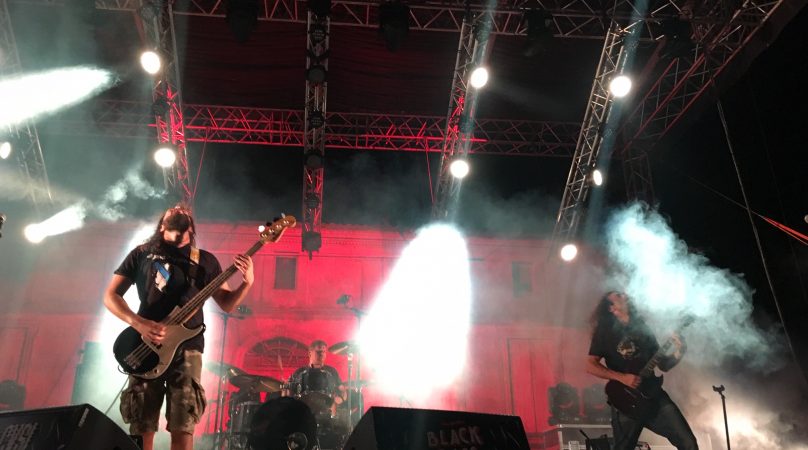 Deep in the marsh lands of Northern Gironde, east of the vineyards and tucked away from the bright lights of Bordeaux, you’ll come across the soul of heavy rock in the South West of France.

BLACK BASS FESTIVAL is an annual independent musical festival held in the tiny village of Braud-et-Saint-Louis, which is a stone’s throw from the fortified town of Blaye and around an hour’s drive from Bordeaux. The festival is run over two nights at the end of each August and really does offer an eclectic range of guitar driven music. With styles varying from foot to the floor motor rock, to rampant walls of sound, the Black Bass really does provide ear candy for a large spectrum of punters.

I was a little late in arriving for the first evening, even if I only live 20km down the road, so I unfortunately missed out on hearing Bo Ningen. However, I walked straight into the set of local Bordelais outfit, LITTLE JIMI. Playing on the secondary stage, I nestled up to watch a trio of young guys absolutely throw their bodies into their performance. Not only did they not miss a beat from their catchy psyche rock tunes, they literally threw their bodies into their work with shoulder charges, kicks and jumping on each other’s heels. It reminded me of AT THE DRIVE-IN in their film clip to ‘One Armed Scissor’. Hat’s off to you Little Jimi, you just got a new follower.

Next up was the heavy fuzz of Italian space rockers, BLACK RAINBOWS. I previously came across some of their material when flicking through public playlists. So, I was up front and centre when they came out on the main stage under the big lights. With a roar from fist pounding, string vibrating distortion I knew I would need ear plugs. With great synergy from the three members, it was one pile driver of sound after another other. Lead singer and guitarist, Gabriele Fiori, lead the charge with many groove laden guitar attacks and a lofty vocal growl. The entire set had people’s hair flying in all directions and I got beer accidentally poured all over my back…. I was fucking loving it.

After orbiting the sun with Black Rainbows, it was nice to take a break and wander around the village to soak up more of the vibe while punkers TRUCKKS slashed their way through their set. Being an independent organised festival, I couldn’t get over what a great job the volunteers did in getting the village sorted out the way they did. It felt like a medieval village made for rock lovers. From the camping grounds, to the food, drink and merch boutiques, I was extremely impressed with the professional vibe and the overall laid back atmosphere.

After a brief respite and a pint, I was cut down in mid conversation when BRUTUS from Belgium dropped the first notes of what would be an epic set. The strobe lights kicked off in the back of my mind, along with the blast beats coming from the drum riser. I felt as though Björk had flown in from Iceland, brought Cradle of Filth with her, and started paying homage to Fugazi. Brutus as a unit, was very tight rhythmically, and the sonic sounds infused with a hard-core edginess really provides the audience with a musical ‘experience’. Big ups to the singer-drummer for reaching out to the back of the house and smacking everyone in the face! It sounded as good up the back as it did down the front!

And here is where I completed my epic evening out at BLACK BASS FESTIVAL 2019. I was unable to attend the Saturday evening festivities, but with acts such as The Vintage Caravan and Lost in Kiev, one can only expect more of the same solid stuff I witnessed on Friday night. Black Bass is a wicked small to medium sized indy festival, where the focus is on the musical experience and the interactions you have with likeminded people. I popped my Black Bass cherry this year, but I’ll be back next year for sure! 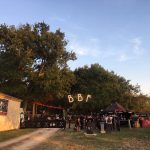 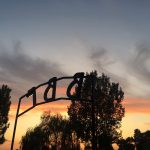 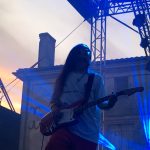 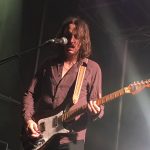 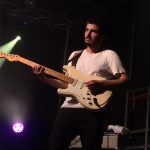 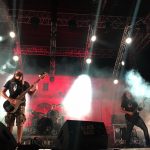 About the Author: Mikee Fos

An Australian that got lost in France over a decade ago and is a major lover of fuzz tone. From hardcore to Hawkwind, the world is a much better place with distortion.