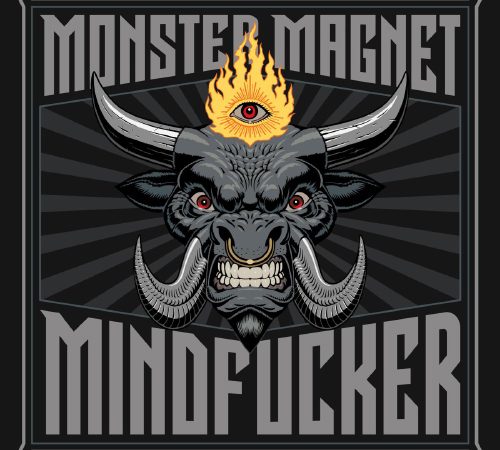 Frenzied rock veterans MONSTER MAGNET return with their eleventh album, and as a new release from the band is red-letter day, it will require all your attention instead of just a brief listening.

Staying atop of a sea of decaying bands who haven’t brought anything fresh since it got hyped, the leaders of what we can (still) call the stoner rock scene manage to stir interest with their sheer rock’n’roll outgrowth, Mindfucker. Just like Motörhead when they used to shout they were ‘playing fuckin’ rock’n’roll’ before kicking off their shows, Dave Wyndorf keeps following the path of his sonic and psychotropic influences (I mean, the latter almost made him almost kick the bucket). Mindfucker is meant to kick arses, and hell, there’s everything you can expect from a steamroller of a record on here: a huge stomp, hulkean riffs kicking like a speed rush, lusty grooves exuding debauchery, i.e the perfect, wild-as-hell MONSTER MAGNET recipe we are all craving. Well, which I am craving. What? There aren’t any endless, dope-laden psychedelic lurches? Nope. So this ain’t a stoner record? Nope, I just told you it was fucking rock’n’roll, are you deaf or what? Take those leaves off your ears  and you’ll hear things clearer… Damn you stonersloths, you should get back to basis and listen to Uncle Dave!

Let’s get back to our pills. Where we we? Oh yeah. The other aspect of Mindfucker, when you listen carefully, are them lyrics. Dave Wyndorf – who wrote as many stunning songs as he did lyrics worthy of alternative comics – managed to reconcile his desire to put out a fun rock album and current news, starting with the US elections. But unlike Al Jourgensen, who thrives on a deep hatred of politicians to produce aggressive and committed albums, the songs on Mindfucker are more poetic and with a meaning that can hardly be grasped at first sight. And like Ministry’s frontman, Wyndorf can be seen as a wild-eyed preacher standing on an empty beer case in front of a sex shop, yelling at people who couldn’t care less of a junkie’s speech came to warn them about coming disasters, and who will probably miss his target because of its subtlety. What a pity.

In the end, MONSTER MAGNET are treating us to a fantastic album blending the best of rock’n’roll with well thought-out lyrics, spiced with the stunning Hawkwind cover, “Ejection”. Real will recognize real and have a blast. Sorry for doubting.