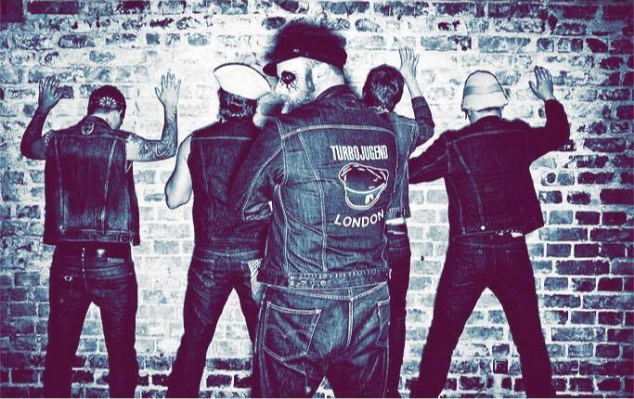 The verdict was incontrovertible among the community after the final announcement was made a few weeks ago: the sixth edition of DESERTFEST LONDON is set to offer the best lineup hands down, since the heavy festival settled in Camden in 2012. The full running order is now in all hands, so your most fervent Desertfesters – Pete Green and yours truly – thought of the most hesitant of you and provided this compendious, chronological guide to this year’s party. Check out our 10 unmissable acts of this Desertfest London 2017 now.

DEATH ALLEY – We here at THC have three little words for you today and always: Black. Magick. Boogieland. Seriously, what an album! The very moment Dutch destroyers Death Alley burst in to our subconscious, we were hooked for life on their blustering riffery, outrageous bass grooves and Douwe Truijens’ helter skelter yelpering from behind the mic. Since the humble launch of that record, these Alley cats have gone on to dominate stages across Europe and even recorded a Live at Roadburn performance that brought many to tears. It’s hard rock, funk, blues, proto metal and a whole lotta fun down in Death Alley so let’s join the Supernatural Predators and get the party started deep in the bowels of the Underworld on Friday night! – Friday, 4.30pm at The Underworld

LOWRIDER – Reminiscences of a great Desertfest 2013 vintage: this superfuzzy edition (oh hey Unida, Fatso Jetson, Truckfighters, Yawning Man!) was the first we attended with the THC crew… With the exception of a memorable misdemeanor at London’s Garage in the winter of 2014, plus a dust-settlin’ performance at Hellfest the same year, Kyuss’ Swedish heirs have made themselves so scarce that we may be a bit keyed-up when heading to the Ballroom for their show on the Friday night. Right before desert rock masters Slo Burn, if it’s not a sign that one HELL of a feverish night awaits, you guys. Come and celebrate the sandy, blazing hot anthems taken off their only full-length and all-time classic “Ode To Io” (damn, 17 years!). You know what to do. – Friday, 8.15pm at The Electric Ballroom

THE PICTUREBOOKS – Back in 2014, we were praising the German duo to the skies with PR-worthy tag lines such as “one of the best kept secrets of the alternative rock scene”. So, every time the opportunity of seeing them on a stage knocked, you were sure to find us on the front row. We even interviewed these lovely fellas. Revealed through their brilliant third album “Imaginary Horse” on Riding Easy, these two motorcycle addicts couldn’t give a better meaning to the “garage rock” appellation, thanks to their ritual-sounding songwriting and organic recording approach. Their electric, bluesy incantations may surprise you at first… and will win you over for sure. Arrive early enough at the Underworld on Friday evening if you don’t wanna miss ’em! – Friday, 8.45pm at The Underworld

BRUME – Despite having a rather bristly name, you certainly won’t want to be brushed aside as we cram into the Underworld’s lowly confines together to experience Californian heavyweights Brume for the very first time in the UK. With a sound that evokes the weighty, yet emotionally circling refrains of Windhand or Acid King, Susie McMullan takes centre stage with her cavernous, yet elegant vocal interplay. Many London regulars will also recognise a familiar face on the six-strings as former Gurt axe-ist Jamie McCathie drives the Brume riff machine after his move to San Francisco earlier in the decade. Don’t expect a party, unless it’s an ‘I’ve Just Crapped My Pants’ party, as you get ready to doom with Brume in Camden. – Saturday, 3.00pm at The Underworld

INTER ARMA – Progressive, expansive, blackened, texturing, otherworldly, dominating, pioneering, timeless. No, we’re not trying to describe the beer collection behind the bar at the Black Heart; we’re talking about the Richmond, Virginia goliaths. From the very first seconds we at THC extracted the painful, eeping beauty of ‘Sky Burial’ into our craniums to the last lingering moments of the frankly jaw-tumbling ‘Paradise Gallows’, we’ve been hooked on the raw talent, the brute force and the scarcely believable sophistication of this five-headed monolith of heavy music. Technical and abject doom-clawing on the one hand, delicate and intricate pathway-finding on the other, it’s going to be a privilege to behold these masters of blackened interstellar sludge do their worst to us. Be there. – Saturday, 6.10pm at The Underworld

TURBONEGRO – What’s the most fun you can have with your clothes on? What’s the most fun you can have with your clothes off? The answer to both of these eternal questions is surely: Turbonegro. In a move that’s certain to go down in history as the best Desertfest decision ever, the Norwegian legends are headlining the Ballroom on Saturday night in Camden armed with the finest deathpunk back catalogue in existence. Tony Sylvester will lead the romp through the likes of ‘All My Friends Are Dead’, ‘The Age of Pamparius’ and of course the elevating anthem of sensibility that is ‘I Got Erection’. I’ll scream, you’ll scream, we’ll all scream for those speed-demon riffs, those luscious licks and those filth-strewn hooks. Get It On? Don’t mind if I do! – Saturday, 8.30pm at The Electric Ballroom

BONGZILLA – Fourteen f-ing years without setting foot in London… The Wisconsin riffsters definitely have to make up for time lost with their British fans. And because you wouldn’t want to miss John Garcia and Turbonegro on the Saturday (would you?), our lovely promoters did the math and invited Mike “Muleboy” Makela and his weedy gang to perform not one, but TWO sets during the weekend. After a couple of hangover/breakfast ales, start your day under the Roundhouse’s mighty dome and become one in the thick, green fog formed by “Grim Reefer”, “Keefmaster”, “Witch Weed”… and probably a few exclusives as the long-awaited follow-up to Amerijuanican should be released this year. Seeing this sumptuous venue filled with 3,000 headbangers hailing the power of the bong like one man, this is something we won’t miss (otherwise, why would we be called THC?). Go. For. It. – Sunday, 3.15pm at The Roundhouse

BOSS KELOID – There is something highly addictive in Boss K’s music (not to be mistaken for fellow Englishmen and post-metallers Bossk). Whether it’s that warm, tar-like, engulfing tone, or the irresistible swagger that oozes from Their Sludgyness, the Black Bow Records protégés have marked 2016 with a strong second album cheekily entitled “Herb Your Enthusiasm”. Ah yeah! Highly enthusiastic we are, looking forward to enjoying the unrivaled feeling of being run over by such a groovy steamroller. Third band on the Black Heart’s bill on the Sunday, this close and intense encounter of the third kind may imply ‘just a couple of beers’ in order to fill our hungover corpses with some hoppy strength – and get ready for the Bongzilla-Candlemass-Sleep sledgehammer that will follow, but that’s another story. Sunday Doomy Sunday, baby! – Sunday, 4.15pm at The Black Heart

CHUBBY THUNDEROUS BAD KUSH MASTERS – Everyone’s favourite earth hogs have quickly gone from being just another band with a silly, drug-addled name to one of the UK’s finest riff-fired trios. From that delicious Bongzilla-esque crunch to those grooves as bouncy as Clutch and Red Fang encased in jelly, the Chubsters are a live package not to be missed. And that’s before we’ve even got onto the tie-dye tees, clown corpsepaint and the bubbles. Yes, that’s right, sludge bubbles. After the devastating amounts of party moshing inflicted via their 2015 debut record, we’re snaffling at the trough to hear what will come next from the Bad Kush Masters. Pop along to the Underworld on Sunday and you might even get some sneak previews. – Sunday, 8.30pm at The Black Heart

SAMSARA BLUES EXPERIMENT – Over the years, Desertfest has struck a chord with the looniest of us all, by hosting some top-flight psych rock acts. No one will disagree when we say that SBE is one of the most remarkable bands to be gracefully flying over the scene, masterfully fusing stoner rock, Hendrix-inspired blues and Indian raga. So when the most pessimistic predict that cannibalism has started spreading among our heavy lands, the German trio remain the cream of the crop, established as pioneers of a genre they are still the only ones to master. With a smooth takeoff from the Underworld basement, the Berliners are set to send you straight to Heaven, on that last night of the festival… – Sunday, 10.30pm at The Underworld