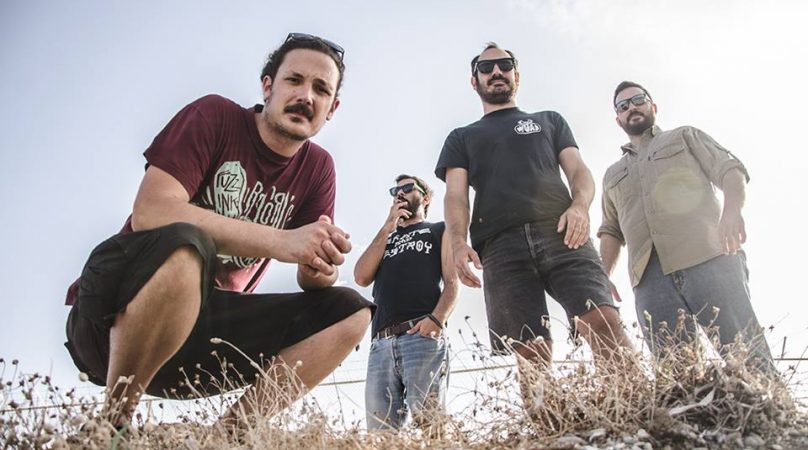 When your debut record is produced by Billy Anderson (Neurosis, Sleep, Melvins) and reaches cult status in the stoner rock scene, how do you move on? Hailing from the small village of Chiliomodi in Greece, the four childhood friends forming 1000MODS kept their heads cool. Their recipe for enduring success: keep doing what you do well, but work hard on it until you can do it better. THC sat down with drummer Labros to talk about their influences, the creative process behind their latest (killer) album and the emergence of the stoner Greek scene.

How has been the reception for your new album “Repeated exposure to…” so far?

Labros (drums): Very good, better than we expected. We knew the album was good, but it went far better.

In terms of songwriting and production, we can definitely feel that a lot more work has been put into this album. How long did the recording process take?

Labros: Three and a half months total. This time we had our own studio, with more equipment. We tried to produce this album differently than the previous ones, which were all recorded live in one room. We already had some of the songs ready, so with the time we had we focused on refining every detail, more than on the previous records. But in the end, it’s still us!

Are the new songs trickier to play live? A lot of work has been put on dynamics, which in my opinion have been pretty cleverly thought.

Labros: Thank you! We’ve been practicing a lot before the tour, but we also play songs that we already know so it feels quite natural. To the contrary, a song like “Into The Spell” is a song that needs a big set, the whole stage has to be yours so you can set up all effects and gear in a particular way.

1000Mods have been together for ten years now. How do you manage not to massacre each other while on tour?

Labros: This band wouldn’t be the same with different members. We try to find ways to stay cool, we’ve been friends for twenty or twenty-five years, so it’s easy.

What do you guys listen to when you want to get your mind off rehearsals or writing music?

Labros: We run Youtube marathons on our laptop and stuff. During recordings, we were listening to a lot of Tool and bands from the Seattle grunge era. And of course, the usual Sabbath… (laughs)

Some of you may also be into punk and garage music. It really shows! When many stoner bands are all about “peace and love”, you guys seem to be a bit more mean and angry…

Labros: Hmm, probably… We want our music to be a fun experience for the listener and ourselves.

Let’s talk about your motherland Greece now. From the outside, we recently saw a couple of stoner/fuzzy festivals blossoming in the country. Did the genre just really broke through there, or has it nurtured in the underground over the years ?

Labros: Of course, it’s not a recent thing. It started around 2006-2007 with many underground bands like Planet Of Zeus or Nightstalker… Between 2007 and 2011, there were many good bands, recordings and gigs coming up. From 2012, there was an explosion with a LOT of young people getting into this genre.  For example, 1000Mods played a headline show with Planet Of Zeus and Nightstalker in front of 2,500 people there. I don’t think we could have gathered such a crowd elsewhere!

This is probably why major events such as Desertfest have recently settled in Athens. How do you see the future for the Greek heavy rock scene?

Labros: The whole economic crisis dramatically changed young people’s way of having fun. Ten years ago, electronic music was the main thing, it was like a placebo: people thought having fun was synonymous of spending a lot of money. It wasn’t true. Since then, people have started attending rock gigs, forming bands and the Greek scene got bigger. It has a really positive impact on underground music, actually.

Was Nightstalker an inspiration for you as a band?

Labros: We loved rock music since we were kids, but they became an inspiration when we started playing music in high school. For me, Use is one of the best stoner rock albums of the ’90s. At that time, Kyuss were getting really big and it felt good to have a band like this in Greece.

Any new up and coming Greek bands you would like to recommend to our readers?

Labros: You may already know Naxatras. Also Godsleep, really good friends of ours who play a heavier, sludgier kind of rock. In the more post-rock field, there is we.own.the.sky… There are a lot of bands now, even outside of the strict stoner rock scene, like heavier or more garage psych stuff.

How do you envision the future for 1000Mods? Are you guys up for ten more years?

Labros: Every time we’ve looked too far into the future, not much happened. Right now, we’re focusing on the next six months or so. It works well for us, so this is how we’re gonna do it!