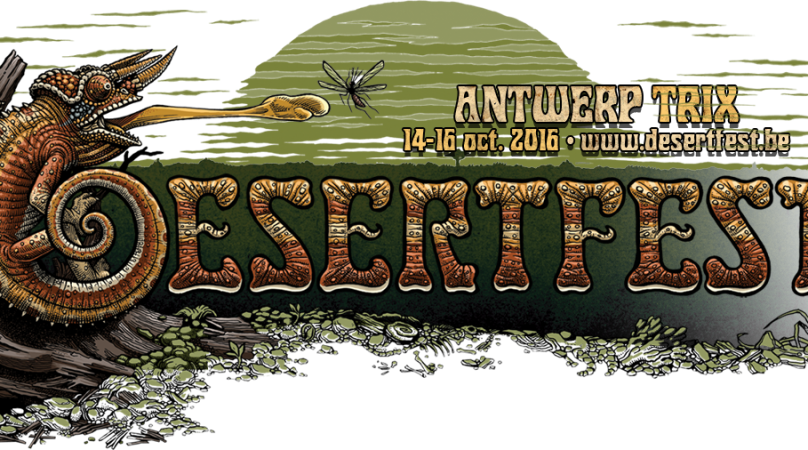 For the third running year, DESERTFEST BELGIUM rustled up a super solid lineup, establishing its position on the huge European chessboard of stoner/doom/psych events. So many great bands on the same bill is nothing but mouth-watering, but we all know that too many options can also lead to frantic rushes from one stage to another, spilled beer and frustration. No worries, friends: the THC team is here to guide you in your quest to the perfect heavy bliss. (Words by Sylvain Golvet & Antoine Ebel)

Friday is usually warm-up day, yet it is far from being stingy with exciting acts. We’re particularly looking forward to seeing the brutal but cathartic performance of BLACK COBRA, Italian riff-mongers BLACK RAINBOWS, as well as Salt Lake City’s post-sludge/doom mormons SUBROSA and their hypnotic violins (who got us mind blown on their latest effort For This We Fought The Battle Of Ages).

On the headliner side of things, TORCHE have ways and means to knock us out the proper way, while longed-for heavy lumberjacks RED FANG will have to defend their fourth album and prove that continuous success also rhymes with quality (I trust them for that). Obviously, we could do with our doom favorite YOB and their epic steamrollers. If you’re not ready for such heaviness, then go for COOGANS BLUFF, a twirling psyche rock five piece… with brass instruments!

As expected, Saturday will be a complete logjam of unmissable acts. Needless to say that it is be inconceivable to skip ELDER, PENTAGRAM or GRAVEYARD (edit: since the band has split a couple of weeks ago, they have been replaced by the mighty COLOUR HAZE). However, some differently interesting things will be happening with occult stoners SALEM’S POT, who recently released another beast of an album on RidingEasy Records and proved to have a real shape-shifting talent. ELECTRIC CITIZEN will be also worth a look, given the Californian label’s nose when it comes to unearthing rad bands.

For those who’d rather see European acts, Greek heavy rockers 1000MODS are a must-see (even if they still don’t manage to transpose the same energy on stage). A psychedelic journey awaits with PURSON and their mind-blowing vocalist, while THE ATOMIC BITCHWAX will summon the golden age of punk and rock’n’roll. The WEEDEATER circus will settle at Trix to present their famous sludge act, featuring a juggling drummer and a mic swallower / bass player. Also, do yourself a favor and don’t miss MONKEY3. Their new album is more progressive than ever, and it’s nothing compared to the amounts of heaviness they deploy on stage.

Sundays, bloody Sundays… That moment when you barely start getting into the swing of DESERTFEST, to the point it has become your reality. Heavy riffage, beer, old and new friends, day after day? Please, keep it coming. Unfortunately, good things always come to an end, so why not making the most of this last day to get your fill of good vibes now? Lucky you: there’s plenty.

Dutch sludge/stoner rockers KOMATSU and Belgian metallers BLACK SWARM will take care of sending a few trunks in your face. Their restless singer seems to share the same passion for bare chest performances, just as Iggy Pop – too bad for him, he doesn’t quite have the same six pack. In a more subtle but just as catchy vein, LONELY KAMEL will make your booty shake with their heavy blues anthems (highly recommended after all the Belgian fries and beer…).

Now that your chakras are wide open (“smashed open with a crowbar” would be more appropriate), you’re in for the Eastern-sounding trip offered by the pillars, bosses, godfathers: MY SLEEPING KARMA. They may not be reinventing themselves a lot, but their live shows remain an absolute must. In the psychedelic department, we recommend a truly original act: DORRE. Originally formed as a jam band barely playing a gig a year, the band has been addicted to long songs blending doom, noise, blues and stoner rock. Which can feel awesome or stodgy, depending on your mood. Finally, it may almost seem superfluous but… just lend an ear on the day’s headliners. Feathery Swedish GOAT and their afro-psyche-funky rocks are totally weird and totally essential, while the rising stars of the stoner/doom scene and oh-so-Sabbathy UNCLE ACID & THE DEADBEATS (also known for their morbid obsessions and deranged concept albums) will deliver a quality show to wrap up an already perfect Desertfest 2016.