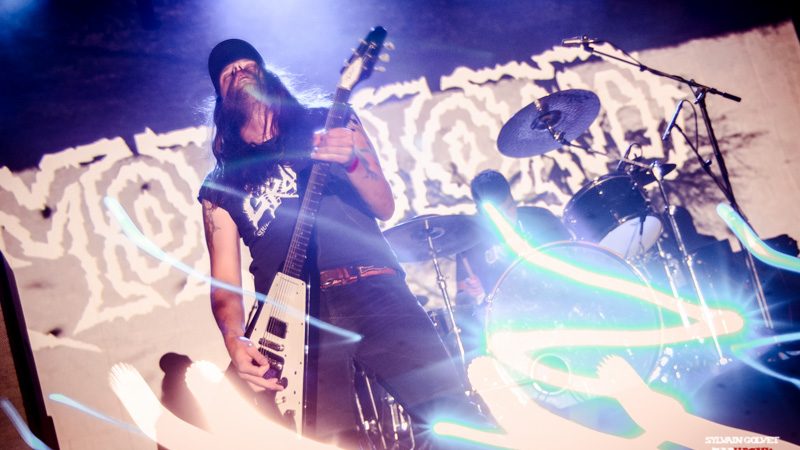 The DESERTFEST. This now biannual gathering of stoners from Europe and beyond, that takes on the form of a huge riff holiday camp – just as much as Hellfest – whereas one of its defining feature is to be an indoor fest. So it’s once again at Antwerpen’s Trix that the Fuzz family is taking up residence this October, for three days of headbanging, space odysseys and limitless fun. Looking back on the first day of Desertfest Belgium 2015, with a special feature written by our friends Monolord. (PHOTOS: Sylvain Golvet)

After a rather wild warm-up night at Antwerp Music City, where it was mostly about catching up with friends than making actual music discoveries, I’m all fresh and ready to roll on this Friday afternoon. And I won’t make no bones about it: I’m REALLY happy to be here – but who isn’t?. The idea of being in semi-autarky here for three days, where nothing else exists than the Holy Riff, Beer and Friends (as well as 4-star rooms at Scandic Hotel), always feels like living the dream. And the dream comes true at about 6pm at Antwerpen’s Trix. Greek rockers PLANET OF ZEUS are opening the festival on the Vulture Stage (the smaller stage at ground floor). Being slightly busy coordinating a few things here and there, I’m missing the whole gig. Anyhow, I was told they sound like Clutch performing at the local pub. Which can be nothing but cool, right? The band I was looking forward to seeing the most on this first day is none other than new Swedish Kings of Doom – or more simply new Kings of Doom – MONOLORD. 7 pm and I’m still at the press area when their show kicks off, so I hurtle down the stairs to the main stage called “Desert Stage” on ground floor. It takes them only three (long) songs to crush our necks into a real mass orgasmo. Sound: Dantean. Charisma: tremendous. Doom charge: maximum. Damn, they just knocked us up for a loop! Also, I wasn’t expecting such an outpouring of love from the audience, especially when Thomas V Jäger (vocals/guitar) gets closer to stand on the security barrier. Given the people’s reaction, it is obvious that they found their new doom idols in MONOLORD. The Mass reaches its climax when the first notes of their ultimate classic “Empress Rising” resound… Seriously guys, this song has everything to become the doom anthem of the 2010’s. Really. But let’s give the floor to the band themselves, who were lovely enough to tell us about their own experience here:

“This is the short and concentrated festival report from 3+1 stooges’ few hours at the festival, on the way home from our last gig of our European tour, which happened to be Desertfest Belgium. After nine days of driving through seven countries, we arrived at Trix, slightly out of energy. But as soon as we started to unload, the fast and friendly Desertfest crew welcomed us in the warmest way possible. Straight into a loud and smooth soundcheck, and on to brilliant vegetarian catering where we calmly ate ourselves to death. Being received that way is a welcomed bonus, everytime. After resurrection from the food coma, we entered the Desert Stage. And what a crowd. To those of you who where there and is reading this now, you are fantastic people. You made the gig. It’s always fun to be on stage, but it’s not always you get a chill from the thrill of it. Those extremely short 45 minutes went by way too fast, but we intensely enjoyed every second of it. Winding down after a gig like that is like trying to fall asleep after inhaling 10 shots of espresso, so we strolled in the direction of chilli mojitos and met a few of our supportive fans along the way. Unfortunately, we had to leave early because of the 14 hour drive home, which is happening when this is being written. But the very few hours we had at Desertfest was one of the brightest highligts of the Monolord Over Europe tour.” Esben, Thomas & Mika – MONOLORD

I’m now heading to the Canyon Stage upstairs, to face quite a solid attendance for Rotterdam’s stoner sons THE MACHINE. Speaking of heat, I’m not sure if it’s either about their aged spiced rum-filled grooves, or the fact that their bassist Hans is – as usual – playing in his socks, but we’re quickly forgetting about the chilly weather and our minds are immediately transported under Sky Valley’s starry summer sky. Their feverish stoner rock subtly worms itself into our bodies, to explode into a big bang of mighty fuzz and heaviness, leaving us absolutely overjoyed. After such a party, how could you not want to share a beer with these lads? Once again, being able to hang out with bands is part of the Desertfest magic. The crowd empties out the Canyon, most people head to the gardens aka the “Food Corner” while I’m coming across some press fellows there. In less time than it takes to say “doom”, we catch the Monolord guys for a spicy mojito. (Allow me a digression about the famous Cuban stall. I think it was unofficially elected #1 spot of the festival by the crowd. Who didn’t give in to one of their delicious mojitos? Who didn’t shake their booty on the Chief’s salsa while winking at the pretty barmaid? Come oooon, cast the first stone).

Now is the time to get kicked in the ass by STONED JESUS. The Kiev trio is on the right track while I reach the Canyon Stage’s front row, which is – as expected – packed as hell. As usual, our Eastern princes showcase this incomparable ardor of theirs, being just as ardent as their new album “The Harvest”, a way less stoner/psych and much more ballsy and straightforward rock delivery. Song after song, the band relentlessly delights a very lively crowd, whom is definitely looking for some action with a capital A… to such an extent that my face brutally meets a monitor. Well at least, I’m glad to see people haven’t waited until the Sunday to warm up! I won’t see much of the next gigs except for the magnificent performance of DOZER on the main stage. Dozer is a pioneer band of the Swedish stoner/heavy rock scene, in the manner of Lowrider (who are good friends of theirs). With a stunning ease, the band gives us an unvarnished lesson of ROCK, involving virtuosity, heaviness and… goosebumps. Simple: they embody the perfect stoner rock band, like a boozed-up scrapper version of Kyuss knocking us out with their grooves, with Tommi Holappa putting on mind-expanding and sharp-like-steel solos, while Fredrik Nordin’s vocals are the roaring engine of it all. This is one hell of a first headliner the Antwerpen promoters are offering us here, and the best way to start off the weekend! The set ends on the über heavy “Rings Of Saturn” (the bonus track off their second LP Madre de Dios), just to show us who the bosses are tonight. After such a frantic ride in the desert, Desertfesters have no other option than slake their thirst… Time to go upstairs and enjoy the DJ sets while chatting with the Dozer/Greenleaf crew (they share at least one member, so it’s really like one big crew in the end). A few wheat beers later, we head back to Scandic Hotel to catch an episode of cop comedy show “TJ Hooker” on Belgian TV, then off to bed. The weekend has only started…