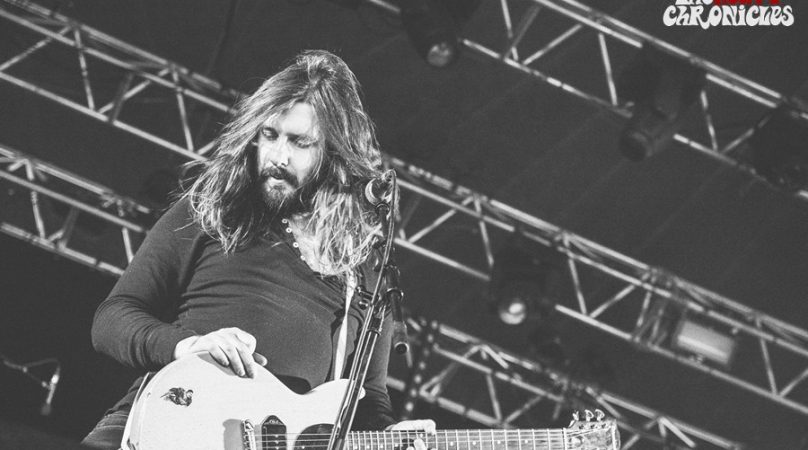 We were getting all excited about our encounter with UNCLE ACID & THE DEADBEATS in Paris, one of the most peculiar yet popular bands in the European stoner/doom scene, who are just about to release their excellent third full-length The Night Creeper on Rise Above Records. Yet, due to a slight miscommunication with their staff, our plans fell through… It is thus in writing that we interacted with the British occult rock foursome’s singer/lead guitarist/songwriter/mastermind Kevin R. Starrs, who answered our questions quite zealously. Uncle Acid unveils himself the best when he’s shrouded in a bit of mystery! (Cover photo: Gaël Mathieu)

Let’s talk a bit about The Night Creeper album first! There’s a story behind each of your records: a long-lost horror movie (Blood Lust), a mysterious cult (Mind Control)… What it is this time, and what got you in that direction?

Its a sensationalised story of a serial killer thats been created by the press to cover up murders carried out by a police officer. It’s a character that will sell a large number of newspapers and lead to an increase in police budgets. All this is going on and they think they’re getting away with it until the very end. I was watching a lot of Film Noir which kind of gave me visual inspiration for what I wanted to do with the album.

Blood Lust was very energetic and groovy. Mind Control was more slowed down, stretched out – and The Night Creeper is even more so. Are you consciously evolving towards a heavier, darker music?

It’s a natural progression. The songs just came out that way.

I feel like the whole LP is building up to “Slow Death”, the longest and (in my view) most carefully arranged track on the album. It this the way you wanted it? Can you tell us a bit more about that song?

It’s the Night Creeper finally getting killed off in a slow, torturous manner. Someone has been watching him carrying out all these killings and decides its time to get rid of him. As for the recording, we initially recorded the basic rhythm tracks for that one, and it sounded really sparse. I wasn’t sure if it was going to work at all but I ended up going to town with it and really started building it up. The more I listened to it, the more ideas I had on where to take it. That’s the advantage of being able to take the songs away from the studio and listen to them over the space of a couple of months. It gives you the time to really listen and figure out how to best serve the song. As the song builds up towards the end, it becomes louder and more intense and theres quite a lot of improvisation with all kinds of reverse effects and oscillation. I also started hearing these strange, quiet melodies at the end which I have no idea how they got there. I kept soloing each track separately and couldn’t figure out where it was coming from. It must have something to do with all the frequencies and guitar sounds crossing together but it’s quite eerie if you can hear it.

I loved the music as a whole but I must say, the lead guitar work particularly blew my mind. Is this something you’ve tried to develop further this time around?

Thanks! I didn’t really notice before but a couple of people have mentioned that now. It wasn’t really planned. Although I sing, I’m really more interested in guitar playing. I grew up listening to Van Halen and Hendrix and people like that so I love a good guitar solo! “How would you sum up your music in just one word ?” “Psychotic.”

You headed for a pretty huge US tour, the longest in your career so far. Are you scared, are you excited about it? Does it make you feel like the Beatles, about to take over America?

Yeah, we’re excited. It’s been a while since we’ve played live so it feels like we have something to prove all over again.

You managed to keep a certain mystery around the band. Do you think you’ll be able to maintain that, with the growing exposure that you guys get?

I think so. There are only so many things that I’m willing to do in regards to promotion so I think information about us will always remain pretty sparse.

I believe that so far, the songwriting had been almost exclusively done by you. As you grow together as a band, do you let the other musicians give more input?

When I have a complete vision from the start of a project on how I want it to turn out, I find its difficult for me to make compromises on that. When you write with others there are always compromises that need to be made. Saying that though, I co-wrote the song “Night Creeper” with our former bass player Dean Millar. He gave me the freedom to do whatever I wanted with the track and it worked out really well.

A show at Madison Square Garden would be nice!

Here in France, we have little stoner/doom scenes mushrooming all across the country, and I believe it’s the same around most of Europe. Has the virus spread to your hometown, Cambridge, as well?

Not that I know of. I had to leave Cambridge just to find the musicians for this band!

To end this interview: how would you sum up your music in just one word ?

“The Night Creeper” – Out September 4th on Rise Above Records
On European tour this fall with Spiders.