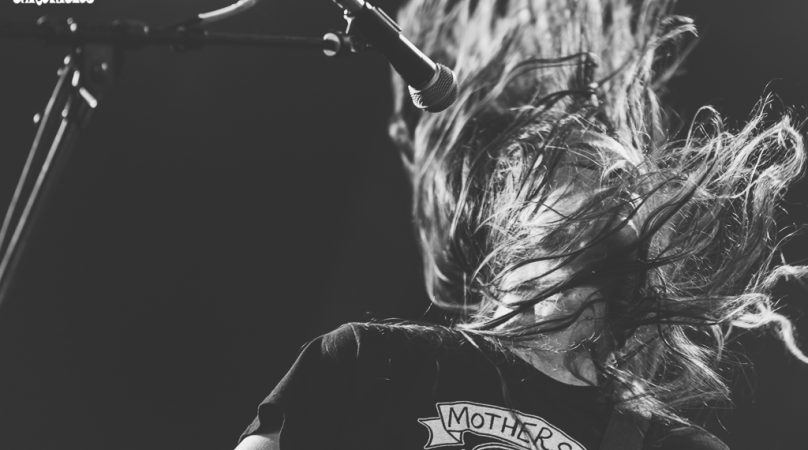 Within the past ten years, few are the emerging bands who have been praised as ardently as New Bedford, MA based heavy psych trio ELDER. They were all in their late teens when Nick DiSalvo, Matt Couto and Jack Donovan formed the band in 2006, the three of them driven by a simple desire of creating, and sharing some good vibes together. With three tentacularly heavy full-lengths under their belt, ELDER have kept revealing high standards when crafting songs, as well as a boundary-free creativity that has quickly raised them as one of the most respected bands in the heavy/psych rock scene. When we thought things couldn’t get more epic than their 2011’s absolute classic “Dead Roots Stirring”, the band got us mind-blown with their mesmerizingly progressive new offering “Lore” (reviewed here). So when the trio was confirmed to play Hellfest this June, I realized I would have this utterly creative and talented outfit right on my doorstep, and couldn’t miss the opportunity to have a quick chat with them. Naturally, that’s a serene and joyous band of dudes I met, only a few hours after their blazing performance on the Valley Stage… (PHOTOS : Gaël Mathieu)

Today at Hellfest was the first show of the whole European tour, and you played in front of quite a packed crowd on the Valley Stage, although it was only 11:30 in the morning. How did it feel?

Nick Di Salvo (guitar & vocals): It was a strange beginning, because when we arrived at the airport, my guitar was broken and it’s the biggest show of the tour, also probably the biggest we’ve ever played. Usually, we play 1,000 to 2,000 people, and then we just played 7,000 people there… It was a trip, it’s been really great. We didn’t know much about Hellfest and the atmosphere is totally cool, lots of friendly people…

Have you ever played such big festivals in the US before?

Nick: Festivals like these might exist in the US, but we never go to them, let alone play them. The festival culture in Europe is a very different thing, too. A lot more enjoyable, I guess. Roadburn is the closest thing to this we played, but it’s still really different, it’s not in a contained area, but lots of different venues in the city.

Jack: We played SXSW, it’s not really a festival, but it’s more spread out with tons of shows. It’s also a lot more strict and corporate. Whereas here, you can mingle and all that stuff.

Nick: We are a small band, we usually don’t play crowds like that.

Matt Couto (drums): This is easily the biggest scene I’ve ever been too as a concert-goer… It’s crazy to play at 11:40 and have the biggest crowd of our lives. I usually don’t wake up until like 2pm! (laughs) I was blown away.

Do you think the release of your new album “Lore” has contributed to draw all these people to your shows? You seemed to have reached a new step in many ways this year.

Nick: I didn’t anticipate this many people liking the album as they did. I thought we had a fanbase and the album was kind of different from what we’ve done before, and I thought that many people would be turned off by that. But it seems it’s been more accessible, it’s definitely propelled us to longer tours, bigger shows… You know, we make music because we enjoy it. It’s an added benefit if people like it. “If you gotta be somewhere, it’s good to be in the metal community, I guess.”

From what I’ve seen, the core of your fanbase is mostly made of people who know their music and love it with sheer passion. People who like getting deeply into the sound… Deep people!

Nick: I like to think so! We need passionate and interesting people in our fans, and I’ve found we have a lot in common with these people, when talking to them. Musical interests very broad, not just there to get drunk and bang their heads.

Jack: I think it’s a band for musicians. Like Steely Dan, or something… The songwriting is good to a point where people who just enjoy different kinds of music come out to see us. Blending the genres is a fun thing to do.

Nick: Sometimes I think, I’d almost prefer to move away from playing just metal festivals, because I don’t consider us as a metal band. It’s nice to see a wider array of genres. Metalheads can be very narrow-minded, but they can also be the most open-minded and interesting, educated and cool people. If you gotta be somewhere, it’s good to be in the metal community, I guess.

Hasn’t it felt weird to be considered as part of the stoner rock scene too? Because you’ve been literally integrated to it by the people in this scene.

Jack: It’s not weird, we kind of started out with those roots.

Nick: It was never a band that was formed to play a certain genre of music, it’s just three friends jamming together, and whatever happens happens. We started out playing stoner rock, and then naturally evolved.

Jack: The first album is more doomy and stoner rock, for sure, then on the next one, you can see that the lighter and psychier stuff started getting involved more, and the newest album is extremely progressive and a kind of blend of everything. It’s turned into something new and nice.

“We do want to challenge ourselves, every album we want to play a little better, a little bit different, we want to do more intricate things and push ourselves.”

What has influenced this evolution in your sound? Is it something related to your personal lifes, or did you make it evolve knowingly?

Nick: Ah! As a primary songwriter, the main thing that influences the music I write is: every year you grow older, listen to new music, experience things. You grow as a person and it makes sense to me that your creative output is going to grow with that too. A lot of bands don’t change a lot, and that’s fine. We write songs and just discard them when they’re not reflecting where we are at a point in our lives. Also, we do want to challenge ourselves, every album we want to play a little better, a little bit different, we want to do more intricate things and push ourselves. I want every new album to be more interesting and diverse than the last one.

Nick: It is! But we’re not playing music to sell records and make money. We make music because we’re creative people, and it’s fun. And we’re having the more fun when we’re really pleased with the output.

Jack: I think we’d be doing the same stuff if we were just rehearsing for ourselves. It’s nice that people appreciate it, but it’s for mostly the music that’s fun to play for us.

As you just said, you’ve been constantly evolving as a band and I think this album has set the bar really high, and the people liked it so much, that they’ll probably expect even more from the next album.

Nick: You know, we may just listen to Brian Eno and krautrock and make a record like that…

Jack: I think it’s going to be bluegrass, that’s what we’re getting into, really! Or we might phase Matt out of the band and get a drum machine on the next record. (laughs)

Nick: We’re already writing new music and yeah, in my mind, if you listen to our records from the self-titled one to Lore, it makes sense and I think the next album will follow the trajectory and may be more complex. You know, less metal, more melodic or something… Who knows? We listen to doom, stoner, classic and prog rock… When we write a song, we call upon this library of ideas and see what fits. That’s why it always end being like a big mish-mash of a lot of sounds. Integrating them, fitting them all together esthetically is the big challenge.

To end this interview, I’d just like you guys to quote the artist or record you’re the more into at the moment. Shoot.

Nick: 2015 has been a great year so far for me, and this Swedish band called Anekdoten. Really mellotron-heavy, they seem like Elder in an alternate universe. I feel like I understand how they write their songs, they’re not afraid to experiment, and not really metal. Very beautiful and moving music. I can’t get my headphones off their new album Until All The Ghosts Are Gone.

Matt: Weedpecker from Poland. We played our first European tour with them, and hung out the whole time… If you listen to them, it’s music that all three of us can really get into. We’re on the same page, really.