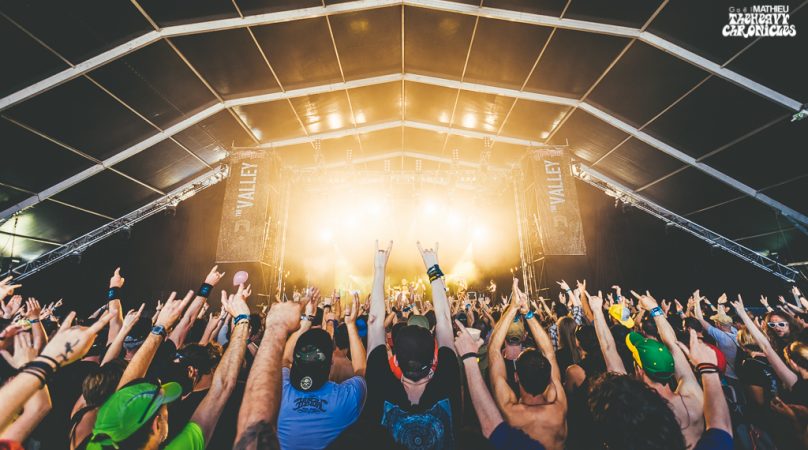 With a 2014 edition that broke records, we were far from imagining that this 10th HELLFEST anniversary was about to blow our minds like it did. A killer lineup? Yes. A metal fun fair scenery? Yes. An unequalled friendly atmosphere? Again, hell fucking yes. As always, the THC team mostly hung out at the Valley, yet we also saw lots of other cool stuff during this cracking weekend of summer solstice. But for now, let’s talk about a solid first day with the likes of MASTODON, HIGH ON FIRE, ORCHID, THE MIDNIGHT GHOST TRAIN, SAMSARA BLUES EXPERIMENT, as well as hectoliters of beer. (PHOTOS: Gaël Mathieu)

After a quite busy Thursday night spent drinking and catching up with our fellow French promoters – an activity we call prendre l’apéro, which usually lasts the whole weekend as far as we’re concerned – getting some sleep is quite impossible at the White Camp. Did you know? Thursday nights at Hellfest are the closest thing to pagan orgies, when festival-goers are still as fresh as daisies. Once apéro is set free (if you went to Hellfest at least once in your life, then you know what “libérez l’apérooooooooo” means), don’t expect falling asleep before 7am… Which is shower time, for the tidiest of us.

Friday morning, 10am. I’m part of the happy few to enter the site before everyone else and discover the fantastic 2015 setup. What with last year’s reached new heights of grandeur with the Ferris wheel and Mad Max-like scenery, this year, the promoters took it to a whole new level with skateboarding pipelines, giant bones here and there, twice more bars, grass as far as the eye can see, Main Stages adorned with some new school rock’n’roll art, and the Valley, Altar and Temple Stages of the size of airplane sheds. CRAZY. 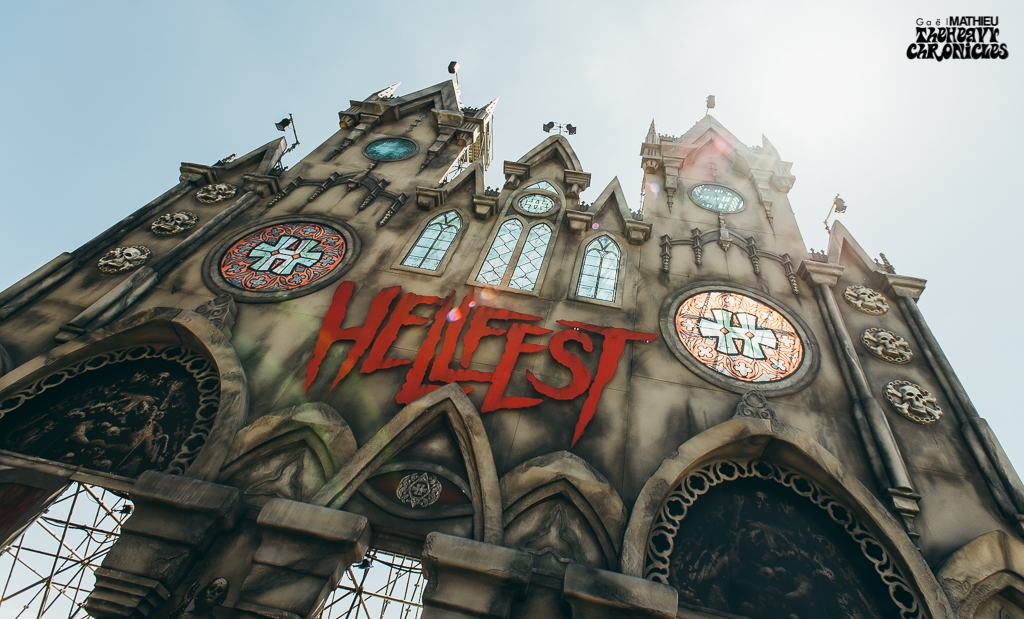 I first head to the press corner to deal with some work duties, and fail to catch my mates GLOWSUN opening the Valley. I’ve heard from the horse’s mouth that they played in front of quite a packed audience, and had a blast. Well, I have no doubt it’s true. After we bought our Cashless cards (very handy indeed!), we head again to the Valley to get our ass kicked for the first time today, by Kansas badass rockers THE MIDNIGHT GHOST TRAIN. The trio – whom most of us French peeps discovered at Glad Stone Fest in 2013 – plays a blues metal that’s heavier and greasier than a semi full of BBQ ribs. On the front row, the French fanbase is on fire, sending good vibes to the trio. It is possibly the biggest crowd the band has ever played, yet they don’t show an ounce of unsureness, dominating the stage, stomping like giants and turning the Valley into a motherfucking Heavy playground. The sound here is colossal, and I’m pretty sure the San Andreas rift re-opened during these thirty minutes of hulking fuzz. The Midnight Ghost Bulldozer, you say? Fuck yeah. 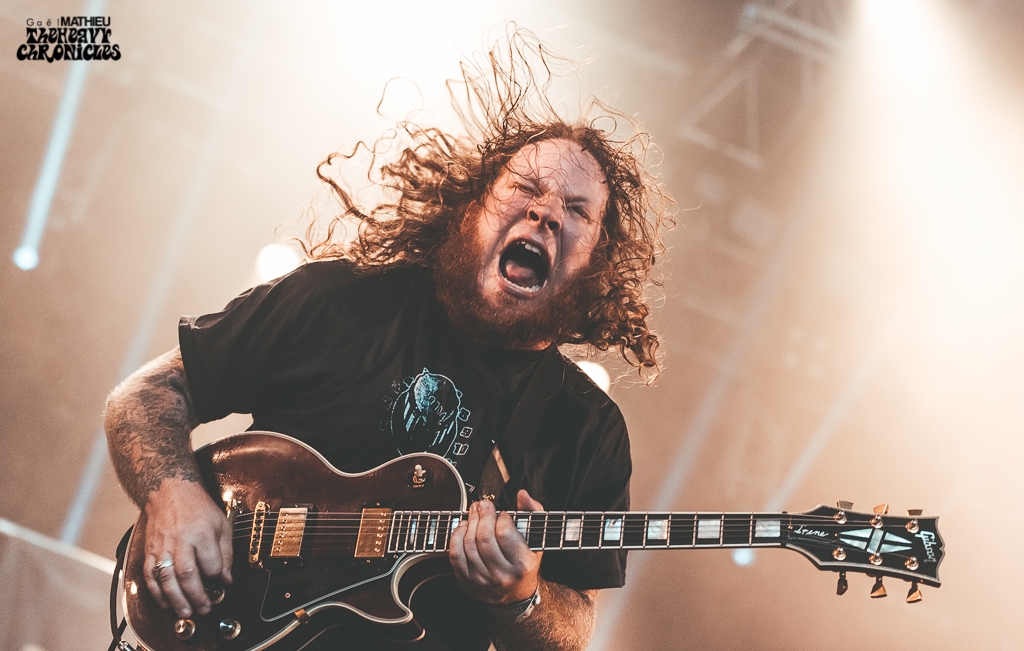 Now is the time for one of my fave German acts: SAMSARA BLUES EXPERIMENT. Despite they’ve been playing as a trio for one or two years now (second guitarist Hans Bob being now on bass), they still manage to recreate these incredibly hypnotic atmospheres on stage, and today especially, thanks to a polished sound. SBE do more than just playing heavy psych blues, or whatever you call it: it’s a mind-expanding experience. On the first rows, everyone has their eyes closed and a smirk on their face… but ONE DUDE. The dude, an old wasted and smelly punk, decided that the Valley tent during Samsara’s set was THE spot to improvise a juggling session. A security perimeter spontaneously forms around him, each one of us trying to get back to our top-flight psych session. Within four tracks – including a masterfully performed « Center Of The Sun » which makes me cry big tears – the German trio electrifies the converts, while the others have spent a great moment, although a bit to spaced-out for 1pm on a Friday. Hey, we weren’t all born with the 70’s spirit, I guess!

The sun is blazing in Clisson, and thanks to the Grass from Hell, the omnipresent dust that ruined our lungs last year is nothing but a dim memory. ORCHI(IIIIIIIIII)D are next on the Valley Stage. The US outfit (whom I’ve always got mixed up with Swedish… probably because they actually look like it) kicks off with some sound issues, especially with drums and vocals. Quickly, all gets back to how it’s supposed to be: the attack of the American Swagger. Their 70’s Sabbath-esque hard rock filled with testosterone does 80% of the job, while the Sirs’ natural class does the rest. Theo Mindell and his tight clothes holds the attention of a wholly feminine front row (again, shout out to the Italian fan girl who ruined my right eardrum)… Within forty minutes, the Californian foursome cover the greatest pieces of their discography, and even treat us to one or two tracks off their upcoming album « Sign Of The Witch ». And the Vintage Swagger Award of the weekend goes to Orchid! 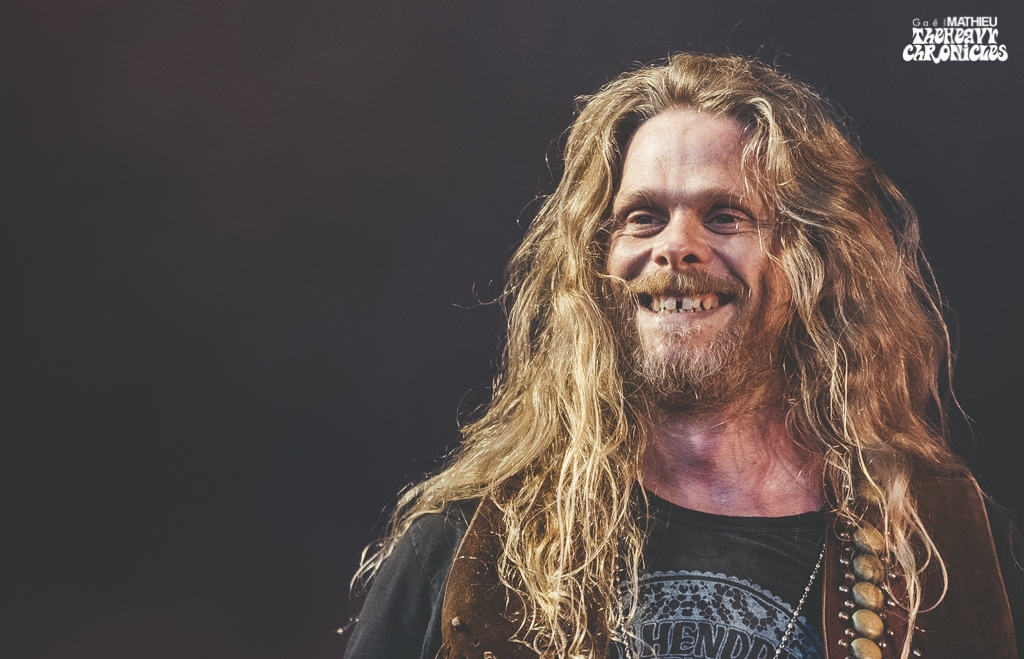 It is time. For HIGH ON FIRE. In the Valley. Oh yeah. I manage to make my way to the barrier, in order to get Matt Pike’s log in the face (sounds dirty, but it’s not, really). I spot Mastodon’s ginger riff officer Brent Hinds backstage, who’s having a blast playing air guitar during pretty most the entire show. It’s only 6pm, yet Matt Pike’s mega-metal slaughter machine is ploughing our brains right now, and is yet to become one of the Heaviest moments of the whole weekend. Even though I’m not familiar with their discography, I let myself being crushed by the Oakland trio’s unrivaled sonic brutality, and end speechless and numb. A good reason to rush to the nearest bar and get a fresh recovery beer! Cashless on fire!

The apéro with our media and promoter folks goes on, and some of us manage to catch the beginning of MOTÖRHEAD‘s show on the bar’s screen, to watch a lifeless Lemmy and his band having a hard time on Main Stage 1. It is so pathetic and depressing that I simply decide to step away and no longer watch the massacre. After a couple of pints and Jägerbombs, we all rush to the Valley in order to witness the one and only Loggers in Chief of the festival: MASTODON. As I saw them a few times indoor and outdoor, always with poor sound conditions, I really have no expectations other than having a good time. Fortune offers me a spot right at the barrier, with amped up friends all around me. Spoiler alert: these are not Lumberjacks of Heavy who are about to take the stage right now, but absolute fucking Stage Gods.

With a setlist based on their more recent stuff, the Atlanta foursome reveal a flawless technique and sound as well as a breathtaking presence on stage. When I think I was all meh before the gig, and now I’m completely disheveled and acting nutty front row. They got us – and I’m not talking about that intense wolf-like look Troy Sanders gave in our direction… fangirls of this world, I salute you! From the half of the set, things get damn serious with old school goodies like “Aqua Dementia”, “Bladecatcher”, and a brilliant finale on “Crystal Skull”. However, both the instrumental and vocal rendition are badass from start to finish,  and I think we’d all agree in giving a special mention to octopus-man Brann Dailor, who’s definitely the best drummer/vocalist in metal. This is how you get beaten by MASTODON, with a proper sludge metal spank on your bare ass, in the middle of the forest!

The night ends as standard: crazily. After we got to experiment all the bar’s drinks with the Mos Generator dudes and randomly watch an improvised batucada session at the Metal Corner… Well, we don’t have much time to sleep left, but heeeeeell, it feels good to be home!

READ REVIEW OF DAY 2 AND DAY 3