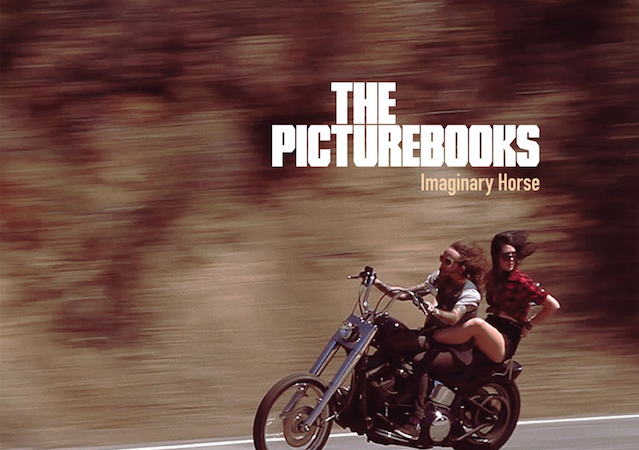 Making the most of the frenzy induced by their seductive first single “Your Kisses Burn Like Fire“, German duo THE PICTUREBOOKS unleashed today their third effort “Imaginary Horse”, a captivating garage blues record that will take you for a ride under the blazing sun of the Mojave desert, and way beyond. These two passionate bikers/skaters crafted something brilliant here, something that will easily raise them to “rock revelation of the year”. There are records you need to listen to dozens of time before really getting into them and capture their essence. And there are some rarer records that move you deeply from the very beginning. “Imaginary Horse” opens on the low and warm voice of singer and guitarist Fynn Grabke, simply accompanied by Philipp Mirtschink’s bass drum and claps. Even though it’s only an introduction song, it reflects everything this album has to offer: raw and organic music, additive-free rock, and the sensation of being constantly with them in this garage full of tools, old choppers and second-hand guitars. Just put headphones on your ears, it’ll only take a few minutes before you get massive goosebumps.

From the very first songs, you disconnect from reality and your mind starts wandering in wild and arid landscapes where only Joshua trees, reptiles and birds of prey belong. You feel that dry scorching wind lashing your cheeks, a thrilling feeling of freedom takes hold of you… You’re ready to hit the road. This odyssey smells of hot asphalt, leather and dust, but it also feels like crossing the West and the Rocky Mountains. I’m actually pretty sure that the meaning behind this “imaginary horse” is not only choppers and bikes, I have the sense there’s something more tribal behind all that. Listen to “1000 Years Doing Nothing” and you’ll be thrown right into the middle of a Native American ritual. Your imagination will do the rest…

I already hear the – oh so unoriginal – comparisons to the Black Keys from afar, owing to the minimalist production and rough blues style. Except that a very different vibe emanates from THE PICTUREBOOKS’ music. And contrarily to the aforementioned Americans, riffs are far from being at the center of the equation: at times thick, purring, slide or acoustic, the guitar mostly remains as a background instrument that supports vocals. What makes this album so original and spirited, is indeed the intensity that comes out of this voice-percussion combo: incredibly subtle and stirring, each whisper is like a caress, each scream, a relief, while the different types of percussions used by Philipp infuse the songs with a lot of roundness and volume. The more I listen to this “Imaginary Horse”, the more I feel like hearing its heart beat.

THE PICTUREBOOKS are really inventive guys, displaying the same ingenuity they use when fiddling with old motorbikes (on that note, there’s a pretty cool documentary about the band here), giving a fresh boost to a genre who hardly gets off the beaten track. If “Imaginary Horse” was a movie soundtrack, it’ll be halfway between “Black Snake Moan” and “Into The Wild”, for its intense, sensual yet very introspective side. There is so much soul in there, that it’s irresistible. So if you’re not afraid of getting completely obsessed by a record, to the point of listening to it in a loop day after day, go for it : “Imaginary Horse” was made for you.